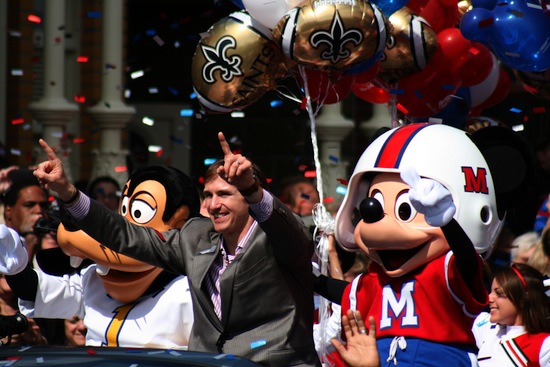 The Magic Kingdom Philharmonic Band came marching down Main Street, U.S.A., this morning behind New Orleans Saints quarterback Drew Brees. He was riding in a pewter convertible with Mickey Mouse, waving to cheering fans. But he’d earned the ride – and the adulation – Sunday night by marching the Saints to a 31-17 victory over the Indianapolis Colts in Super Bowl XLIV in Miami. 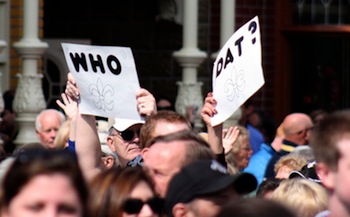 Celebrating Super Bowl heroes in “I’m Going to Disney…” commercials and rides down Main Street, U.S.A., at Walt Disney World Resort and Disneyland Resort has been a grand tradition since 1987 and Super Bowl XXI. But this one was unique, involving a team and a city overcoming so much adversity that its fan base goes by the nickname “Who Dat Nation.”

As confetti cannons sprinkled Brees with multi-colored paper, it symbolically showered away 42 seasons of “wait till next year.” The waiting had ended at Sun Life Stadium in Miami Gardens, thanks in a big way to a torrent of pinpoint passes by Brees, who earned the Super Bowl MVP honor with a 32-completion, 288-yard, two-touchdown, no-interception performance.

Joining Brees for his celebratory ride, along with Mickey Mouse in his football outfit, were Minnie Mouse (decked out as a cheerleader), Chip ‘n’ Dale in referee garb, and “football Goofy” plus players from a central Florida NFL Youth Football team.

Brees’ celebratory visit happened mere hours after he was featured in the 42nd “I’m Going To Disney…” commercial, a series that has featured a lineup of people from sports and beyond who have exclaimed the iconic line following milestone accomplishments. 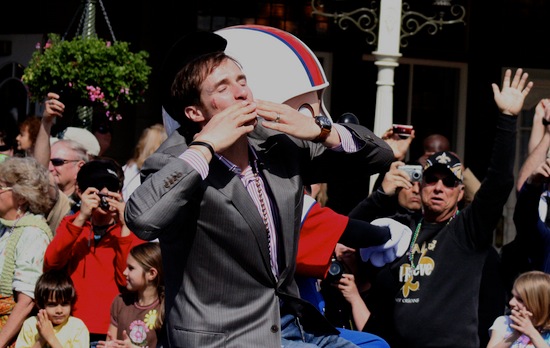 Got talent? Show it off during 'America's Got Talent' auditions this weekend at the Universal Orlando Resort

wow. attractions magazine is the best. you have better footage than disney actually did. and i LOVE LOVE LOVE your new opening intro.

also cool that the mickey baloon gets stuck in the tree.