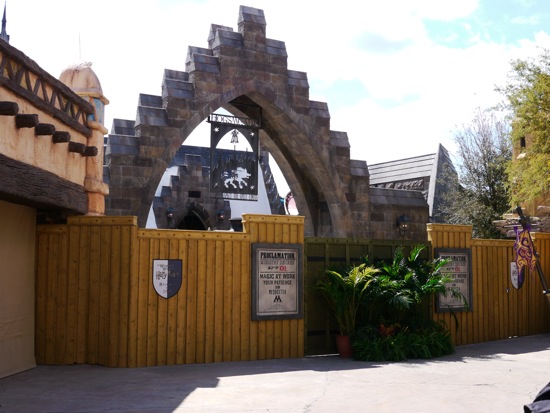 A lot has been happening this week at The Wizarding World of Harry Potter at Universal’s Islands of Adventure. It’s a scurry of activity all around as they’re putting the final touches and getting ready for opening. As you can see above, they’ve taken down the old construction walls and have added these “prettier” walls that have a wide door ready to open. There have been rumors of a soft opening any day now, but no confirmations.

Universal just released this video which offers a peek at some filming for the brand new Harry Potter and The Forbidden Journey ride. They’re promising more details on the ride and an opening date announcement at noon next Thursday, March 25. 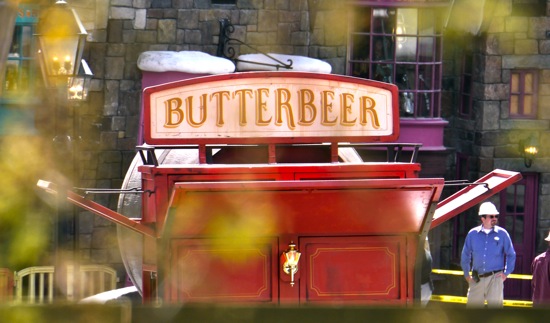 If you look just beyond the new construction wall you’ll see this large barrel on a stand-alone cart, which will be used to sell Butterbeer. 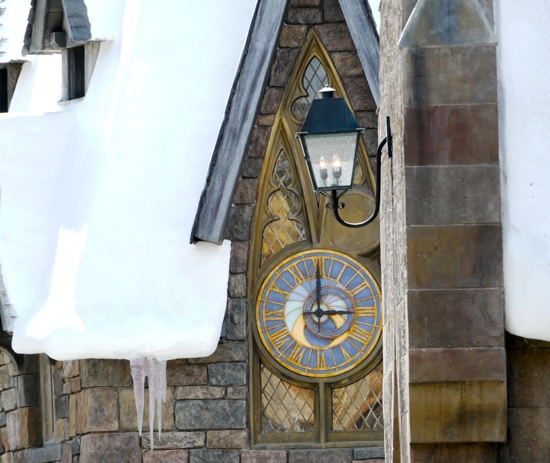 This clock in Hogsmeade Village was right on time. 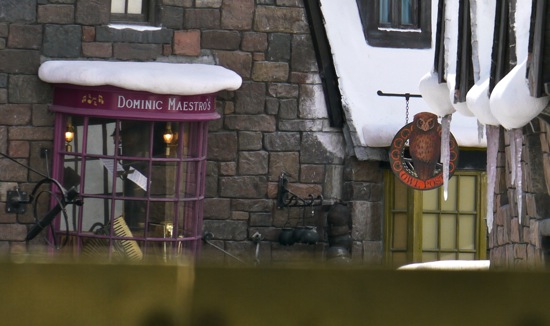 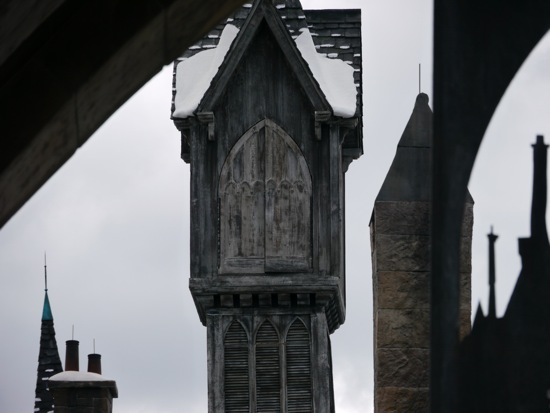 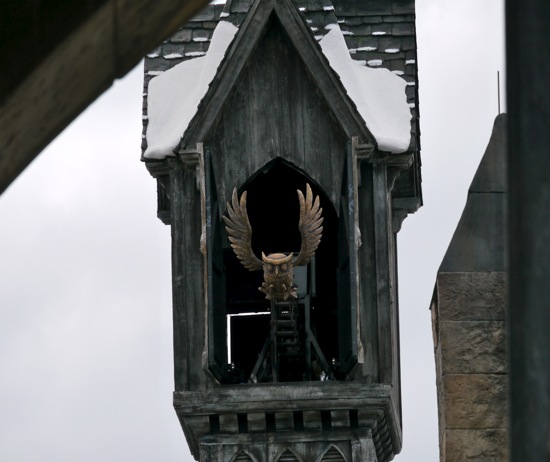 Look up and you’ll see this tower. Keep watching as an owl makes an appearance. View the video below to see it in action. 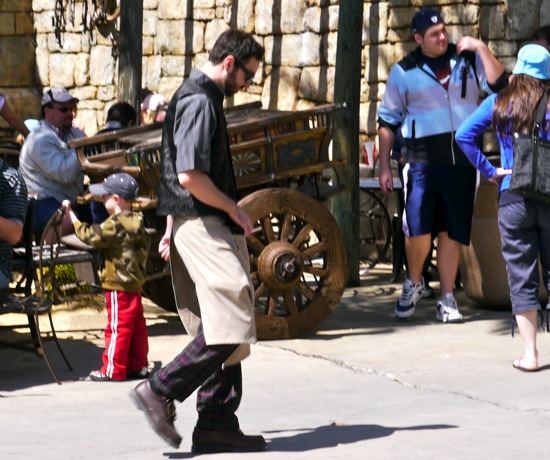 It’s not one of the more interesting costumes, but here’s one of Universal’s team members from Wizarding World passing by. Others have reported seeing wizard robes and kilts on some team members. 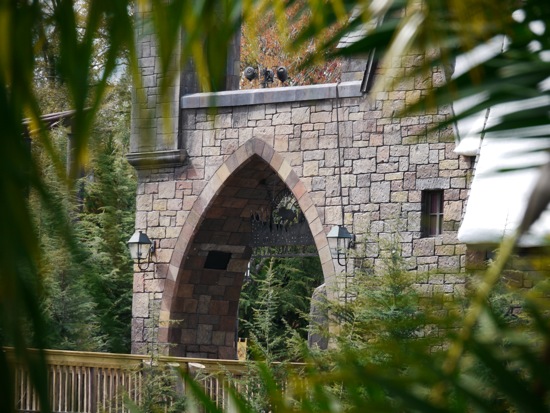 This will be the back entrance into Hogsmeade from the Jurassic Park area. The hanging sign says “Welcome to Hogsmeade”. 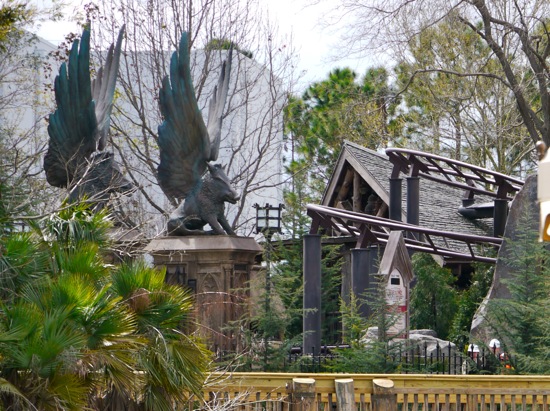 Look towards the Flight of the Hippogriff ride and you can see the entrance to Hogwarts Castle and the wait time board for the new ride. 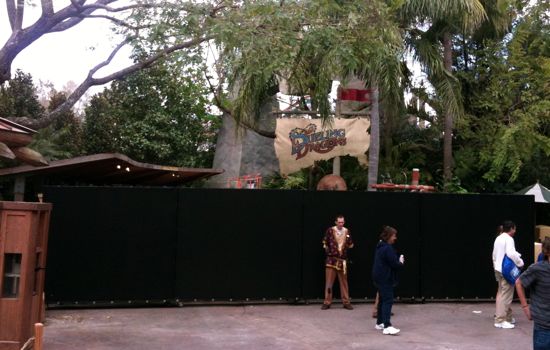 The Dueling Dragons roller coaster has been closed for a while but it’s reopening tomorrow, March 19. The entrance to the ride will still be back in Jurassic Park, and it’s supposed to still be called Dueling Dragons. It’s not known if it’ll close again before it becomes the Dragon Challenge ride. 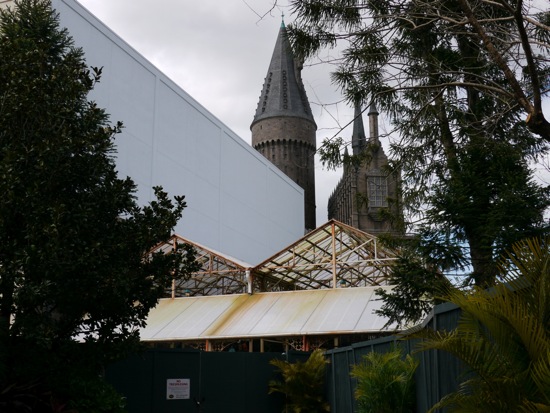 This greenhouse runs along the side of the castle and will serve as a queue for the new Forbidden Journey ride. 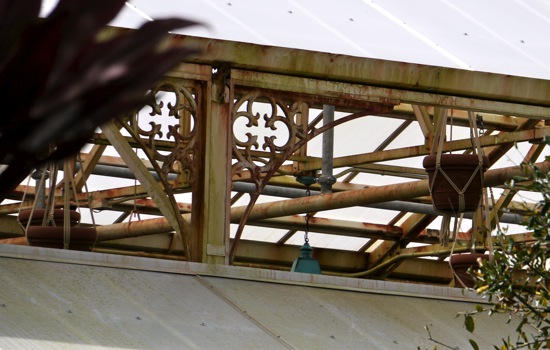 A look at some of the pots hanging in the greenhouse. 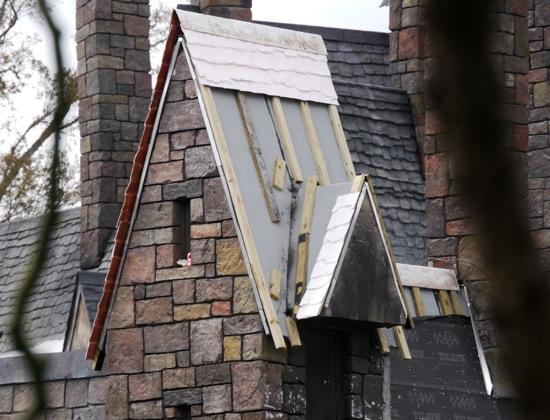 Not everything looked ready to open. Here you can see they still have a little bit of work left to do.

Video of the new Tronorail at Walt Disney World

I know that the main ride is supposed to be amazing and I know it probably will but Hogwarts Castle looks a bit small to me. I don’t know if I just need to see it in person but it just looks small.

We’re staying at Universal from 3/31/10 until 4/5/10. Thanks for this encouraging update! This will be our fourth vacation at Universal Orlando — we love it and hope that maybe we’ll catch the “soft opening” while we’re there. If not, we will be back…

Ok. You need to see the castle in person. It will take you breath away. They use a theme park trick called forced perspective so it looks bigger than it actually is and in person, it towers above you. My friend who is and employee said that the new main ride is epic. He said I wont believe my eyes!