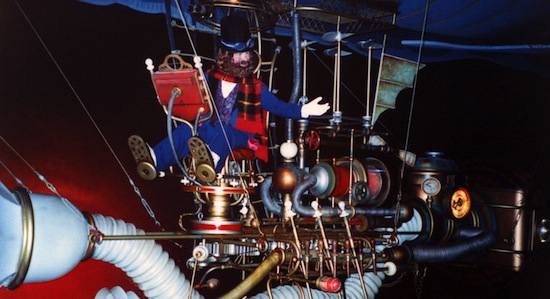 “One little spark of inspiration,
is at the start of all creation.”

I can’t tell you how often I have an internal debate about what to write for Retro Orlando. Mostly because it’s tempting as a writer to feel the pressure to always write something new. But in a column about rides and shows that are long gone, that’s an impossible goal. So this month, I decided to give in and go with it. After all, the louder the buzz on the Internet about attractions now gone, the more beloved they were. Consider this a part of your group therapy for theme park nostalgia.

What I really want to talk about this month is Dreamfinder, the beloved and bearded magician that used to accompany everyone’s favorite purple dragon, Figment. His home was the Journey into Imagination ride from 1983 to 1998. Dreamfinder was once so popular that he was featured in Walt Disney World commercials and as a live character performer. He became a symbol of an era at Epcot. Though 15 years is a long stay, many have wondered why Dreamfinder was ousted from the ride after such a long and successful run.

Of course, by saying I want Dreamfinder back, I’m inadvertently saying that I want Eric Idle gone. This doesn’t really ring true with me exactly. The new version of the ride is just different. Not better or worse, per say. Just a bit more sparse story-wise and tough to get used to for those of us that grew up with Dreamfinder. Eric Idle is a legend who spent years with the irreverent English comedy troupe Monty Python’s Flying Circus. He portrays Dr. Nigel Channing in the current version of the ride, now called Journey into Imagination with Figment. His wry humor makes kids giggle as Figment pesters him and interferes with riders’ experience through his Imagination Institute. The buttoned up Dr. Channing is a far-cry from the ride’s original host. 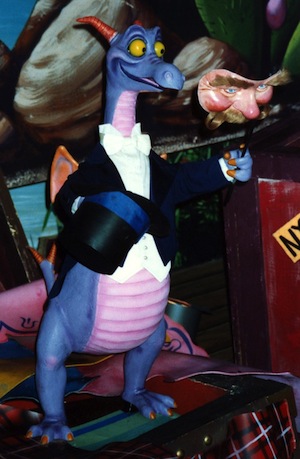 The jovial and free-spirited Dreamfinder was a character that could have just as easily turned up in a Terry Gilliam movie. He was shades of Moony B. Finch., he was equal parts Merlin and Santa Clause. He taught riders of all ages to remember the joy of what they could conjure with their creativity and imagination. As adorable as Figment is, and as much as I love him, without Dreamfinder, Figment just isn’t the same. Figment was once cute and cuddly, an innocent Muppet type that riders could connect with. With the change in show, he’s now more of a Cheshire Cat trickster.

But we’re missing a piece of the puzzle now and that may be what’s responsible for the shift in Figment’s tone. After all, Figment was originally a literal figment of Dreamfinder’s happy imagination. During the original ride, Dreamfinder sings Figment into creation during the plot, “Two tiny wings, eyes big and yellow, horns of a steer but a lovable fellow. From head to tail, he’s royal purple pigment, and there, voila, you’ve got a figment.” From there, the two co-hosted the ride together.

When Dreamfinder and Figment used to harmonize the end of Journey into Imagination singing, “Imaaagination, Imaaagination. A dream can be a dream come true, with just that spark in me and you,” the story arc of the ride was complete. When I talk to people in my age range and I mention Journey into Imagination, most of them begin singing this very stanza from the original ride music titled “One Little Spark”.

Many guests, not knowing about the original ride, don’t seem to mind this new version too much and probably don’t think about it at all. But I wonder what kids who only ride this modern version think about Figment. Where did he come from? Is he good or bad? The tone of the ride now is more sassy and mischievous, but it’s origin in the ’80s once saw it as a populist and sugary free for all with a very intentional message.

I think when people talk about missing the character of Dreamfinder, part of what they miss is that no-holds-barred, empowering ’80s tone. Back then, the humor and tone of rides didn’t have to be sarcastic or self-aware. They could just exist, no matter how cheesy they may seem today. To top that off, Epcot was once the home of many after-school special type live shows and rides meant to be unabashedly educational. (Like the long-gone Food Rocks that taught kids about nutritional value.) 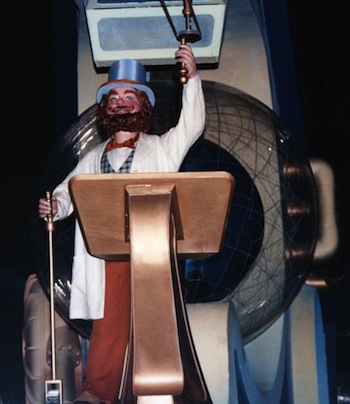 Between that and the densely decorated sections of the original Journey into Imagination, with their almost Haunted Mansion level attention to detail, the ride was a testament to the excess of the ’80s. (In a good way.) Going back to watch ride videos from the original version, it’s easy to be astounded by the intricate paint jobs in the queue alone. The level of artistry was astounding for its rich style and explosion of colors.

I’ve noticed a lot of sentiment toward Dreamfinder on the Internet. On YouTube videos that house the ride’s original song, complete with Dreamfinder’s narration, dozens of people are there to comment. “Bring back Dreamfinder!” most of them say. So what is it about this character that makes him so beloved? After all, we’re not just talking about an incarnation of a ride. This character used to interact with guests in the park.

For starters, he was original. He wasn’t from a film, but as a character he was intriguing enough to carry the storyline of an entire original ride. Something about him felt authentic. Second of all, if we were to believe that the ride was a manifestation of Dreamfinder and Figment’s imaginations, then they were boundlessly creative. In a Willy Wonka-like experimental playground, guests were welcomed into the inner workings of these character’s thoughts on artistic inspiration.

This made Dreamfinder something of a teacher, an art and writing instructor. Many sections of the ride taught kids about genre, specifically mystery and adventure, even citing Edgar Allen Poe with a large book prop of The Raven. During the mystery section of the ride, Dreamfinder was seen playing a keyboard of words writing a story into existence. In other places, Figment was seen painting literally, but the message was figurative. There was also an entire section devoted to stagecraft and performance. Journey into Imagination was once something of a love letter to professional artists and helped kids make the somewhat high-minded connection between the imaginary reality of Disney parks and the many professional artists that it took to staff them. It was like a fake peek behind-the-scenes. A preemptive answer to all of the, “How can I do that?” questions parents were sure to get upon their return home from vacation.

Like a living episode of Reading Rainbow, Dreamfinder was urging guests to go home and create. Maybe the direct educational value of the ride, urging people to read and think, is the quality that I miss most of all. Though the message is still intact, use your imagination, the ride now lacks the “how” that it used to provide with answers and examples about writing and creating. Through the transformation from an actual journey through imagination to a science lab that studies imagination, I wonder if designers may have been too successful in creating that sterile lab-like feel.

If Dreamfinder made an impact on you back in the ’80s and ’90s, leave a comment sharing why you think his character had that magical “it” quality that may be lacking in the show today.

The original Journey into Imagination ride: