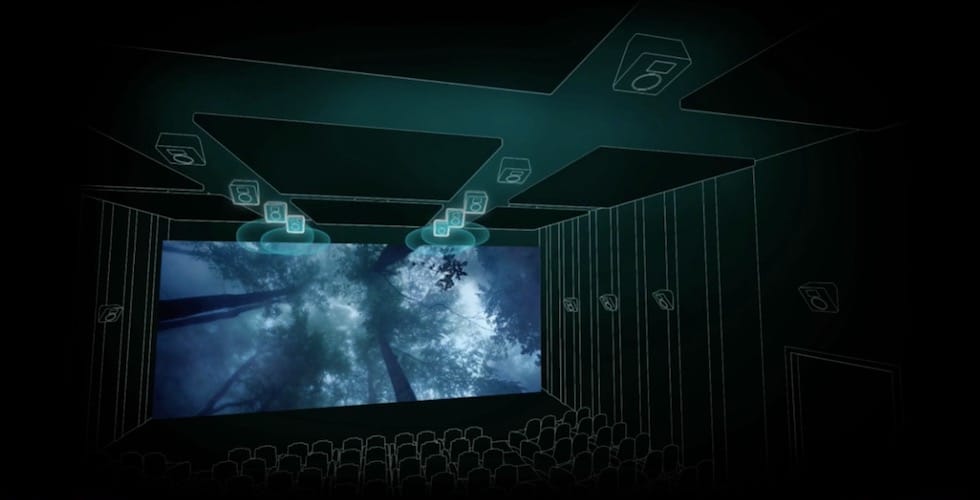 The recently opened Dolby Cinema at the Disney Springs AMC theater brings a new type of moviegoing experience to Orlando. With state-of-the-art picture and sound, you’ll experience films in an all-new way, without gimmicks.These theaters started cropping up all over the world around three years ago, according to Chris Kukshtel, director of Dolby Cinema. “We work with exhibitors like AMC, and find one of their auditoriums typically within their complex. Then we go in and work with AMC or the exhibitor to build out a room that includes design elements, our image technology and our sound technology,” said Kukshtel.

Thanks to Dolby Cinema, I had my first experience with them seeing “Star Wars: The Last Jedi” at the Disney Springs AMC. Upon entering the theater, I saw what is called the Dolby digital entry display, which is a hallway-spanning screen that showcases a special animatic for the film being played inside as you walk into the theater.

“[The digital entry screen] is in a few locations around the U.S., and because Disney Springs was a special cinema for us, we wanted to make sure we put one in there. That is a way to get guests interested and excited about the film they’re going to see. We typically work with studios to create those,” said Kukshtel.

Once inside, I was blown away by just how large the screen was, and how every seat seemed to avoid obscuring the view of the one behind it.

“We want to try to be as pure to the presentation as possible, […] all of the Dolby Cinemas at AMC have recliners in them, and those recliners insure that all the sightlines are perfect, so you’re not staring at someone’s head in front of you or kicking somebody’s seat,” said Kukshtel.

The seats were equipped with the ability to recline, which I loved. I always find it a bit uncomfortable to sit for longer films in standard movie theater seats, and with “The Last Jedi” having a runtime of two hours and 32 minutes, I knew I was in for a treat.

Before the movie started, a short clip displaying the differences between Dolby picture versus standard theater quality was shown, and it truly displayed the differences. The blacks were deeper and darker, the colors were more vibrant.

“In a typical cinema, you’d have a single projector that’s powered by a standard or xenon bulb, and that gives you a certain level of performance, brightness and contrast,” said Kukshtel. “The Dolby Vision projection system has Dolby Vision dual laser projectors, and that means we actually use laser light instead of a xenon bulb to provide the light output for the projector. It’s using laser light to give twice the brightness of a standard cinema as well as a higher contrast – the images are really popping off the screen.”

The typical contrast ratio, which is the difference between black and white, is about 2,000 to one. In a Dolby Cinema, that ratio is over a million to one. This gives really sharp, crisp images, allowing you to see things on screen that you might have missed with a lower contrast projector. There are also more colors that can be visible when watching in a Dolby Cinema, which helps audiences see more of a real-life image that is incredibly close to what they see and experience in reality.

Once the film started, I realized that not only was I going to get the best picture and sound, but also a unique viewing experience, thanks to the vibration capabilities of the seats. With every shot of a blaster and explosion of a ship, my seat responded with a corresponding rumble.

“All the seats do have a transducer, or a shaking mechanism in them that will vibrate slightly in certain parts during the film,” said Kukshtel. “We want to make sure that you are immersed in the experience.”

The vibrating seats weren’t too much for the experience, and didn’t take me out of the film’s world while I was watching. I found this to be a great alternative for those who find the 4DX experience to be too much or too distracting, but still want a unique and exciting moviegoing experience.

During the film, I was blown away by the picture and sound quality. Every sound offscreen was heard in the direction it was made, thanks to the moving sound technology of Dolby ATMOS and the X-Y-Z formation of speakers in the theater.

“This allows creators to place sounds anywhere in the room in that X-Y-Z plane. With Dolby ATMOS, each [speaker] has its own amplifier and a specific sound is coming out of each of those speakers,” explained Kukshtel. “It gives you a higher resolution of sound in that room. We also put speakers in the ceiling, which gives you a more immersive experience, so you literally have sounds coming from all around you.”

With my prior viewing of “The Last Jedi” being IMAX 3D, I hadn’t realized just how much darker the viewing glasses made the colors in the film. Seeing it in Dolby Cinema without glasses showed me just how crisp and vibrant the film’s colors were, especially in the sequence on the rebel planet Crait.

“In certain cases, AMC may choose to do 3D, and if they did, the 3D is about the same brightness that you would normally see in 2D films,” said Kukshtel. “It really depends on the market and the exhibitor of the film, some are designed for 3D and some aren’t.”

However, as much as I enjoyed the entire film experience, I did end up finishing my evening at the theater with a headache as a result of the combination of the loud audio, visuals and seat vibration. It was a bit intense for me, though that won’t keep me from seeing another film in the Dolby Cinema in the future.

Overall, I truly enjoyed my experience with Dolby Cinema at AMC, and found it to be a pure and true-to-film option for seeing movies. I will definitely be returning for the next blockbuster on my list.

Currently, the only Dolby Cinemas in the Orlando area are located at the Disney Springs AMC and the Altamonte Springs AMC. To learn more about Dolby Cinema at AMC and its offerings, visit amctheatres.com/dolby.