Ripley's scores a touchdown with football portrait made of BBs 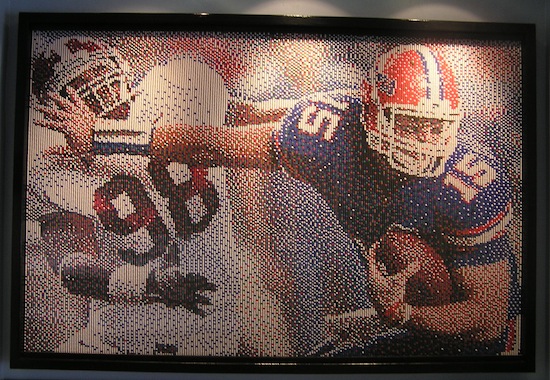 He may have lost out on the Heisman Trophy this year, but Florida Gators quarterback Tim Tebow can claim an honor few others can – an image of him in action currently graces the walls of the Ripley’s Believe It or Not! museum in Orlando. But this is Ripley’s, so that means this is no ordinary portrait. Ripley’s has acquired a Tim Tebow mosaic made from more than 46,000 Airsoft BBs – the plastic balls used in a popular type of BB gun.

The artwork was created by Gainesville artist John O’Hearn. O’Hearn is primarily a sculptor, but has spent the last few years experimenting with Airsoft BBs as a medium. The BBs act as pixels in the mosaics he creates.

O’Hearn says he can recreate any picture or portrait from just five colors of BBs – red, green, blue, black and white – a challenge when your subject is wearing Gator orange. Red BBs are used in the helmet, but O’Hearn mixes them with green and white BBs to make the Florida orange.

The Tebow mosaic measures approximately four feet by six feet. It contains 227 tubes, and each tube contains 204 BBs – for a grand total of 46,308 tiny plastic balls.
O’Hearn is a grad student in the arts program at the University of Florida – a proud member of the Gator Nation and a big Tebow fan. “It’s a nice way to honor him for all he’s done for Gator fans,” said O’Hearn.

According to Edward Meyer, vice president of Exhibits and Archives, O’Hearn and other artists are putting a modern-day spin on the style of pointillism.

“What they are doing is related to French Impressionism from the 19th century,” said Meyer. “But they are utilizing computer technology and different media to create some amazing works of art. This example is remarkable because of the enormous number of balls used.”

Tebow joins an exclusive list of unique celebrity portraits now hanging in Ripley’s Believe it or Not! museums worldwide, including President Obama, Michael Jackson and Dean Cain all made from gumballs; Eminem made from M&Ms; Princess Diana made from dryer lint; and Madonna made from junk mail.

The Tebow portrait is currently available for public viewing in the lobby of the Ripley’s Believe It or Not! museum in Orlando. It may become a permanent exhibit. The portrait can be seen for free, but normal admission is required to tour the museum.

Ripley’s Orlando Museum is located at 8201 International Drive. The hours are 9:30 a.m. to midnight daily.

You can find out more about artist John O’Hearn at ballmosaics.com.

Photos/Video: Out of This World exhibit showcases movie and TV costumes and props

Go ‘Over the Edge’ to support Give Kids...

Ripley’s Believe It or Not to hold...