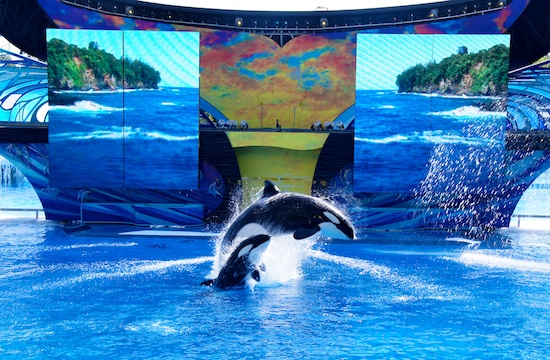 SeaWorld’s new Shamu show made its world premier today in Orlando with special appearances and a fireworks finale. Earth Day makes a fitting day for the show that promises to present an inspiring and educational message that both humans and animals are part of one world, one ocean. Let’s take a look at some of the highlights.

The whole show is more than 20 minutes long. It’s best seen in person, but below is a video showing some of the highlights. Scroll down to see our full photo gallery and more details from the show. 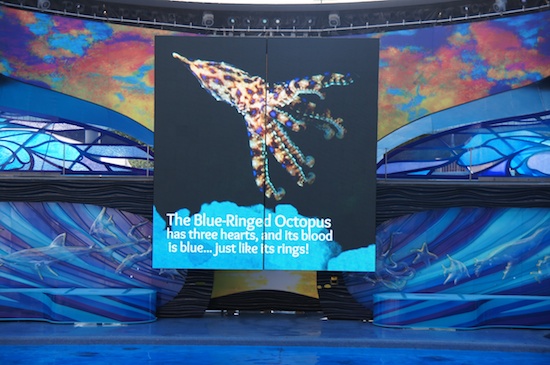 Before the show begins, guests will see many animal facts on the screen along with a pre-show video. They’ll also see a warning to guests sitting in the lower sections – you will get wet. 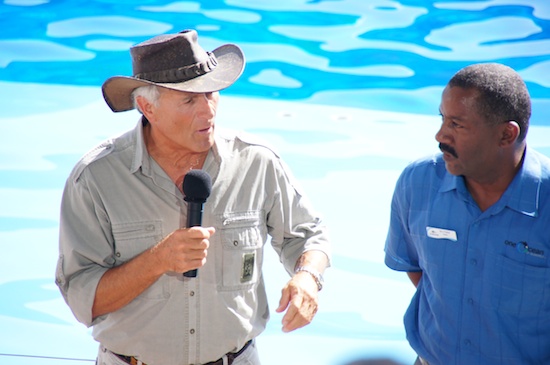 Animal expert Jack Hanna spoke just before the show. He talked about how the behaviors the whales do in the show are the same behavior he sees them do in the wild. Watch episode 22 of Orlando Attractions Magazine – The Show for more from Jack Hanna. 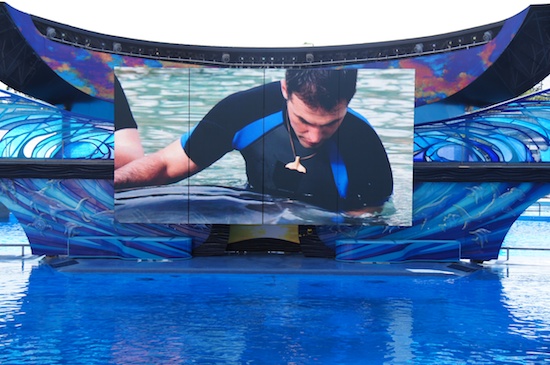 The familiar wooden whale tale necklaces that were prominent in the Believe show still make an appearance in video portions of One Ocean. No doubt, they’re still for sale in the gift shops as well. 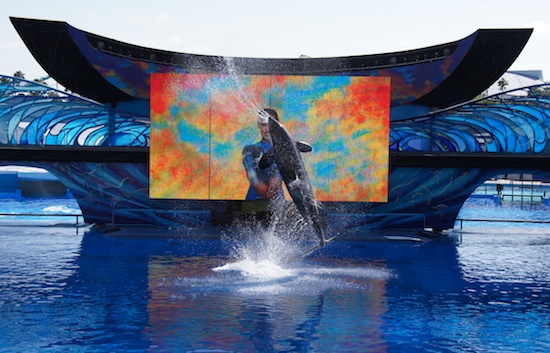 The show began with a bang as this mighty whale not only jumped high into the air, but also spit water into the air. 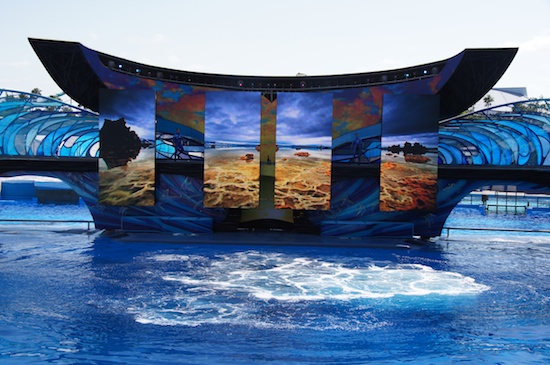 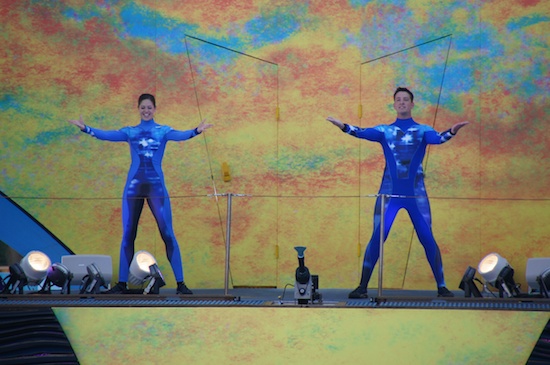 Here’s a look at the new trainer outfits. After the show, we noticed these are just skins they’re wearing on top of their old Believe wetsuits. 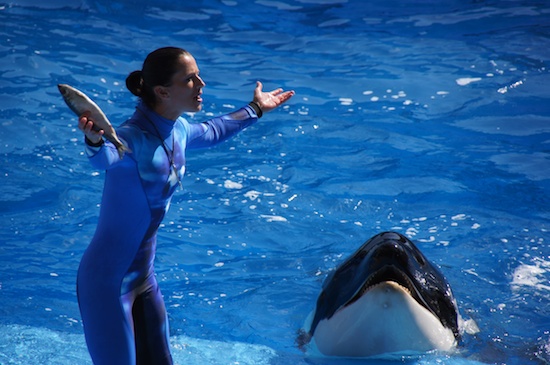 The show also includes a bit of humor. Here, the whales shake their heads no when the trainers try to give them small fish. This is a gag that was added to Believe when the show was reworked without the trainers in the water. 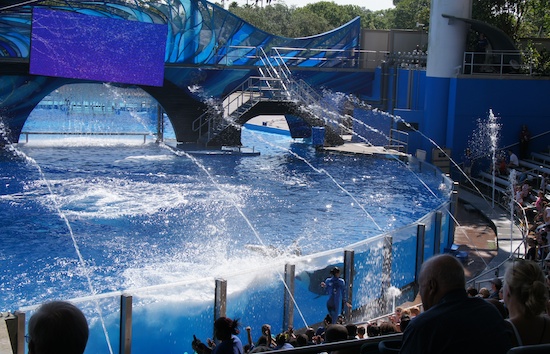 A look at some of the 35 programmable fountains. Some at the base of the seats shoot straight up and come down on guests. The fountains not only provie effects for the show, but also serve as enrichment for the whales during playtime between shows. 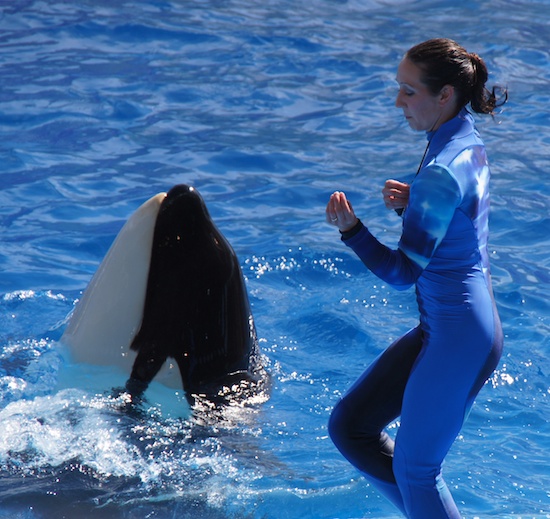 A trainer and whale “dance” to the music. The show features three different original songs: One Song, Side by Side and We’re One. 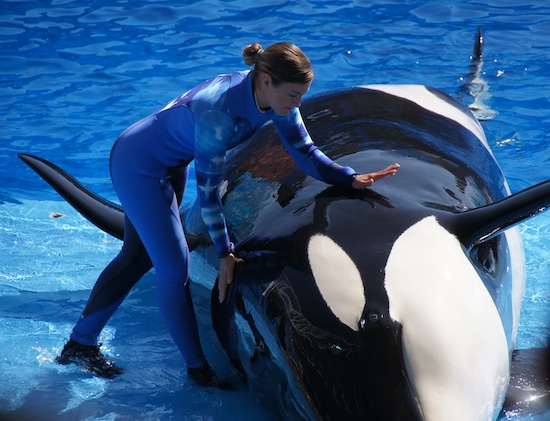 Although the trainers don’t get into the water with the killer whales, they do get really close to them when they’re out of the water. 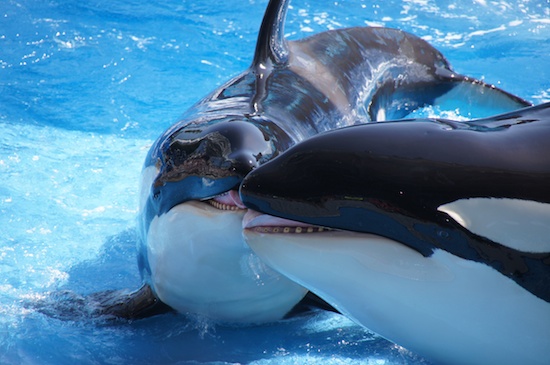 A part of the show presents the whales interacting with each other. Here they seem to be kissing. 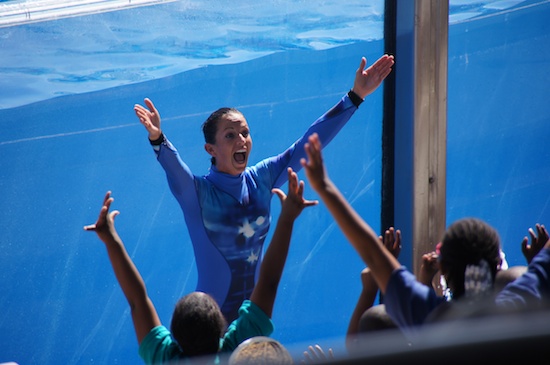 The trainers interact with the audience. 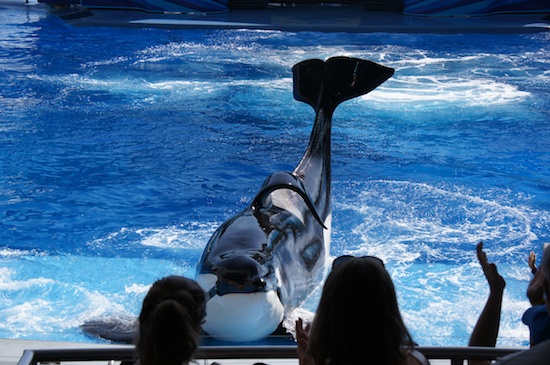 When it came time to splash the audience, SeaWorld’s largest whale in captivity came out – Tilikum. 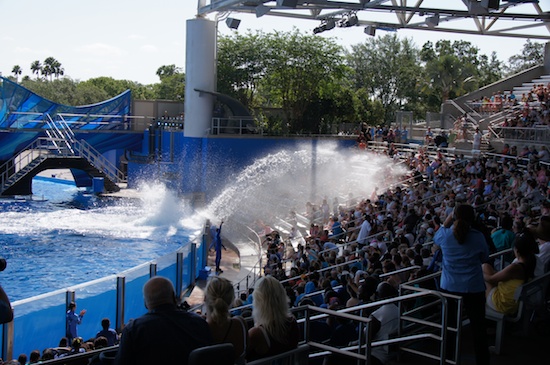 No one in the lower seats is safe with Tilikum splashing.

Towards the end of the show there are a lot of whales performing different acts all around the stadium. But they always come back here for their reward. 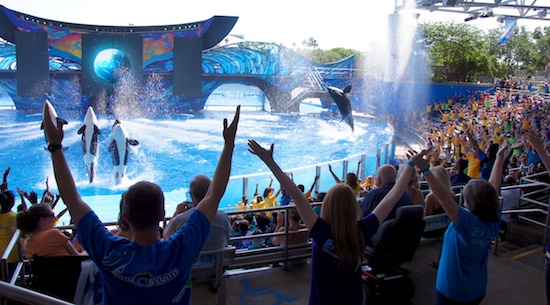 For the first showing only, the stadium filled with a choir of 600 people wearing colorful One Ocean T-shirts. 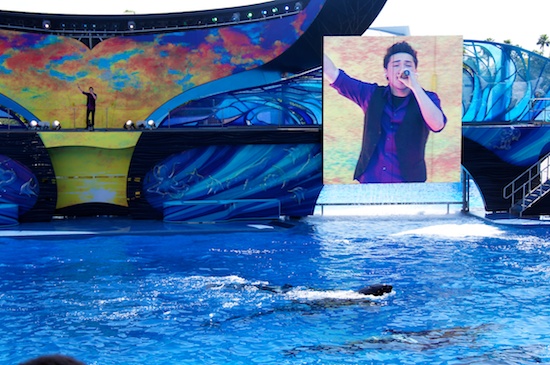 After the show ended, artist Spencer Lee came out to sing the show’s signature number, One Song. Spense has made appearances on numerous TV shows including Greek and Glee. 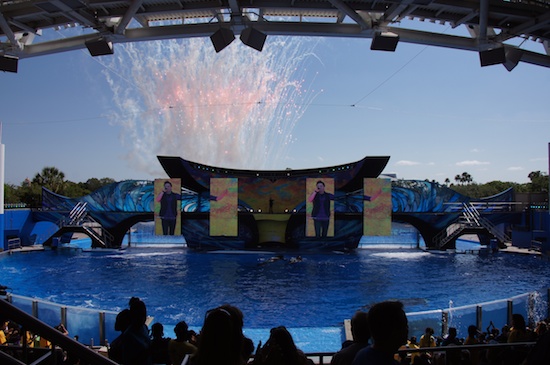 And as he ended the song, fireworks shot off behind the stadium.

Here’s a panoramic look at the newly decorated stadium. 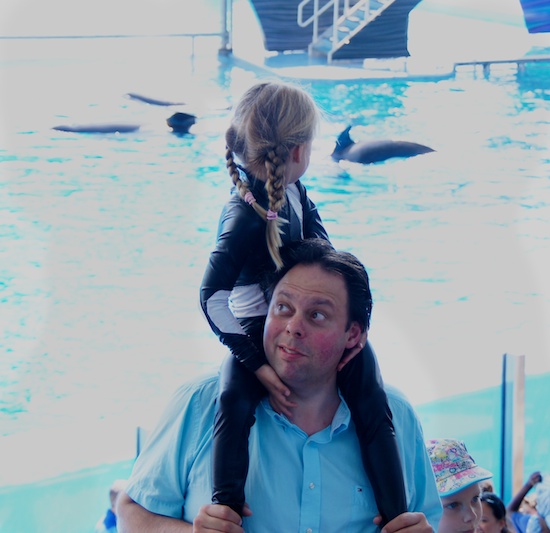 This little girl was excited to see the whales. She wore her Believe trainer outfit. 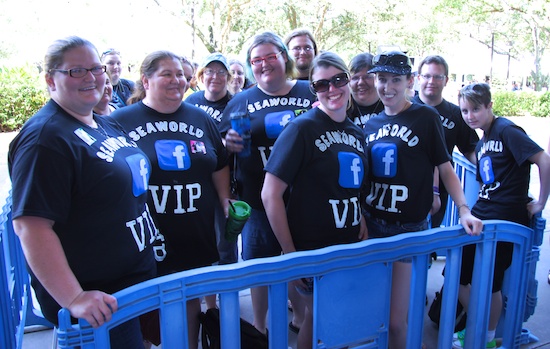 As soon as the 10 a.m. show ended, guests were back in line for the 1:30 p.m. show. This group of fans who met through SeaWorld’s Facebook page were first in line. 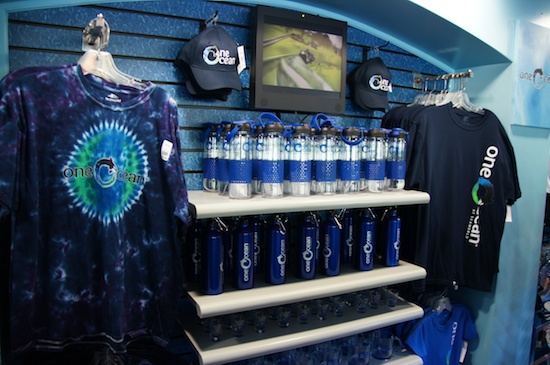 Here’s some of the One Ocean merchandise on sale throughout the park. 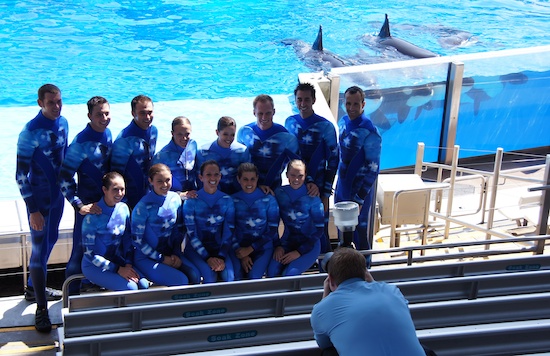 After the audience had left the stadium, the trainers gathered for a group shot in their new outfits. Notice the whales nearby, probably wondering what was going on. 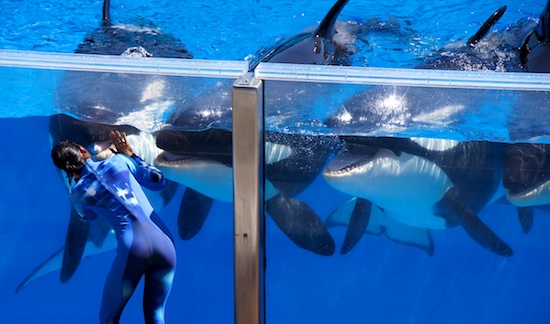 After the group photo, one of the trainers decided to come down and play with the whales. Here the whales are lined up for her to give them each a kiss through the glass.

Stars in the Parks: Ke$ha meets the White Rabbit at Magic Kingdom

Get a behind-the-scenes peek with SeaWorld Orlando’s...