The Shanghai Disney Resort is the first Disney resort in mainland China.

The Shanghai Disney Resort has officially celebrated its grand opening. The first Disney resort in Mainland China and the sixth worldwide, is one of Disney’s most ambitious projects ever. The wonder and imagination of Disney greeted the people of China in magical new ways as the gates opened to Shanghai Disneyland, with the biggest, tallest castle in any Disney park, the first pirate-themed land and Disney’s most technologically advanced park to date.

Bob Iger, chairman and chief executive officer, The Walt Disney Company, celebrated the opening with thousands of distinguished guests, celebrities and Chinese officials. “The grand opening of Shanghai Disney Resort is a celebration of creativity and collaboration, a triumph of imagination and innovation, and a testament to the strong partnership between Disney and China,” Iger said. “Together we have created an extraordinary destination, a magical place unique in all the world, where East meets West, the past meets the future, and anything is possible for those who believe. It is our sincere hope that this spectacular place will inspire wonder and create joy for the people of China for generations to come.” 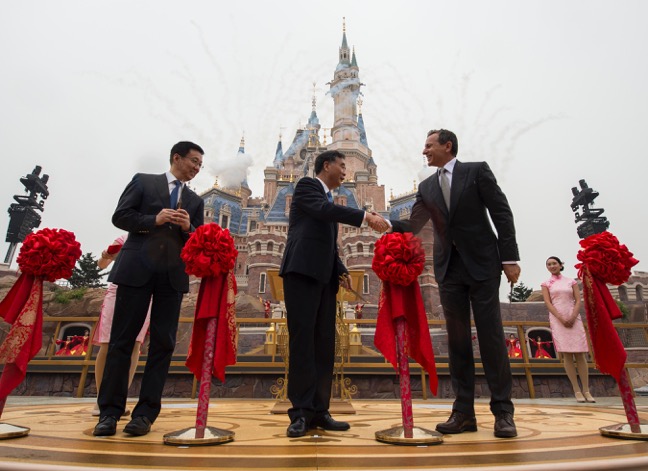 Shanghai Disney Resort celebrates the a joining of Disney and Chinese culture.

Honoring the Disney-Chinese partnership that created this resort, Iger and Chinese officials cut a red-and-gold ribbon to dedicate Shanghai Disneyland, the resort’s theme park. Iger also shared a greeting similar to the one Walt Disney said on opening day for the original Disneyland, in 1955: “To all who come to this happy place, welcome.”

The Grand Opening ceremony marked the moment with music, pageantry and a stream of Disney characters, from Mickey Mouse and Snow White to Baymax and Jack Sparrow, in front of the Enchanted Storybook Castle. A multi-generational choir performed a unique version of the Disney song, “When You Wish Upon a Star,” arranged in a Chinese style to reflect the balance of Disney magic and China’s cultural spirit at Shanghai Disney Resort. The ceremony also featured six performers holding enormous, brightly colored fans to represent the six lands of Shanghai Disneyland.

Tens of thousands of guests entered Shanghai Disneyland on its Grand Opening day to explore the attractions and live entertainment­. Thousands more visited the resort’s Wishing Star Park recreational area and Disneytown, a retail, dining and shopping district that is home to the Walt Disney Grand Theatre, where guests may experience the first Mandarin production of Disney’s musical hit THE LION KING.

The six themed lands of Shanghai Disneyland invite guests to step into new worlds of imagination and fantasy. Adventure Isle immerses guests in a newly discovered lost world. The Gardens of Imagination celebrates the wonders of nature and joy of imagination with whimsical décor and interactive spaces. Mickey Avenue is the first main entry at a Disney theme park that’s inspired by the colorful personalities of Mickey Mouse and his pals. Tomorrowland is a place of limitless possibilities, where the promise of looks brighter than ever. Treasure Cove is the first pirate-themed land in a Disney park, a place to join the adventures of Captain Jack Sparrow and Davy Jones. The largest of all the lands, Fantasyland, is inspired by Disney’s animated films and home to the majestic Enchanted Storybook Castle—the tallest, largest and most interactive Disney castle in the world. 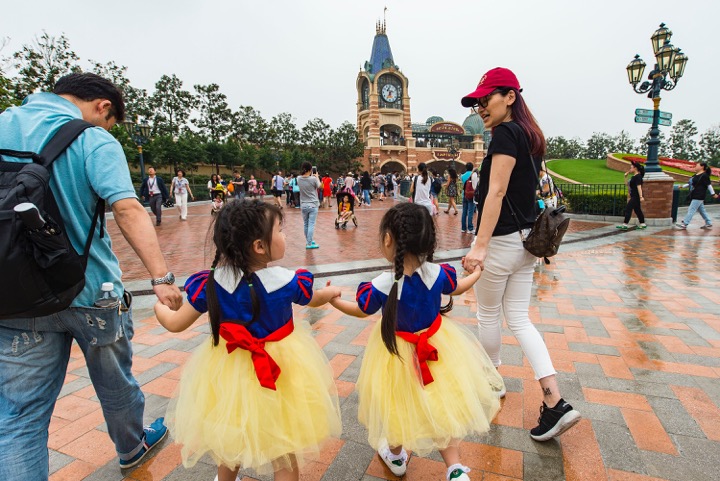 The Shanghai Disney Resort offers fun for guests of all ages.

Adjacent to the theme park is Disneytown, which features approximately 50 international shopping and dining locations in five unique areas. The World of Disney Store, the first in Asia, offers a collection of Disney merchandise, with products designed especially for Shanghai Disney Resort and the Grand Opening. The Walt Disney Grand Theatre, also in Disneytown, is now playing the Mandarin premiere of Disney’s hit musical, THE LION KING, a separately ticketed event.

Near the hotels and Disneytown is Wishing Star Park, which offers guests the opportunity to enjoy peaceful greenery, a 2.5 kilometer walking path and a glittering lake, with approximately 500,000 square meters open to the public.

Shanghai Disney Resort offers a distinctive Disney experience that reflects the identity of today’s China—from traditional regional dining cuisine and Chinese acrobatic performances, to the Shikumen architecture at Disneytown and Chinese Zodiac designs in Garden of the Twelve Friends.

Take a look at Mickey’s Storybook Express Parade and the TRON Lightcycle Power Run in our videos below: