Skyjump experience announced for Skyplex on International Drive in 2019 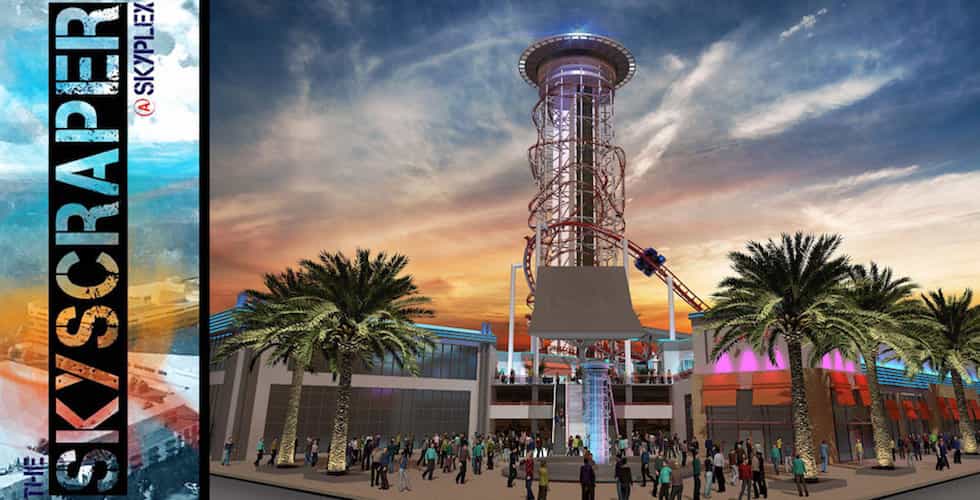 Skyplex promises to be the premier attraction complex for thrill seekers when it opens in a few years.

Thrill junkies and adrenaline-seekers rejoice: a new experience is coming to give you a rush unlike any other. Skyplex, an upcoming multi-million dollar entertainment complex, plans to bring “SkyJump,” a 500-foot free fall diving experience from the top of Skyscraper Tower, to their future location on International Drive by 2019.

The attraction is well known in the U.S. for being a Las Vegas staple at the Stratosphere. Skyplex recently secured the rights to the SkyJump attraction, and hopes to bring it to Orlando to satisfy amusement park guests seeking new kinds of excitement.

“The attractions for Skyplex are some of the most innovative in the world,” says Joshua Wallack, who with father and business partner David are developing of the Skyplex complex.  “The world’s tallest rollercoaster, the world’s tallest drop ride and now we’re launching an experience that feels like you are flying.  You will be one with the sky, and we envision this to be a major draw for tourists and convention delegates to the new I-Drive Entertainment District.”

In January, Skyplex had a 1.5 acre vacant site on Canada Avenue added to its zoning, in order to move forward in planning this colossal 595-foot tower and the “half billion dollar theme park complex,” according to Wallack.

Duke Energy has been in charge of preparing for Skyplex’s utility-related needs for the area during construction. “Infrastructure improvements, zoning changes to make vision and development more predictable, underground and modernized utilities and transportation improvements, such as the 4-way I-Drive Sand Lake Road Pedestrian Bridge, are the hallmark of the newly adopted I-Drive 2040 Overlay District,” said Wallack.

“Mayor Jacobs’ Vision for I-Drive will be a signature piece of her legacy and make this area boomtown for years to come from outside investors,” added Wallack. “We had to fight some tough battles in order to advance the future of prosperity and blue skies for all on I-Drive!”

Not only will guests drop to the ground 450 feet below them while experiencing SkyJump, but in the middle of the complex is the “Skyscraper,” which will be the tallest rollercoaster in the world. Though this doesn’t seem like the end of Skyplex’s new attractions, as Wallack says that the company has more surprises in store – “You don’t know the half of it.”

Here’s a look at the SkyJump in Las Vegas:

SkyJump off the Stratosphere in Las Vegas

Rumor says the project is “CANCELLED”. any confirmation?

Not that we have heard.

Close-up on the live-action films behind Adventureland...