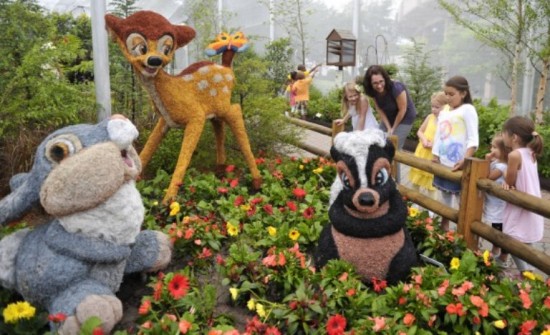 The 19th Epcot International Flower and Garden Festival will begin March 7 and end on May 20. This year’s floral icon will be an eight-foot-tall floral Sorcerer Mickey topiary. Above the park’s front-entrance topiary bed, the commanding Sorcerer Mickey will direct the manicured shapes of dancing broomsticks, buckets, mushrooms, hippos, alligators and elephants straight from the classic Disney film, “Fantasia.”

It takes more than one full year and 400 Walt Disney World horticulturists to plan and prepare for the 75-day festival. Thirty million blooms, 240 floating mini-gardens on two ponds, 700 container gardens of flowers, herbs, plants and vegetables, dozens of Disney character topiaries, 30 “flower towers” of impatiens and sweeping beds of floral designs will create a tapestry of brilliant color across the 260-acre Epcot landscape.

Bambi’s Butterfly House will be a-flutter with multiple species of butterflies at Imagination Walkway by Innoventions West.

Pixie Hollow Fairy Garden Disney fairy topiaries are inside a garden designed with play structures for children ages 2-5 at the Test Track Walkway.

The HGTV Designers Stage will present HGTV celebrities each Friday through Sunday and nationally recognized garden personalities Monday through Thursday at the Festival Center.

HGTV stars scheduled to appear this year include:

The Flower Power concert series will take place at the America Gardens Theatre on Friday, Saturday and Sunday and features both return artists as well as new acts.

The Festival Center will become an area for guest to shop for festival merchandise and get ideas and tips from master gardeners in Future World between Universe of Energy and Mission:SPACE.

• An Art in the Garden celebration of plein air artists is scheduled for March 23 to 25.

• A Florida Federation of Garden Clubs gathering will be April 27 to 29.

• Fresh from Florida Farmer’s Market salute is slated for May 4 to 6.

More information about the 19th annual Epcot International Flower & Garden Festival is available by calling 407-W-DISNEY (934-7639) or by visiting disneyworld.com/flower. The festival, including all gardening programs and exhibits, is included in regular Epcot admission.

Thanks for sharing information about 19th Epcot ……..