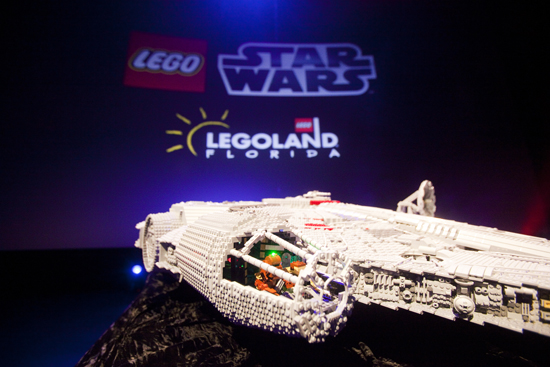 Legoland Florida has officially announced plans to bring the Force to Florida with a new expansion to the park, a Star Wars Miniland Cluster. The new Miniland area will feature more than 2,000 Lego models with some being more than six-feet-tall with interactive buttons allowing children to activate movement throughout the scenes.

The Star Wars Miniland is joining the seven other interactive areas in the park’s Miniland USA, a walk-through attraction using Lego bricks to recreate famous American cities such as Washington D.C., New York and various Florida scenes. It will follow the chronological path through the Star Wars timeline and feature 1.5 million Lego bricks creating scenes and characters from the iconic movie series as well as “The Clone Wars” TV series. Star Wars Miniland is scheduled to open this November. (UPDATE: It will officially open to guests on Nov. 9, 2012.)

“Today, less than a year after our grand opening and only four months after the opening of the all-new water park, we are thrilled to announce yet another expansion this November. This new Lego Star Wars Miniland Cluster will add to our 150-acre family theme park with more than 50 rides, shows and interactive attractions,” said Adrian.

Here is a look at the Star Wars area of Miniland currently open at Legoland California:

News In The Queue Sept. 6, 2012: Enchanted Tales with Belle, Howl-O-Scream, and more

The Attractions Show – Marvel Day at...