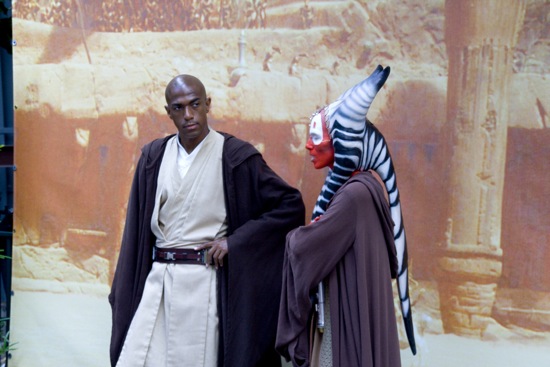 The Star Wars adventures continue on Aug. 15 with the theatrical release of Star Wars: The Clone Wars from Lucasfilm Animation, and this year’s Star Wars Weekends at Disney’s Hollywood Studios will offer fans an in-depth look at the making of this big-screen animated movie.

Among the features at this year’s Star Wars Weekends, which run every Friday, Saturday and Sunday from June 6 to June 29, will be “Behind the Force – Experience The Clone Wars,” an exploration of the creation of this new Star Wars feature film. Fans will get a chance to meet a representative of Lucasfilm and, at the culmination of the presentation, see an exclusive clip that can be seen only during Star Wars Weekends.

“The Clone Wars is Star Wars as you’ve never seen it before, so it makes sense that we’re offering fans at Star Wars Weekends something completely unique – an early glimpse at a Star Wars movie,” said Kayleen Walters, director of marketing for Lucasfilm.

In addition Star Wars Weekends will feature celebrities from the classic, live-action movies, who will be on hand each weekend for photos, Q&A, autograph sessions and motorcades. All four weekends, Star Wars actor Warwick Davis (“Wicket” the Ewok) will serve as celebrity emcee and host of the event.

Among the scheduled celebrities and special guests at this year’s Star Wars Weekends are Dave Filoni, director of Star Wars: The Clone Wars; and Matthew Wood, who performs voices in the movie and the Clone Wars television series debuting this fall.

Other activities include:
The “Padawan Mind Challenge,” allowing kids under 12 to test their wits before the Jedi Council.
“Legends of the Force,” a motorcade featuring Star Wars celebrities.
“Jedi Training Academy,” where young Jedi-wannabes can learn lightsaber battle techniques and test their skills against Darth Vader or Darth Maul.

In addition, Lucasfilm and Disney are promising a “host of surprises” throughout the four weekends, promising to bring an unprecedented level of “sneak preview” excitement and fun to Star Wars Weekends.

A look at Prince Caspian at Hollywood Studios