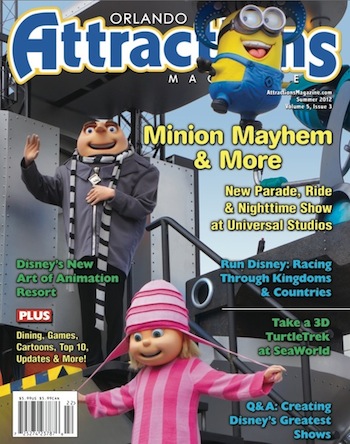 The Summer 2012 issue of Orlando Attractions Magazine is now available to order in print and in the free iPhone and iPad app.

This issue features Gru, Edith and a Minion from the Despicable Me on the cover. You’ll read about how they’re a part of a new parade, a new nighttime show and in their own new ride at Universal Orlando. Our other big story is a feature on the Walt Disney World Marathon and other Disney races.

Plus you’ll find much more from all your favorite attractions.

Plus:
• Feedback – We love hearing from you!
• Vacation Planner – Calendar of Orlando-area events.
• Work In Progress – Information & photos from what’s in the works.
• Versus – We put attractions head-to-head.
• Photo Finds – Photo spread featuring Orlando’s latest and greatest.
• Bemusement Park – Our original comic & games.
• Out of the Loop – Find out what’s happening in theme parks outside of Orlando.

The Summer issue and all back issues are also available in our iPhone and iPod applications. Click Here to download the free app.

Look for the issue at Barnes & Noble and Books-A-Million stores nationwide in late June/July. Print subscribers should receive their copy before July 11.

Photo Finds: A look at smaller additions to the Disney parks and Legoland Water Park – June 11, 2012

“Look for the issue at Barnes & Noble and Books-A-Million stores nationwide in April.” ??? Do you mean July?

waiting for the summer issue of Orlando Attractions Magazine

Attractions Magazine commercial, as seen on the...