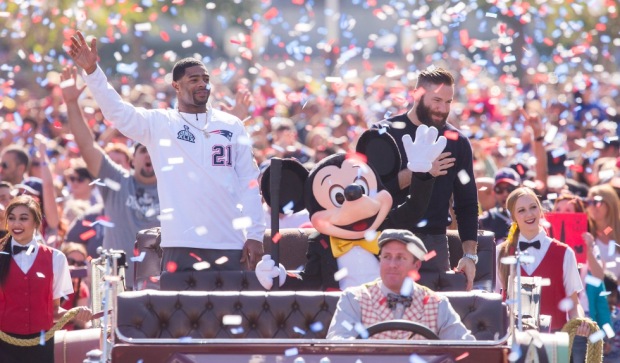 Just hours after their title victory against the Seattle Seahawks, Edelman and Butler each were showing their Disney Side, riding in an open-air jalopy, smiling and waving to guests at the Happiest Place on Earth. The celebration was held at Disneyland this year instead of Walt Disney World, most likely in honor of Disneyland’s 60th anniversary this year and Disneyland was closer to this year’s host state of Arizona.

The Disneyland Band, Mickey Mouse and a whirlwind of confetti accompanied Edelman and Butler down Main Street. It was a dream come true for wide receiver Edelman and rookie cornerback Butler, who led the Patriots to a 28-24 victory over the Seahawks.

Edelman and Butler each contributed huge plays for the Patriots in the final minutes of the game, giving New England its fourth Lombardi Trophy. Edelman caught a three-yard touchdown pass with 2:02 left in the game to give the Patriots the lead. Then, with 20 seconds to play and the Seahawks on the verge of scoring, cornerback Butler intercepted a pass on the goal line to seal the victory.

In the moments following their team’s feat of capturing the National Football League championship Sunday, Edelman and Butler stood in front of a TV camera and shouted four words that have become an iconic reaction to milestone achievement: “We’re going to Disneyland!” They also shouted “We’re going to Disney World” for a separate commercial. Each year both phrases are recorded to air on in different markets and the visiting player or players usually visit both Disneyland and Disney World at some point during the following months.

See their Disneyland celebration in our video below:

Fantasy of Flight back open with a smaller museum