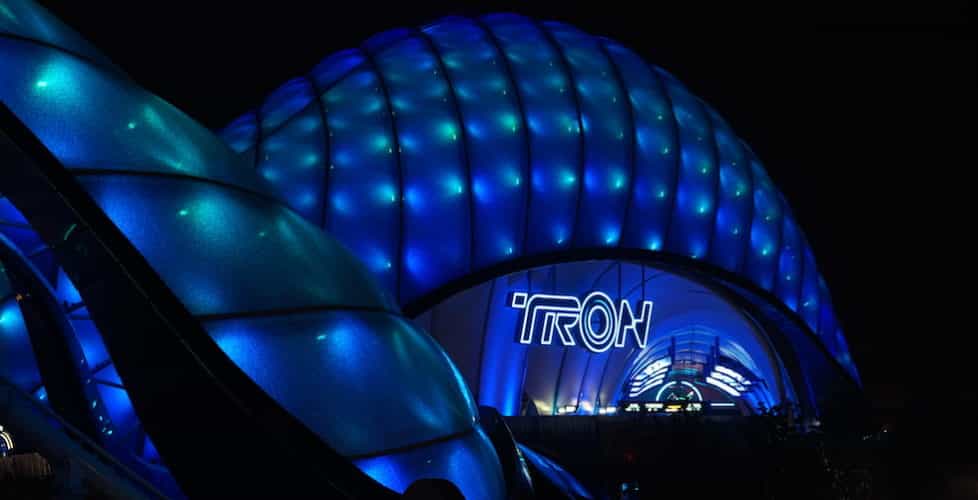 Could a Tron attraction be headed to Epcot at Walt Disney World?

Could the end be near for the Universe of Energy attraction at Epcot? And if so, would the Tron franchise be a good fit?

On May 20, the WDW News Today fan website revealed they found permits filed by the Walt Disney Company to reroute a drainage canal behind the Universe of Energy Pavilion. Essentially, it’s to create the necessary space in addition to the Universe of Energy show building for a new attraction. Creating an attraction is anything but simple and requires an inordinate amount of prep work before construction is visible from a guest’s perspective. This marks the beginning of the end for Universe of Energy as we presently know it.

Looking at the boundaries, this a great deal of space for whatever the replacement may be coming. Rumors have been circulating that Marvel’s Guardians of the Galaxy would be constructed in this space. A source previously revealed to me that Imagineering have indeed been tinkering with Guardians of the Galaxy and Universe of Energy was one of the few spaces explored. This isn’t a deviation from the norm as the “blue sky” phase is a chance for the creative teams to try different concepts and mull over their options. Every decision made is calculated, especially when it means replacing an existing attraction.

So Universe of Energy isn’t the only potential space for a Guardians of the Galaxy attraction, and yet my first instinct upon seeing these permits was this meant that the Guardians were indeed landing in Epcot. Another source, however, contacted me and related this might not be the case. According to this source, Tron Lightcycle Power Run is rumored to replace Universe of Energy and it’ll be modeled after the existing attraction in Shanghai Disney Resort. This includes the ride’s iconic exterior, as well as the beyond cool outdoor coaster section. A few different websites reported the rumors that Tron would replace Tomorrowland Speedway at the Magic Kingdom, which would make sense. Placing a Tron attraction next to Test Track raises questions. There are similarities between the two in terms of structure, as well as aesthetic with the current version. What does this mean for Test Track? For now, nothing. Perhaps the attraction may see changes in the indeterminate future.

Would a Guardians of the Galaxy attraction conflict with Disney and Universal’s agreement for Marvel Super Hero Island? For this column, I revisited the contract originally signed between Marvel and NBCUniversal (then MCA Records), as well as this write-up on it by the Orlando United fan website. I also reached out to our writer Seth Kubersky for his thoughts. The consensus is that an attraction featuring the Guardians of the Galaxy is permissible so long as Walt Disney World follows stipulations in the contract. The “Marvel” brand name can’t be associated with the ride and it can’t feature any of the characters being used by Universal Orlando Resort. There are also marketing restrictions. We aren’t lawyers and we aren’t privy to all of the internal operations of Disney, Universal or Marvel, but it would seem a Guardians of the Galaxy attraction at Walt Disney World is feasible. I welcome you to offer your thoughts in the comments section of this column.

Having seen point-of-view videos of the Tron coaster in Shanghai, it’s exciting to learn we may get a chance to experience this attraction. The ride looks spectacular and would be a nice addition to Walt Disney World Resort no matter if it ends up in the Magic Kingdom or Epcot. It should be noted that a new film project said to be a “reboot” of the Tron film series is in the works at Disney, which would put the property back in the spotlight if it materializes. Walt Disney World won’t be the only place for guests to experience this ride. The Tron coaster is also rumored for Disneyland Resort either in Disney California Adventure in the rumored Marvel expansion space near Guardians of the Galaxy — Mission: Breakout or in Tomorrowland where Star Wars Launch Bay currently resides. My guess is that it’ll likely be placed in Tomorrowland, as Imagineering are rumored to be saving the surrounding area around Mission: Breakout! for a future Marvel expansion.

I suspect we’ll learn more about the rumored Tron attraction on the East and West Coasts in the comings months, perhaps during D23 Expo in July of 2017? Until then, I’ll continue to look at pictures and videos of the attraction in Shanghai with envy.

Stitch’s Great Escape reopens for the summer at Magic Kingdom

The rumor is interesting, especially considering the energy pavilion has remained relatively unchanged for so long.

Still, I was kind of hoping Epcot would avoid the trend of every new attraction or land needing to be based on some IP.

To me, Tron seems a good fit in Tomorrowland while an original GotG ride goes well in DHS, just preferably not at expense of Tower of Terror.

Hope it’s true. The Ellen ride is terrible since they got rid of the original ride. The Tron ride is perfect for EPCOT. It fits that park like a glove.

Cook with a Disney Chef during #DisneyMagicMoments:...