Theater Review: A musical made for artists … ‘An American in Paris’

“An American in Paris” Touring Company. Photo by Matthew Murphy.

“An American in Paris” is a graceful musical filled with art, ballet and romance. The story is a bit cliché, but it’s otherwise a beautiful production.

The setting is Paris, 1945, at the end of the Second World War. American soldiers are headed home, except for Jerry Mulligan (Garen Scribner), who, by walking around Paris for a few hours, has decided to stay in France to pursue a life as an artist. He goes to a cafe and by chance meets a fellow ex-soldier named Adam (Etai Benson), and a Frenchman whose family owns the cafe, Henri (Nick Spangler). They quickly become friends and through a series of circumstances involving a job working on a new ballet, all fall for the same girl. The girl, Lise (Sara Esty), is to be the star of a new ballet which Adam is writing, Jerry is designing and Henri’s parents are funding, alongside another contributor, Ms. Davenport (Emily Ferranti). Throughout the production, the love triangle gets more and more complicated and culminates in the final product of the ballet and Lise’s final choice. 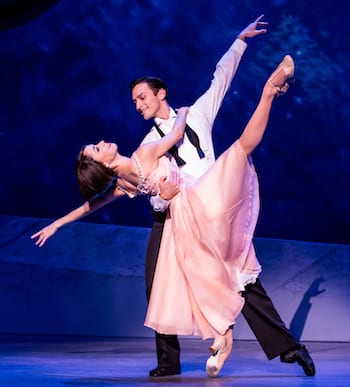 Sara Esty and Garen Scribner in “An American in Paris”. Photo by Matthew Murphy.

I loved the set design. With the use of projection and set pieces, along with the gracefulness of the dancing, everything seemed to transition smoothly with very few abrupt changes in setting. Much of the more literal sets also had elements to them which transitioned into geometric forms which suggested we were no longer watching real people, but a more dream-like painting come to life. If you’re someone who doesn’t like much dancing or would rather be shown things more literally – in other words, a more straightforward storyline and approach – this definitely isn’t the production for you.

Personally I thought the story wasn’t the best, since it seemed to follow the cliché love triangle trope, but everything else about this show was breathtaking to watch and hear. Art lovers everywhere will fall in love with the music and visuals, I know I was mesmerized.

“An American in Paris” is now playing at the Dr. Phillips Center for the Performing Arts in downtown Orlando through Dec. 18. For more information and tickets, visit drphillipscenter.org.

I liked it. However,
I felt it was about 10 or 15 minutes too long. Also some of the humor seemed to play better to the people in the front rows; who could see facial expressions.

Step into a terrifying theatrical tale with...