Theater Review: Like the D’Ysquiths, ‘Gentleman’s Guide’ audience was dying (of laughter) 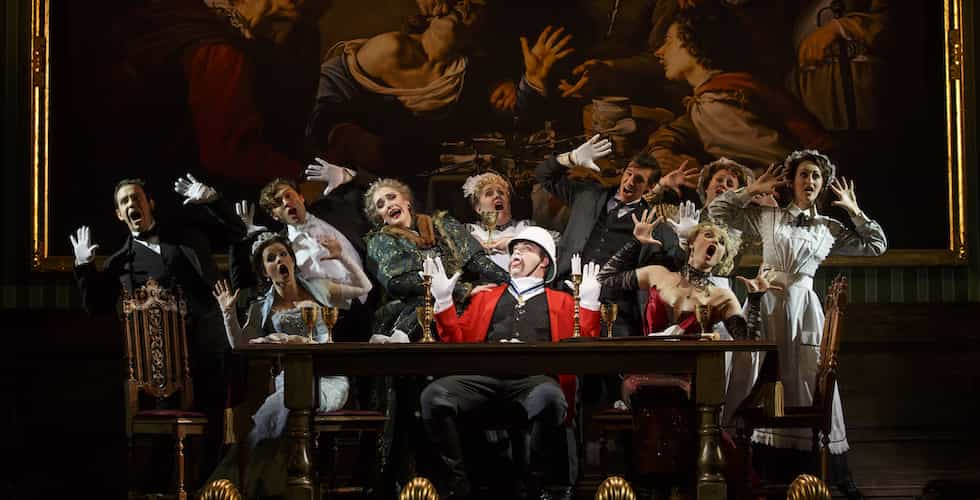 “A Gentleman’s Guide to Love and Murder” is a witty musical comedy about a series of killings, leading one man up the social ladder.

When Monty Navarro’s (Kevin Massey) mother dies, he finds out that since she married for love instead of profit, she was disinherited by her family, who happens to be the richest family in London, the D’Ysquiths. He also finds out that since he’s his mother’s son, he’s technically eighth in line to become a duke and inherit the family’s massive fortune.

Unfortunately his D’Ysquith family wants nothing to do with him and refuses to let him into the family’s business at all. And what’s worse, to Monty at least, his rich lover Sibella Hallward (Kristen Beth Williams) cannot marry him because of his social status. While trying to plead with one of the D’Ysquiths, Reverend Lord Ezekial D’Ysquith (John Rapson) to put in a good word for him, he happens upon an interesting situation which could be potentially fatal for the reverend. Wouldn’t it be a shame if the pompous D’Ysquiths just happened into fatal situations like this, one after another? It seems there’s a curse on the D’Ysquith family name, and its name is Monty Navarro.

The music was great and really brought me into 1900s London. It was very classy, even if it is mostly about a serial killer, and of course love. I wouldn’t recommend it for children, as the plot isn’t really inspiring or a great message, and there were quite a few sexual references and innuendos. But it’s a great comedy for a date night or night out with friends.

“A Gentleman’s Guide to Love and Murder” is playing at the Dr. Phillips Center for the Performing Arts through Feb. 12, 2017.

The next season of shows at the Center was also recently announced, click here for more info.

Broadway in Orlando returns this year at Dr....

‘Harry Potter and the Cursed Child’ returning to...

‘Hamilton’ stars to perform at Give Kids the...

Theater Review: ‘Something Rotten!’ is for musical...