Theater Review: ‘Matilda’ will grab you by the pigtails and swing into your heart 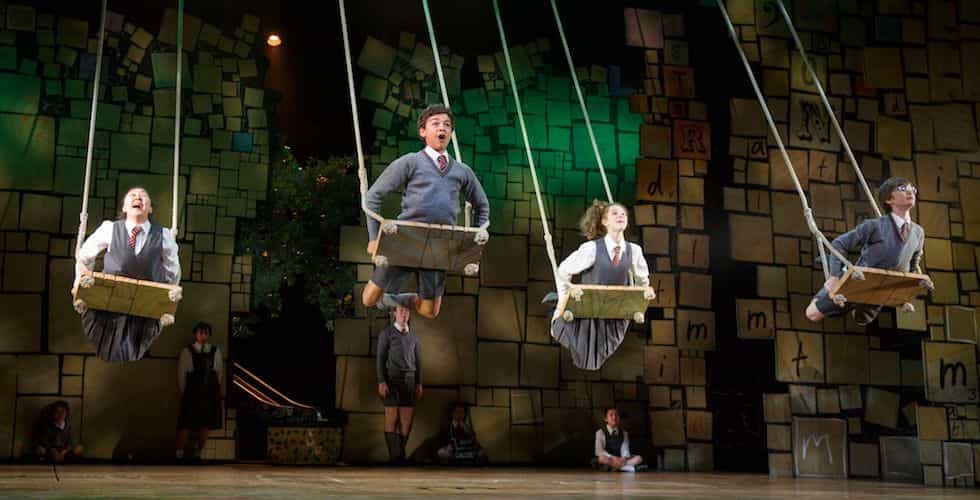 A great production for the whole family, “Roald Dahl’s Matilda the Musical” is a tale about a special little girl named Matilda whose parents would prefer her to be anything but.

Mr. and Mrs. Wormwood (Matt Harrington and Darcy Stewart) live a fairly average life, with jobs as a competitive dancer and a used car salesman. They spend their days working and their nights watching the telly (television) with their son Michael (Darren Burkett). But one day Mrs. Wormwood discovers that she’s nine months pregnant, and they end up with an unwanted “lousy little worm” they name Matilda (Gabrielle Gutierrez, Jamie Maclean or Jenna Weir). Flash forward five years to a time when, the now slightly older Matilda is bullied mercilessly by her parents. The only place she can escape is to the library, where she reads books like “Romeo and Juliet”, “War and Peace”, and other books an average 5-year-old certainly can’t: and she tells stories to the librarian, Mrs. Phelps (Keisha T. Fraser), who eats every little detail up.

Once Matilda begins school, she meets her new teacher, Miss Honey (Jennifer Bowles), whom is the sole light in the dreary dark place that is Crunchem Hall Elementary School. Miss Agatha Trunchbull (Dan Chameroy), the children-hating headmistress, only wants to break the children and force them to bend to her will by cramming them into a narrow cupboard called the Chokey. Though Matilda is little, she realizes she can do a lot, and stands up for what she believes in and fight back.

As a kid, I never read the original Roald Dahl book or saw the movie, so this was a completely new story to me. I wish I had seen it when I was younger, since a large part of the plot is centered on growing up. In fact, the cast of kids completely blew me away, and almost even make me feel inadequate for not accomplishing more earlier in life; They travel the world flawlessly executing their songs, dance moves and blocking, all while doing their schoolwork. The children in the cast are phenomenal.

The story and music of Matilda are great. Most of the songs are super catchy and will get stuck in your head. The set of the show mostly consists of cubes resembling Scrabble pieces, symbolizing Matilda’s love for reading. Before the show began, my party was having fun seeing how many words we could find hidden in the jumbled archway.

The show is playing at Dr. Phillips Center for the Performing Arts through May 14, and is currently traveling the country. To buy tickets visit drphillipscenter.org.

Wishes fireworks come to an end at Magic Kingdom