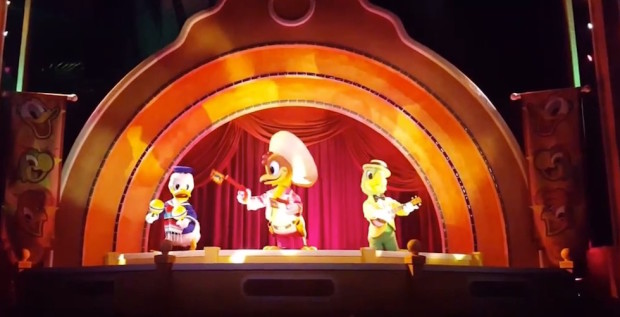 When this version of the Gran Fiesta Tour opened in 2007, the final scene featured a screen with animation of the Three Caballeros performing together. On Dec. 4, 2015, it was replaced with three audio-animatronics that have a long history of appearances.

The Panchito, José Carioca, and Donald Duck figures debuted in the Mickey Mouse Revue attraction at Magic Kingdom when Walt Disney World first opened on Oct. 1, 1971. After the show closed in 1980, the figures moved to Tokyo Disneyland in 1983 to perform in the same show for that park, which then closed its doors in 2009. Their next appearance would be at the D23 Destination D: Walt Disney World 40th event in 2011 in a special exhibit curated by the Walt Disney Archives.

Now the three figures have found a new home inside the Mexico Pavillion’s main ride in the World Showcase at Epcot. To commemorate this, the Disney Store has released a special T-shirt featuring The Three Caballeros and the Gran Fiesta Tour. You can only purchase the shirt from Dec. 4 through 10 on the Disney Store website.

Special thanks to @Crushinat0r on Twitter for the video.