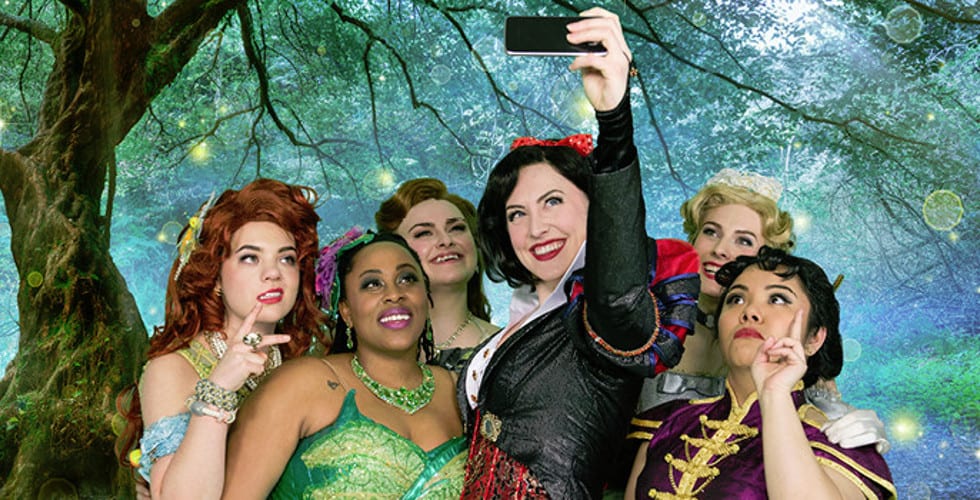 The hit princess parody Disenchanted! is coming back to Orlando in April 2017.

They’ve gone from the Orlando Fringe to Off-Broadway, and in 2017 some suspiciously familiar fairytale princesses are coming back to satirize their storybooks when the hit musical comedy Disenchanted! returns to Orlando’s Plaza Live on April 11-20.

Poisoned apples. Glass slippers. Who needs ’em?! Not Snow White and her posse of disenchanted princesses in the hilarious hit musical that’s anything but Grimm. Forget the princesses you think you know – the original storybook heroines have come back to life to set the record straight. After multiple sold-out runs in the USA, these royal renegades tossed off their tiaras to bring their hilariously subversive, not-for-the-kiddies musical to you – and what you thought about princesses will never be the same!

The idea for Disenchanted! was conceived by Dennis T. Giacino, a former history teacher. When teaching his class about the colonial settlement at Jamestown, Virginia, he couldn’t help but wonder: What would the ‘real’ Pocahontas – a circa 1616, rough-and-tumble 10-year-old Powhatan girl – think of the fringed deer-pelt miniskirt and long, flowing hair donned by her 20-year-old counterpart in her 1995 movie comeback? A musician at heart, Giacino penned a musical number skewering the ‘princess pop culture’ that transformed Pocahontas from a revered Native American heroine into a pin-up vixen of the silver screen. Soon, Giacino found himself discovering a number of other princesses who had a bone to pick with the way they have been portrayed, and Disenchanted! was born! 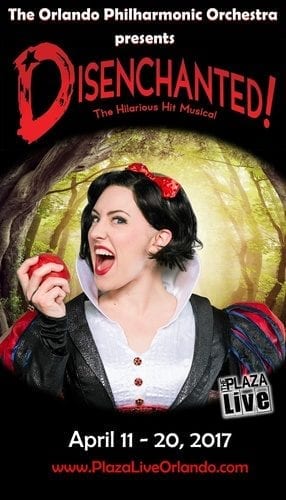 The ‘storybook’ journey for Disenchanted! began with a sold-out, award-winning run at Orlando’s International Fringe Festival in 2011 (‘Best of Fest’ – Orlando Sentinel), and subsequent licensing of over a dozen productions in the US, from New Jersey to California, all of which have been met with widespread critical acclaim. It returns to Orlando as part of a record-breaking North American tour.

During the New York engagement, the production defied the trend for Off-Broadway shows with its sold out performances and critical acclaim. NBC New York called the show “funny, irreverent, and great fun! The seriously talented cast of six strong, hysterical women give fairytales a new meaning!” while Time Out New York stated, “If you love fairy tales with a sassy modern twist, relief is here! The not-for-children musical revue DISENCHANTED! gives a saucy makeover to Snow White, Sleeping Beauty and other fairy-tale princesses.” The Huffington Post calls it, “funny and a touch wicked. Disenchanted!’s pop score delivers to great comic effect.” The New York Times describes Disenchanted! as “a girls’-night-out rebellion” and FOX 5 says “It’s a hot ticket that delivers a new kind of fairy tale.

You will laugh and then laugh some more at the sassy, irreverent humor.” Broadway Box raves, “Think ‘Bridesmaids’ for Disney Princesses! This sidesplitting adult parody of the Disney princess posse and its mega-talented cast will make you blush and feel nostalgia all at once. Who could ask for anything more?”

TICKET INFORMATION
Individual tickets for Disenchanted! at The Plaza Live are now on sale, and range from $35.00 – $85.00. Tickets are available online at plazaliveorlando.org or by phone at 877-987-6487.

‘Cats the Musical’ is a purrfect evening...

Could Disney’s ‘Hercules’ be headed to the...