We took a cruise leaving from Copenhagen, Denmark in April, so we arrived a few days early to explore the city. My favorite part of the visit was Tivoli theme park. I’m not sure if it was just the time of year that the gardens were in bloom, but it was one of the most beautiful theme parks I’ve visited. Here’s a look at our day. 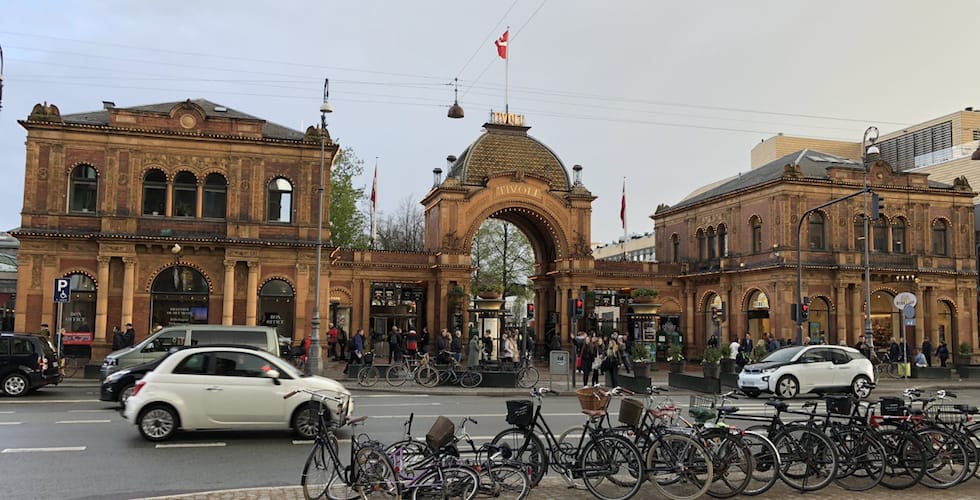 The entrance to Tivoli. It sits right in the middle of the city. 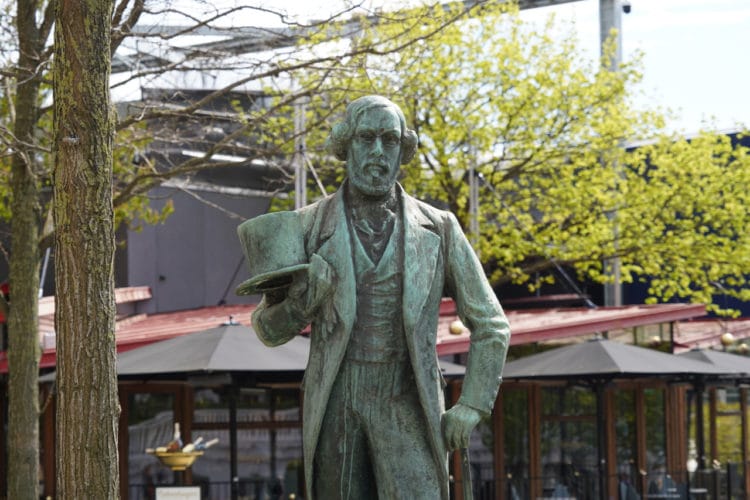 Tivoli is not only one of the prettiest parks, it’s also one of the oldest. The park was first opened by Georg Carstensen in 1843. The story says he founded it as Tivoli Gardens after visiting another Tivoli in Italy. It was fitting that he took the name from someone else, as Walt Disney took some ideas for Disneyland when he visited Tivoli in the early ’50s. Early this year, Walt Disney World Resort contributed designs for a custom float to Tivoli’s 175-year Jubilee Parade, currently running. But unfortunately for us, it started just after we visited. 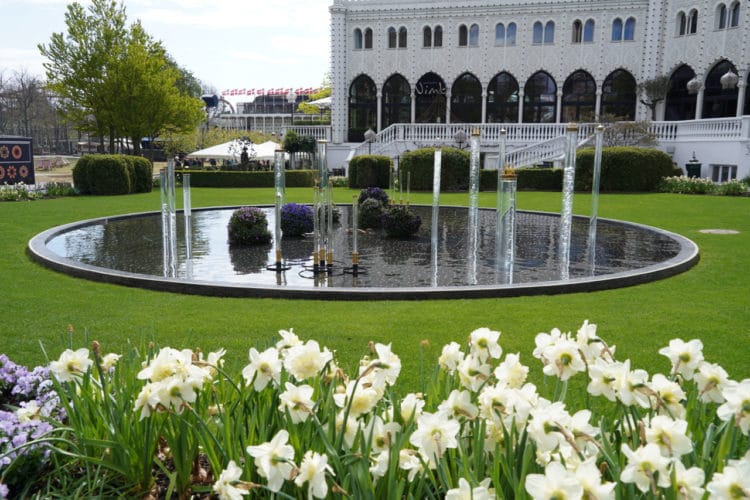 This garden near the front of the park features bubble tube fountains. It was remarkable and reminded me of the beauty of Cypress Gardens in its heyday. 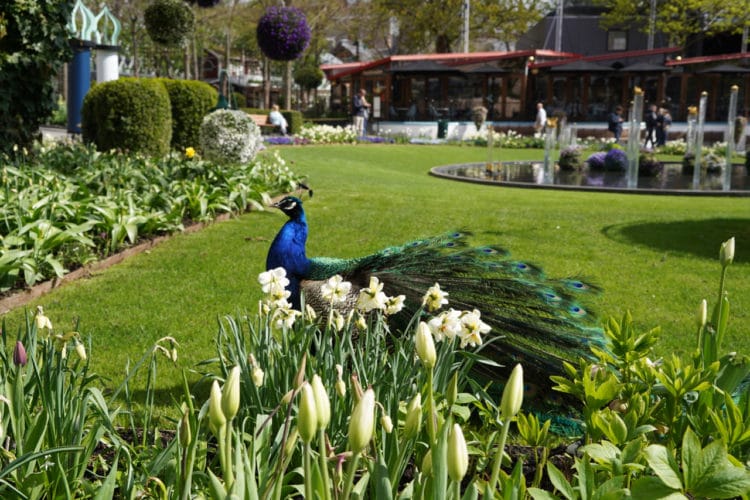 One of many free-roaming peacocks we spotted near the bubble fountains. 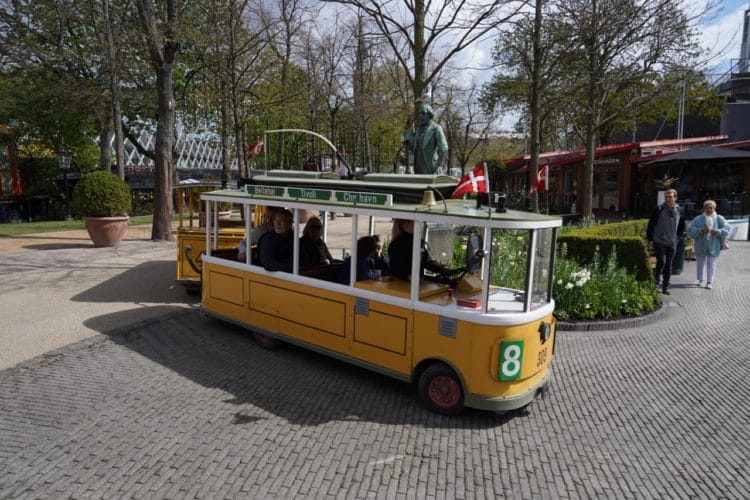 A small trolly takes park guests for a ride. 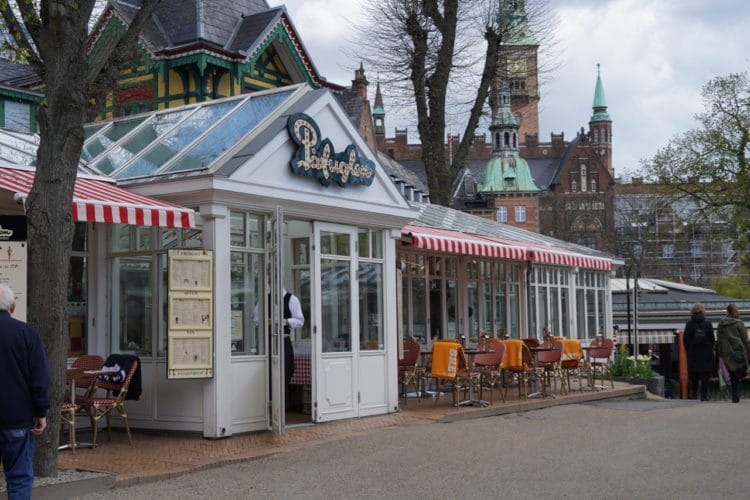 This park has more restaurants than I’ve ever seen at a theme park. This is just one of more than 40 places to dine. Most are just as stunning as this one. The large buildings you see in the background are in the city, outside the borders of the park. 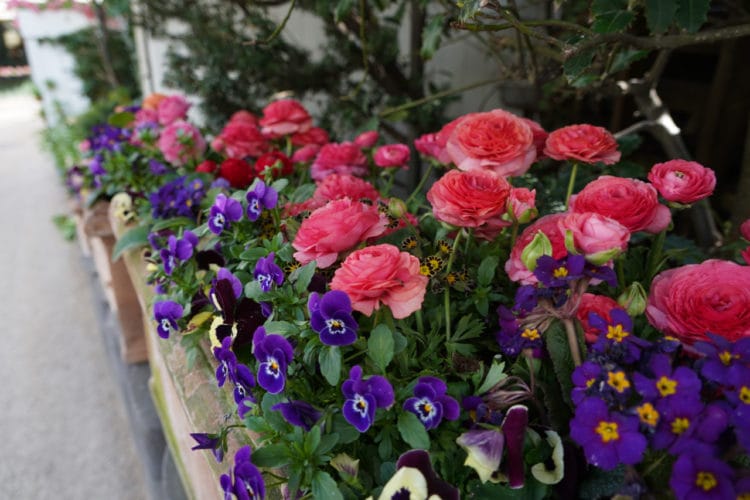 Everywhere we looked, there were beautiful gardens and flowers. 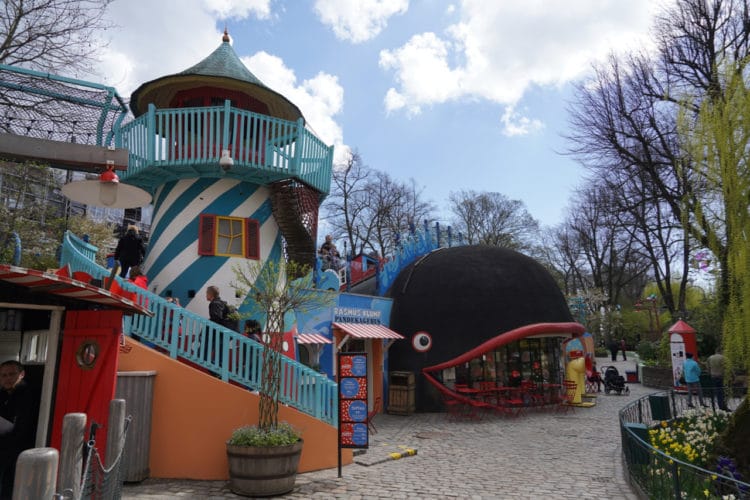 This is the little kids area of the park called Rasmus Klump World. We aren’t sure if this area was here when Walt Disney visited, but that large whale looks familiar. Inside is a restaurant where you can get fresh crepes. 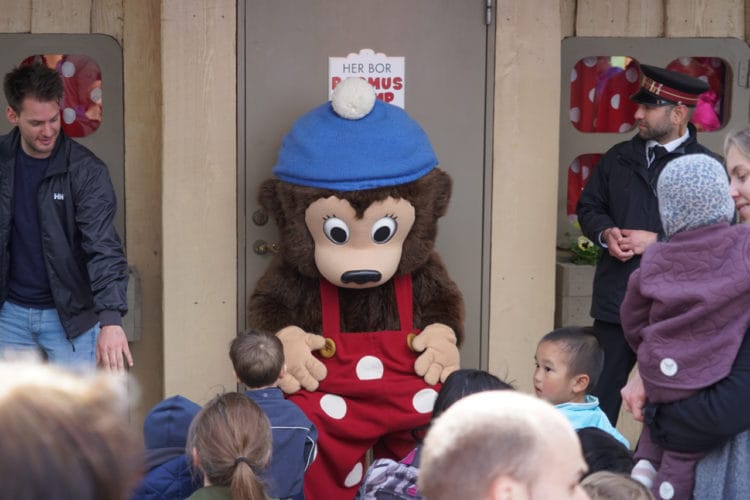 Here is Rasmus Klump himself, meeting kids in the park. He was quite popular. Rasmus Klump is a Danish comic strip series created in 1951. 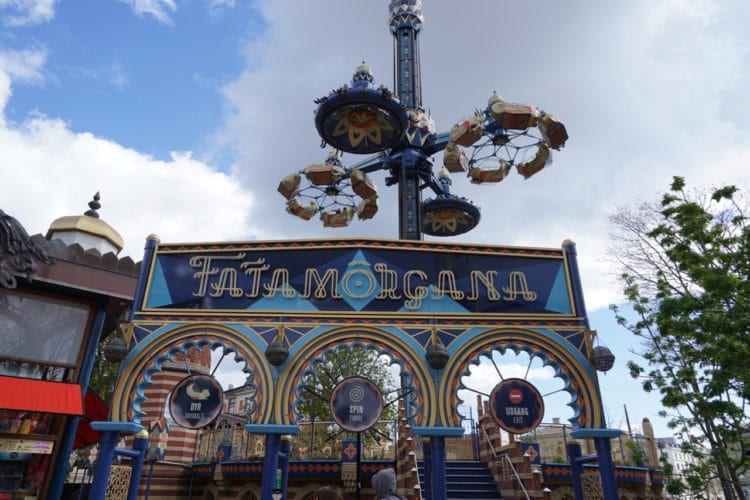 Now we have made it around towards the back of the park where most of the typical theme park rides are. This one is called Fatamorgana. It’s a spinning ride, but you can chose to sit inside or facing outside with your legs hanging down.

Near this ride is a drop tower ride which gives you a great overview of the city and park. It’s called The Golden Tower: 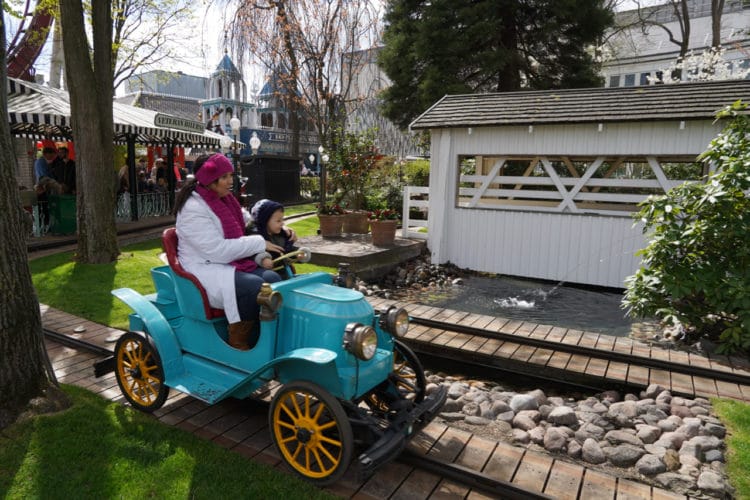 A cute ride for parents and kids called The Vintage Cars. 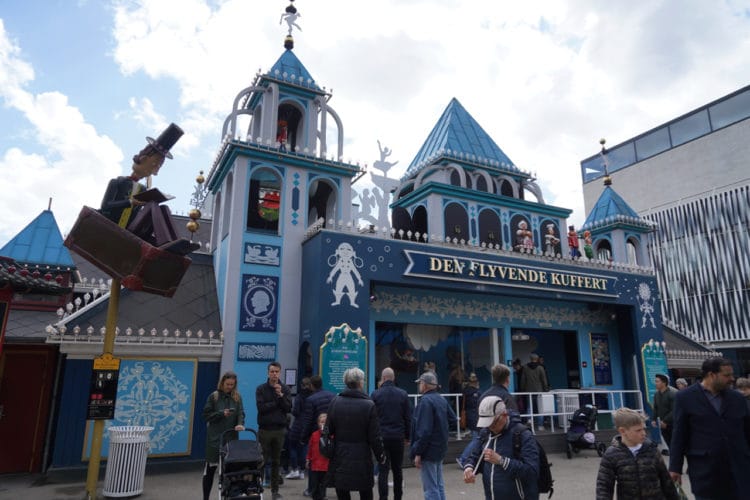 This is one of two dark rides in Tivoli. The English name for it is The Flying Trunk. (Most Tivoli rides start with “The”.) From the outside it may remind you of It’s a Small World. (Again, I’m not sure if this was here when Walt visited.) It tells the stories of Hans Christian Andersen, who lived in Copenhagen. You can chose to ride in English or Danish. Here’s our video ride-through.

And here’s the other dark ride called The Mine. It’s a shooting ride: 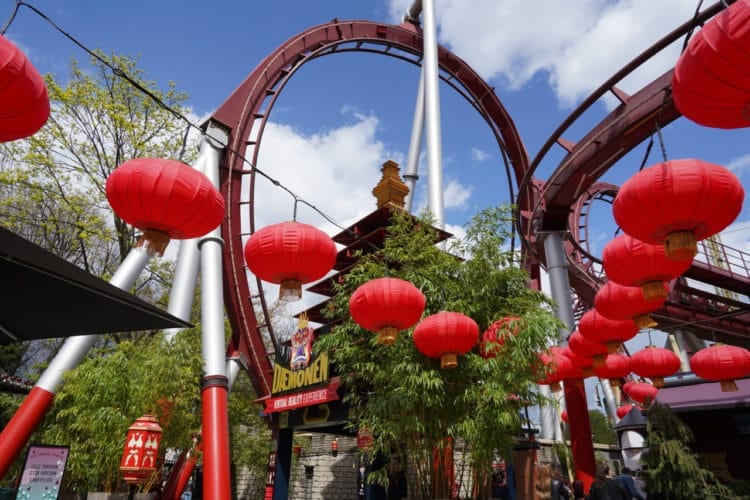 This is The Demon roller coaster in an Asian-themed area of the park. Guests have the option of riding it with or without a virtual reality headset. We recommend riding it each way, although I preferred without. 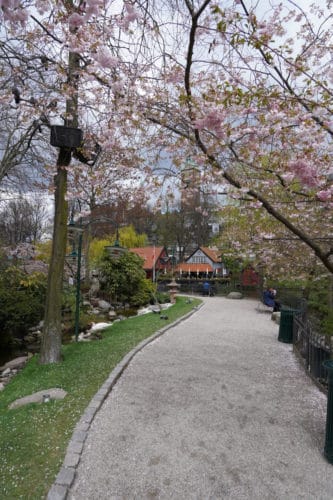 Just another beautiful path you can take in Tivoli’s gardens. 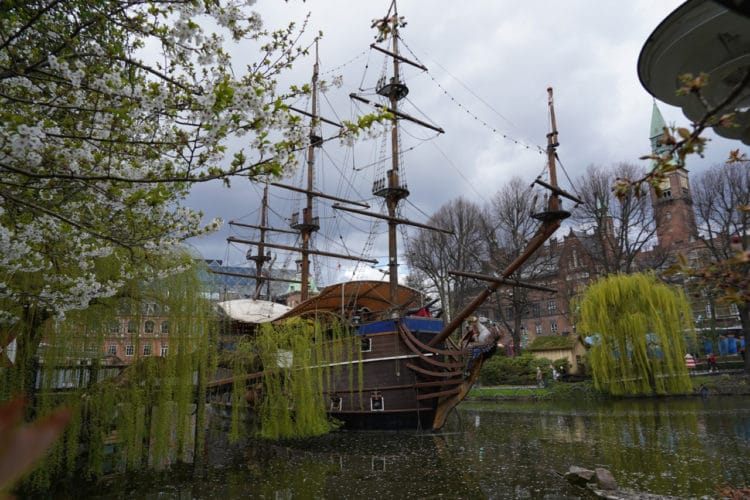 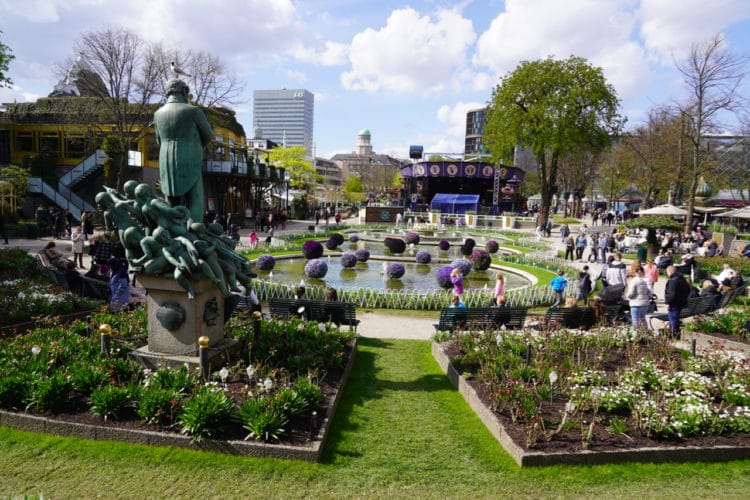 I know I keep saying how beautiful it is, but look! On the far end is a stage where many concerts are held throughout the year. With concerts, other entertainment and so many restaurants, many locals buy season passes. Day guests pay about $15 U.S. to enter the park, then about $35 for a wristband to be able to ride the attractions. Thanks to Tivoli for providing us entrance and wristbands. 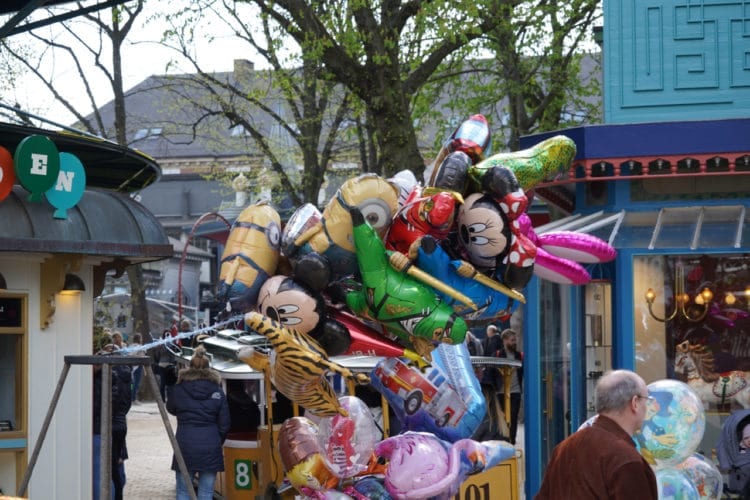 I found this bundle of balloons interesting. You can see Mickey and Minnie Mouse balloons being sold alongside Minions and other characters. 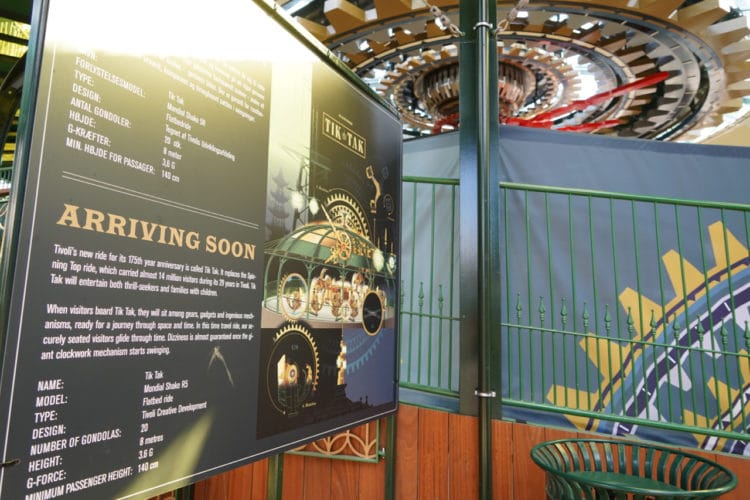 This new ride wasn’t yet open when we were there. It looks like a spinning ride similar to Mad Tea Party, but themed to a clock designed by Tivoli Creative Department. 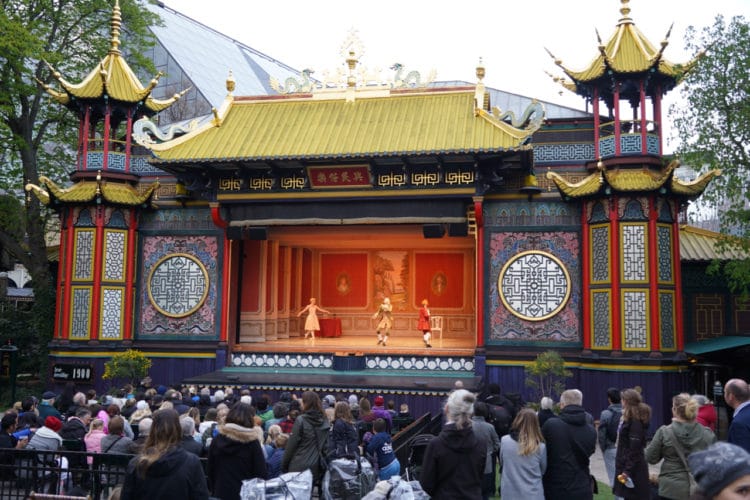 This is The Pantomime Theatre, home to the Tivoli Ballet Theatre. There are performances here multiple times daily. 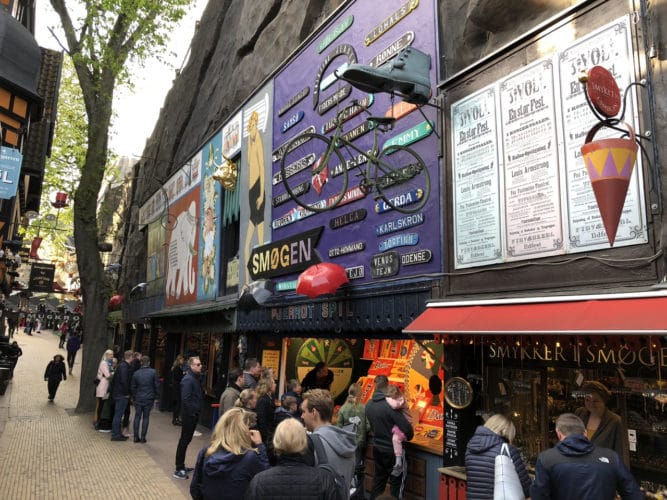 This alleyway area has a lot to look at. Among the shops, games and restaurants, is The Fun House. Take a look: 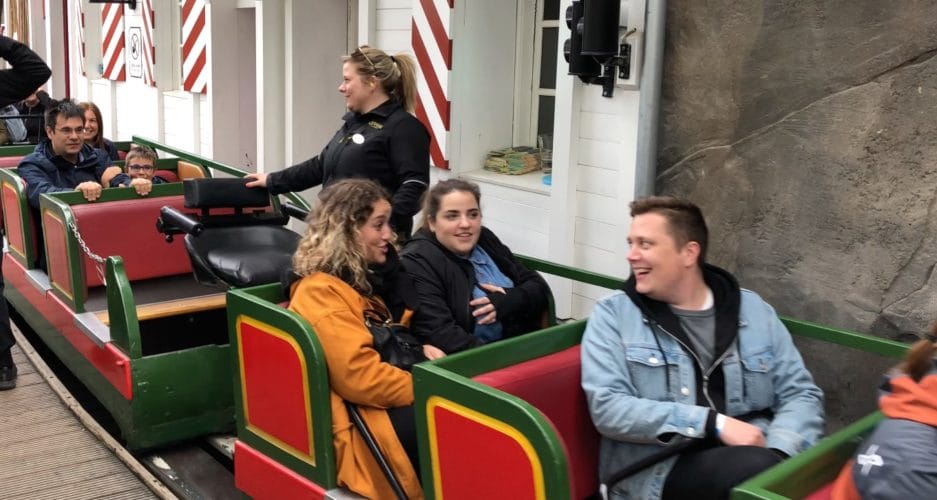 Also near The Fun House is one of the world’s oldest roller coasters. Simply called The Roller Coaster, it features an employee who sits in the middle of the coaster and pulls the brakes when needed (pictured in black). Here’s a video: 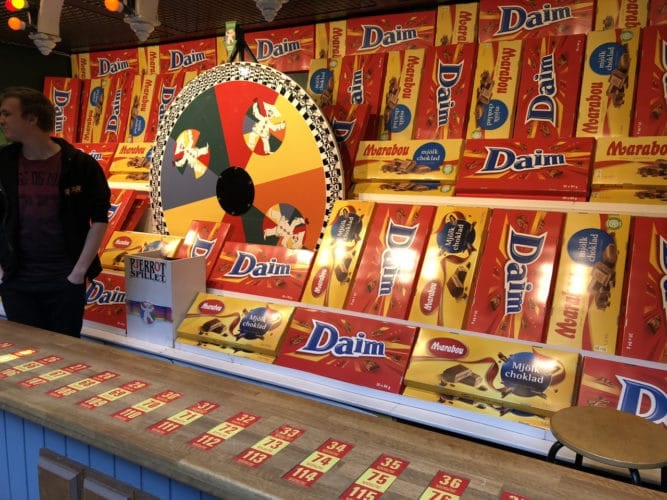 Many of the games of skill at Tivoli are very highly themed. As we were walking around the park, we kept seeing people carrying huge candy bars. It turns out they were winning them here. 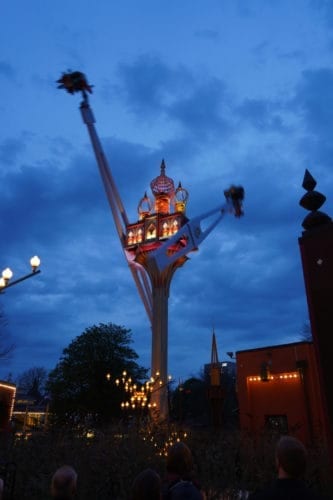 This ride is appropriately named Vertigo. Guests ride in an airplane and spin around in a huge circle while also being able to spin sideways. We didn’t ride it. 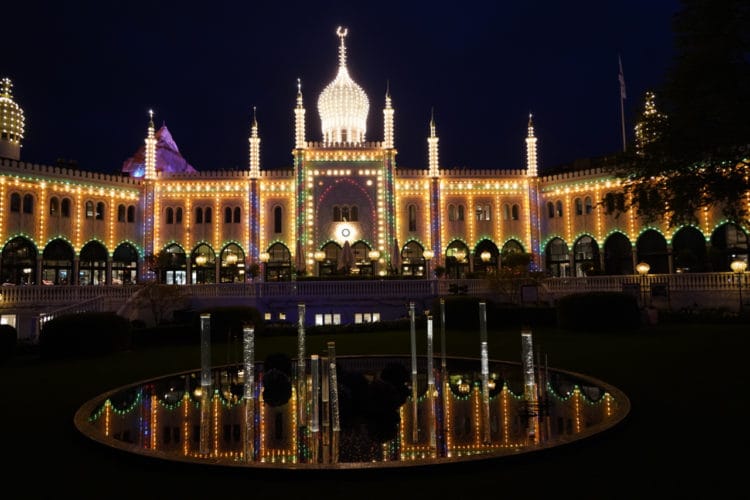 As you can see in the two photos above and in our full photo gallery below, the park looks equally stunning at night. If you can, be sure to visit during the day and night.

In addition to this report, my son recorded a couple of episodes of “Attractions Adventures” from the theme park. Here’s part one and two, followed by our photo gallery.

I got back from Europe last night and while in Copenhagen I experienced this. It was so beautiful and one of the best places I have ever visited. Fun rides, good foods, and beautiful views!

The Princess and the Vlog – ‘Toothsome...