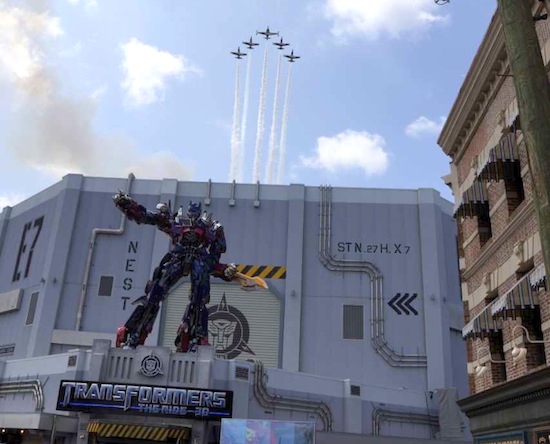 The time has finally arrived to roll out and prepare for battle as Universal Orlando has now officially opened their newest attraction, Transformers: The Ride – 3D at Universal Studios.

The new attraction is based on the popular Transformers films and created along with the award-winning director of the film series, Michael Bay. It blends a action-packed storyline, technology, all-new animation and massive sets into an action-adventure that grabs riders and does not let go until the last second.

Riders are recruited for a high-tech, good versus evil battle in which they must save Planet Earth. They join iconic film characters Optimus Prime and the Autobots as they fight Megatron and the Decepticons to the end. Riders burst into battles between “life-sized,” three-story-tall Autobots and Decepticons. They dodge relentless attacks, explosions and missiles. And come face-to-face with Megatron – who wants to destroy them.

Here’s our photo gallery from the grand opening including celebrities such as Steven Speilberg and the voices of the characters on the red carpet:

Here’s our photo gallery of the ride itself:

Although construction started just over a year ago, we first officially knew the Transformers were coming in a special announcement during the Cinematic Spectacular Lagoon show on Nov. 1, 2012:

Transformers Announced at Universal Orlando during the Cinematic Spectacular

First to open was the Transformers gift shop on March 3:

The next day, Bumblebee and Optimus Prime began regularly meeting with guests at the park:

At the end of March, bad guy Megatron began meeting with guests and berating them:

Megatron talks to guests outside Transformers: The Ride attraction at Universal Orlando

Then the ride officially soft opened in late May. This offered our first look at the detailed queue inside:

For comparison to our grand opening ceremony, here’s a look at the grand opening of the ride at Universal Studios Hollywood on May 24, 2012:

For our full report from the opening of Transformers: The Ride – 3D, including red carpet interviews, be sure to watch the June 27 episode of Orlando Attractions Magazine – The Show.