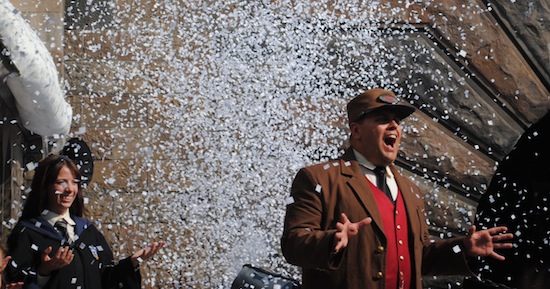 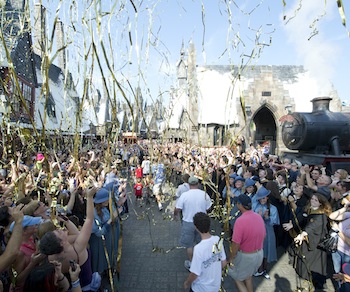 The celebration was not announced ahead of time. The only hint that something different was going on was a small ‘Hot Set’ sign near the entrance to The Wizarding World of Harry Potter.

As the clock struck 9:20 a.m. team members and guests began to line both sides of the street near Honeydukes and the train area. The Hogwarts Express conductor then informed everyone it was the one-year anniversary. At the request of the conductor, guests and team members began to countdown to the exact moment that The Wizarding World of Harry Potter opened a year ago.
At 9:23 a.m. the countdown struck one as “snow” confetti and gold streamers fell from the sky and onto an excited crowd.

Some guests enjoyed complimentary Butterbeer, Cauldron Cakes and Chocolate Frogs. The items were handed out on a first come first serve basis to the crowd of guests who had just enjoyed the countdown.

Harry Potter fans who were not able to visit Orlando this morning can participate in a virtual celebration which launched today. A new “Share Your Story” tab has been created on Universal’s official Facebook page. The all-new tab gives fans the opportunity to interact with one another and share favorite memories and photos from their visit to The Wizarding World of Harry Potter – whether it’s tasting Butterbeer for the first time, watching their daughter as she’s selected by the perfect wand or soaring above Hogwarts with their family. Those who have never been to the park are encouraged to share and learn online from guests who have seen The Wizarding World of Harry Potter first hand.

Today marked the first of many milestones for The Wizarding World of Harry Potter. Happy anniversary!

Here’s a video of the celebration and some interviews with guests, followed by a photo gallery and a look back at the opening:

Here’s a look back at the opening day ceremonies:

Here’s what the fans had to say on opening day:

i was there last year and it was awsome. But the the Giant spiders on the ride who the size of My Mom’s minivan look eDamn scary. But I recommened the butterbeer.