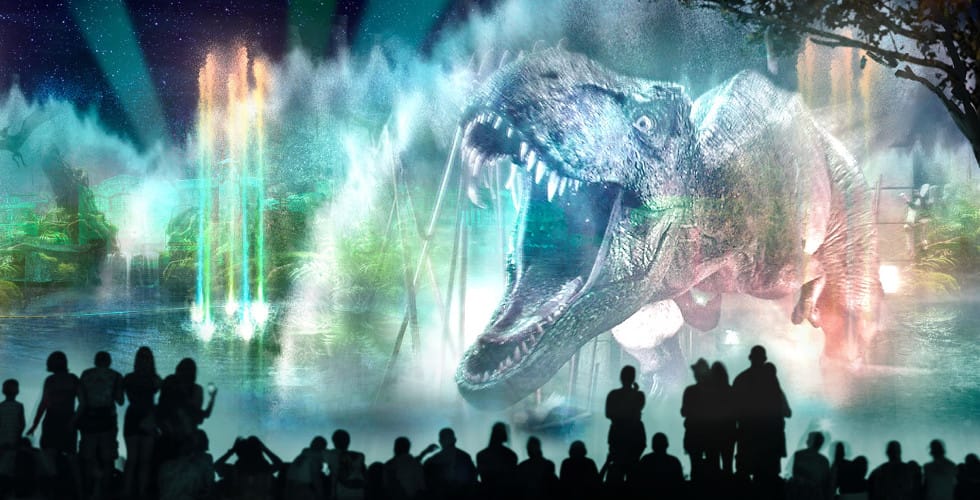 The show went into technical rehearsals last night, July 4, and a crowd of lucky guests were able to see the new show before its official debut. This means that not all of the show’s elements were operational, as last night’s performance didn’t include any pyrotechnics or fireworks due to a storm blowing through the area just before the show began.

Located in the heart of the lagoon at Universal Studios Florida, this new nighttime show will bring iconic moments inspired by characters from Universal Orlando films and experiences to life. You’ll see memorable moments and a few spells from the “Harry Potter” series, hear deafening roars from dinosaurs in “Jurassic World,” get a need for speed from “The Fast & the Furious,” have a little mischievous fun with the Minions from “Despicable Me,” and much more.

All of these moments are projected on full panoramic water screens, with 120 dancing fountains, projection mapping on the ride buildings behind the lagoon, and eventually, pyrotechnics.

Universal Orlando’s Cinematic Celebration is currently in technical rehearsals, with no set official opening date for the full show. If you want to watch the full show minus the fireworks, check out our video below:

If you’d rather wait for the official debut, but still want to see a sneak peek, take a look at any of our shorter videos of the nighttime show:

Suit up for ‘Incredibles 2’ sneak peek...

Q&A: Reflecting on a magical career with...

Join us for ‘Early Night Live’ for...