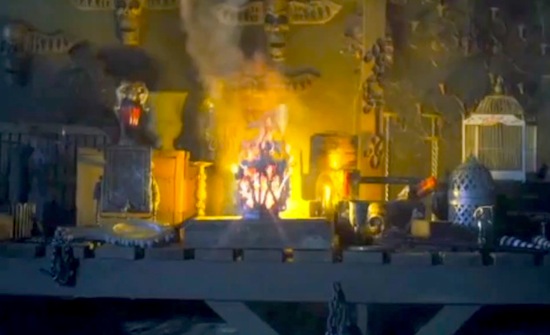 Universal Orlando has revealed their full line-up of haunted houses and scare zones for this year’s Halloween Horror Nights. The theme is Twenty Years of Fear since this is their 20th anniversary. And they’ve even released the name of this year’s icon, Fear – the master of everything Halloween Horror Nights has ever been and will become. But they haven’t fully shown what Fear looks like. Today’s release of their new television commercial shows us a bit more, but not all.

So now we know Fear is really, really big – as tall as a warehouse. And the part of his face we can see is pretty gruesome looking. From what the directors were saying, we’re not going to get a good look at Fear until the event begins on Sept. 24, 2010.

Click Here for the full line-up of houses, scare zones and shows. Also be sure to get the Fall issue of Orlando Attractions Magazine which will have a feature story on the past 20 years of fear at Universal Orlando.