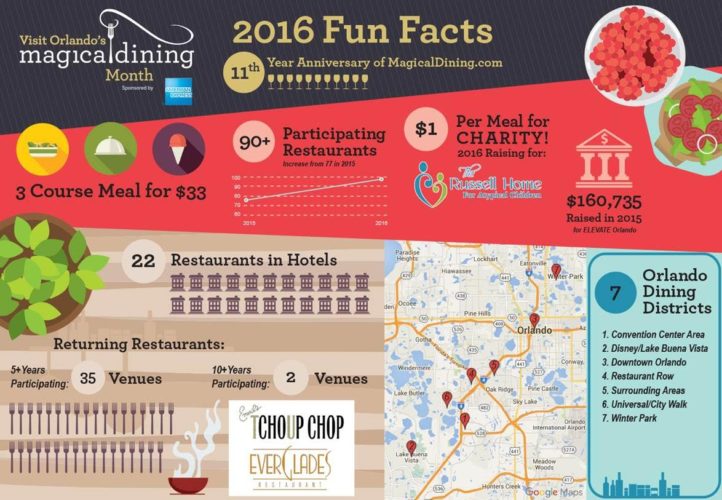 Starting this Monday, foodies can savor $33 three-course meals at 90 popular restaurants in Orlando – including several inside the Disney and Universal resort areas – during Visit Orlando’s Magical Dining Month, sponsored by American Express.

From Aug. 29 through Oct. 2, guests can choose from these participating restaurants to order three-course dinners for $33, averaging a savings of 33% per meal. The program, developed by Visit Orlando, Central Florida’s official tourism association, includes some new arrivals to Orlando’s culinary scene, including chef-driven restaurants in the new Disney Springs area as well as local establishments across town. One dollar from each meal will also be donated to a local charity, with last year’s program contributing more than $160,000 – the largest donation to date.

A full list of all participating restaurants, menus and OpenTable reservations are available at OrlandoMagicalDining.com.

Each year, Visit Orlando’s Magical Dining Month, sponsored by American Express, benefits a local cause chosen the year prior. This year, The Russell Home for Atypical Children is the recipient, and will be given $1 from every Magical Dining meal. The Russell Home is the first non-profit institution in the country to provide a home atmosphere with a family structure for special needs children and ‘child-like’ adults. In continuous operation for over 60 years without any government support, the home also provides 24 hours of free respite care and free day care for the local families with special needs dependents.

Last year, Visit Orlando’s Magical Dining raised a record $160,735 for ELEVATE Orlando. The funds raised by Magical Dining enabled ELEVATE to expand its mentorship programs into Jones High School, equipping thousands of urban youth in Central Florida to graduate with a plan for their future.

For a preview of what you might eat at one of the new Magical Dining Month restaurants, watch this episode of Attractions The Show covering the debut of STK at Disney Springs: