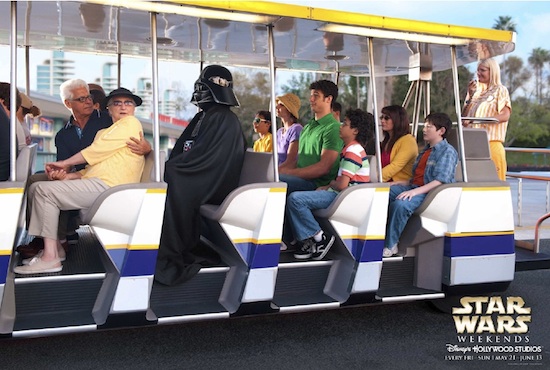 Star Wars Weekends is starting and some of the most popular Star Wars characters are headed to Disney’s Hollywood Studios. Star Wars weekends runs each Friday, Saturday and Sunday through June 13, 2010.

More than 50 Star Wars characters will roam the streets for meet and greets and photo opportunities. Here’s where you’ll be able to find most of them. Although you never know who’ll be around the corner, so keep your lightsabers ready. You can meet the characters from 9 a.m. to 7 p.m. with a pause for the motorcade around noon.

Chewbacca and Ewoks – At the Speeder Bike across from Star Tours
Luke and Leia – Near the Tatooine Traders store
Queen Amidala – Next to Sounds Dangerous
Jawas – Roaming around Star Tours
Mickey, Minnie, Donald and Goofy in Star Wars outfits – Near the ABC Commissary restaurant
Various Jedi – Near Mama Melroses Ristorante Italiano
Star Wars: The Clone Wars characters (photo in a large toy package) – Near the Premiere Theater
Clone Troopers – Roaming around the Premiere Theater
Various Bounty Hunters – Between Pixar Place and the Backlot Tour entrance
Darth Vader – Across from the Studio Catering Company
Darth Maul – Near the Backlot Tour entrance

Celebrities from the Star Wars films and some behind the scenes who helped create the saga will be on hand each weekend for star conversations and autograph sessions. The celebrity hosts for each weekend are Jeremy Bulloch (Boba Fett) and Ashley Eckstein (Ahsoka Tano).

You can see the stars in the motorcade each day, but if you’d like their autograph, you’ll want to arrive at the park early to get a FastPass.

The merchandise area has moved this year. For all the event-exclusive items, you’ll want to head to Boba’s Bounty. The AFI store at the exit of the Studio Backlot Tour will be transformed into Boba’s Bounty. Star Wars merchandise will also be found in the Prop Shop across from the Studios Catering Company. This shop will be called Dark Side Depot. Of course you can always find Star Wars merchandise at Tatooine Traders at the exit of the Star Tours ride.

Here are the other activities you’ll find at Star Wars Weekends:

Star Wars Celebrity Motorcade
Visiting celebrities and Star Wars characters will head down Hollywood Boulevard from the front of the park towards the Star Tours stage, where hosts Jeremy Bulloch and Ashley
Eckstein will welcome everyone and present a group photo opportunity.

Jedi Training Academy
A few chosen kids will get to test their skills with a lightsaber against Darth Vader and Darth Maul.

Stars of the Saga – Star Wars Celebrity Talk Show
Host Jeremy Bulloch will talk about the movie-making adventures of the visiting celebrities. The show ends with an audience Q & A session.

Padawan Mind Challenge
Kids will use their Star Wars: The Clone Wars knowledge to pass the trivia trials and become an official Padawan learner.

Hyperspace Hoopla!
Join the Star Wars characters as they participate in the hilarious intergalactic antics at the day’s closing event.

In addition to the funny photo advertisement above, below are some more ads promoting Star Wars Weekends and a look at some of the event merchandise below them.

Be sure to check the Orlando Attractions Magazine website and YouTube Channel this weekend for some great videos from Star Wars Weekends. You may also follow along with us in the park via @attractions on Twitter. 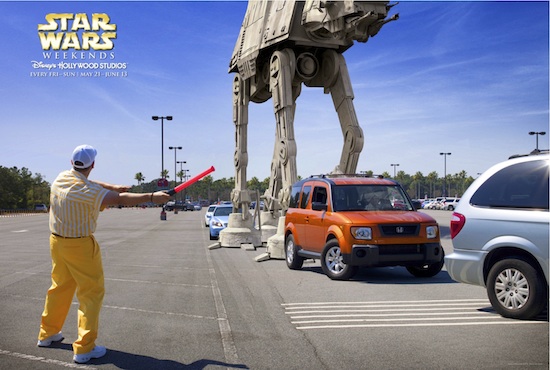 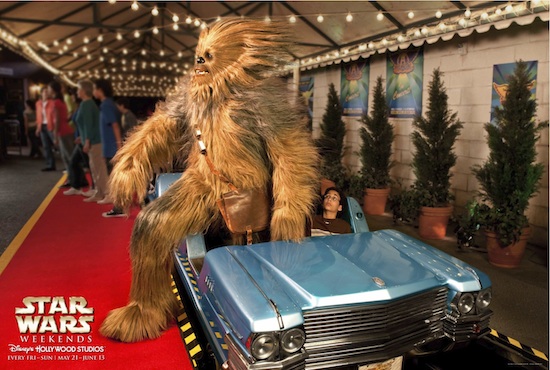 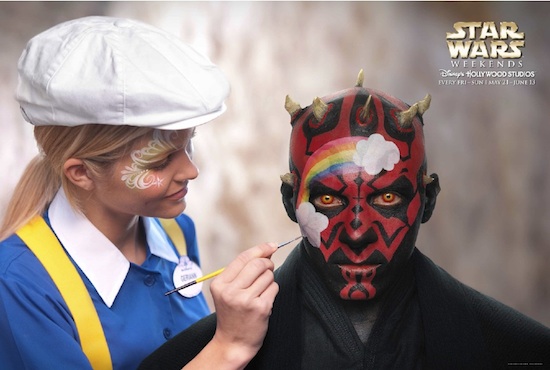 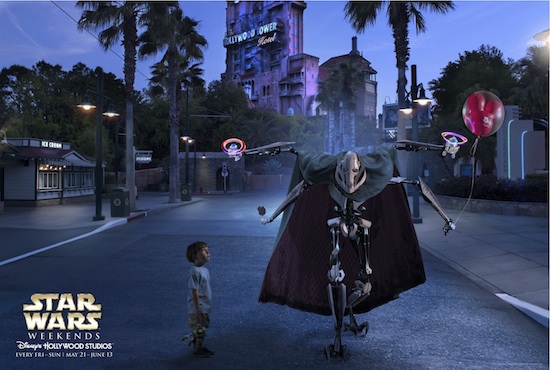 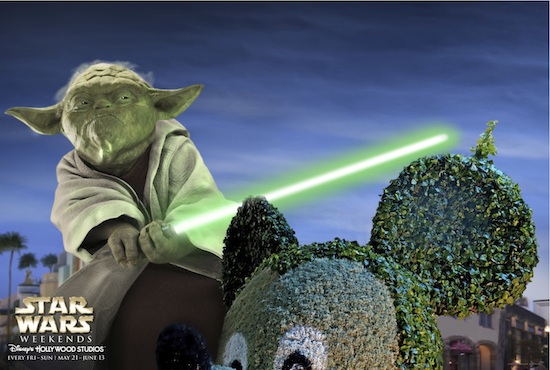 One thing they always forget to mention for the Star Wars Weekends autograph opportunites is that you must get to the park before it opens cause you need fast passes to obtain the chance to meet these actors for the autograph. Sucks if you don’t like to get up early, but is well worth it and it also guarantees you an autograph! So get their before the gates open and enjoy the Star Wars entertainment while you wait for the park to open!

Are adults allowed to wear costumes at Star Wars Weekends? I’ve never been able to find a definitive answer on that.

Yes, adults may wear costumes as long as they don’t pose with guests or sign autographs.