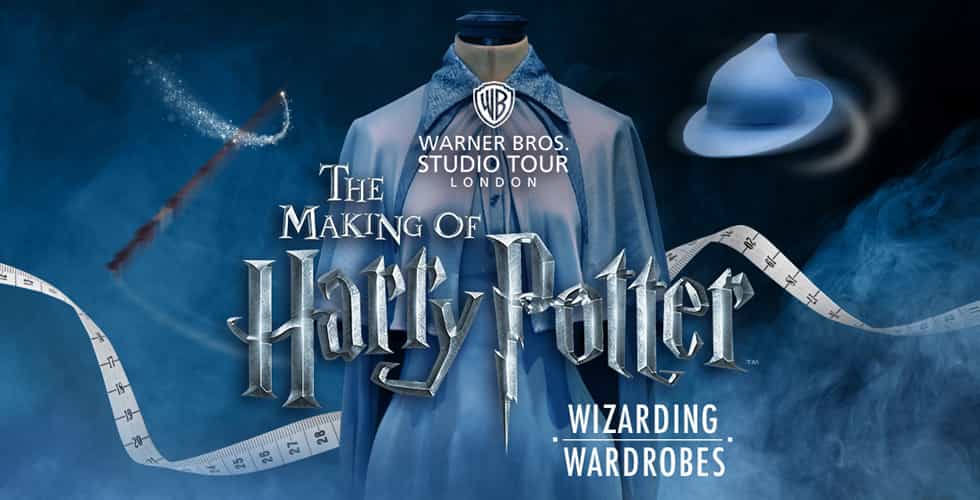 Over the course of its ten years on set, the “Harry Potter” films had over 25,000 costume pieces created for the eight productions. Beginning with over 600 Hogwarts school uniforms, the costumes eventually developed into more extravagant pieces like Hermione’s Yule Ball gown, Professor Slughorn’s lilac pajamas, and Gilderoy Lockhart’s professor’s robes.

This new exhibit at the Warner Bros. Studio Tour London will take guests from first sketch to final product, as they take a behind-the-scenes journey into the costuming of “Harry Potter.” Many of the original and authentic ‘hero’ costumes will be on display, including those worn by Harry Potter, Ron Weasley and Hermione Granger. Other costumes on display will include Hogwarts professors Lockhart, Umbridge and Lupin.

Costumes designed for the Daily Prophet’s reporter, Rita Skeeter, will be on display for the first time ever in this exhibit. Costume Designer Jany Temime was greatly inspired by 1940s Hollywood gossip columnists for Skeeter’s look, and was careful to match her wardrobe to whatever story Skeeter was chasing after, such as her patterned leather suit she wore while reporting on the dragon challenge during the Triwizard Tournament.

Albus Dumbledore’s costume will also be on display, showcasing the hours of meticulous work and effort that goes into creating the clothing for such a beloved character. The process of his costume’s creation will be displayed from the initial cuts of fabric all the way through the final costume.

One of Dumbledore’s battle-worn set of robes will be on display, from the wizard’s encounter with Lord Voldemort at the Ministry of Magic. Guests will step into the role of Costume Designer as they try distressing costumes, learning how new clothes are made to look old or worn with mud, paint and wire brushes.

Guests will be able to view some of the hundreds of wizard hats created for Harry’s first trip to Diagon Alley, as well as the iconic Beauxbatons hats and their design, created by Philip Treacy. Treacy, who has created hats for royalty and celebrities, was asked to design the hats to complete the uniform for the French wizarding school, and the final design was inspired by a hat style called “trilby.”

There will also be a chance for visitors to step into Professor Slughorn’s armchair suit in a demonstration of the practical effect used during “Harry Potter and the Half-Blood Prince.” Slughorn used the suit to avoid capture by Death Eaters in the film, and it required actor Jim Broadbent to sit in a special rig with his arms out to replicate the shape of the chair.

The Hair & Make-Up Department will also be represented in this exhibit, with an all-new display featuring artists Lisa Tomblin and Amanda Knight. The display will show the skills of the makeup and hair team who applied Harry’s iconic lightning bolt scar nearly 6,000 times during the course of filming. Also featured will be exclusive footage illustrating the process used to create the wounds of Muggle Studies professor, Charity Burbage, as well as Bellatrix Lestrange’s sharpened teeth.

The Wizarding Wardrobes exhibit will be on display from Friday, July 21 – Monday, Sept. 4 at Warner Bros. Studio Tour London – The Making of Harry Potter. For more information, visit wbstudiotour.co.uk.

‘The Muppet Movie’ to return to the...