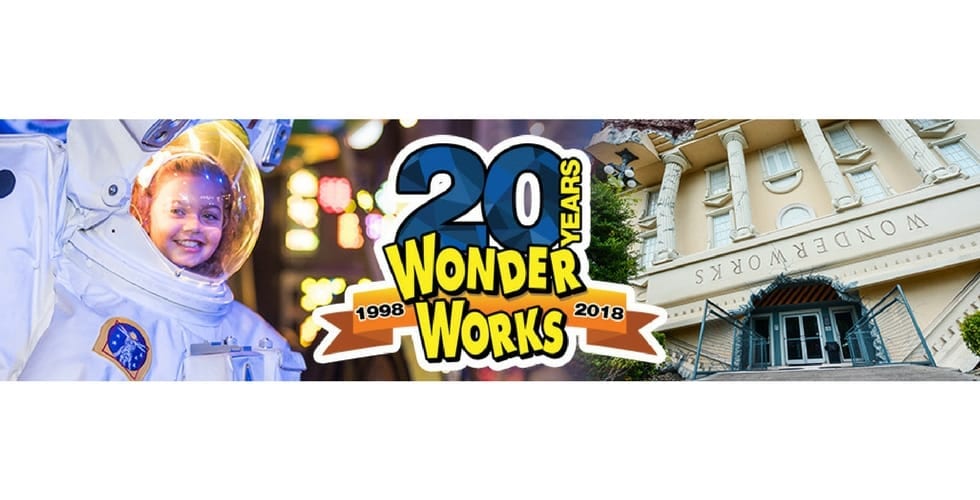 WonderWorks will celebrate its 20th anniversary of being on International Drive this March.

WonderWorks, the science-focused indoor amusement park is celebrating its 20th anniversary of being on International Drive this year on March 2.

In 1998, a Florida attorney named John Morgan founded the first of what would soon be a national chain of educational, indoor amusement parks – all of which inside its iconic upside-down building.

Now in 2018, four more of these unique attractions can be found across the nation, and WonderWorks Orlando is celebrating its 20th year.

“To say I am proud to have reached the 20-year mark with WonderWorks is an understatement,” said Morgan. “I worked in attractions during college, and observed all of the moving parts it took to make a successful theme park. I knew an educational element, along with affordability, could bring something original to tourism in Orlando.”

To lead up to the anniversary weekend, WonderWorks will host their biggest prize and ticket giveaway ever, all to thank those who have supported the attraction over the years. The giveaways include the following:

For Schools: Win a visit from a NASA Astronaut

Schools in the area can enter to win a visit from Don Thomas, a NASA Astronaut. He will give presentations on space travel, take photos with the class, and answer any student questions.

For Businesses: Win tickets for you and all of your co-workers

WonderWorks will give away two tickets per employee to several local businesses, with both large and small staffs. Winners will be notified through a surprise visit from a WonderWorks team member and the WonderWorks mascot, Professor Wonder.

For Everyone: Photo contest to win tickets for the next 20 years

WonderWorks is on the search for photos of or at the attraction from the years 1998-1999. One lucky winner who submits the perfect photo will be given free admission to the attraction for the next 20 years.

“Over the past two decades, tourists and locals have shown that they really love what we have to offer,” said Morgan. “We can’t thank everyone enough, for their unending support.”

During the anniversary weekend, NASA Astronaut Thomas will give presentations on space exploration inside the amusement park on Saturday, March 3. Tickets for the presentation can be found online.

To learn more about WonderWork’s 20th anniversary and to enter for your chance to win one of the giveaways, visit WonderWorksOnline.com.

Celebrity and other fun photos from the...