Out of the Loop: World of Color: Winter Dreams debuts at Disney California Adventure 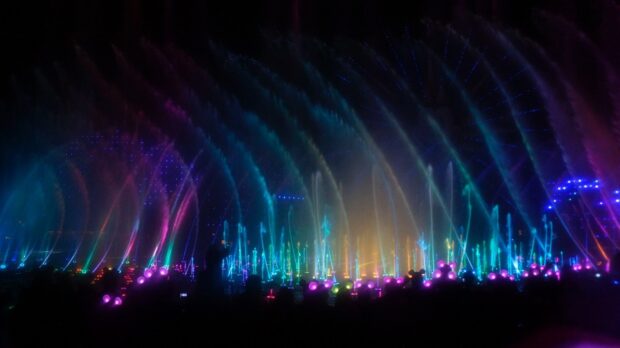 World of Color: Winter Dreams, a new holiday version of the popular World of Color show at Disney California Adventure has now premiered, adding even more to the holiday season at the Disneyland Resort.

Hosted by Olaf the snowman from the upcoming Disney animated feature “Frozen,” the new show combines new animation with classic winter scenes from beloved Disney and Pixar films. The show includes new music and special effects, along with new methods for utilizing the massive stage of water, color and light on which World of Color is presented.

Steve Davison, creative director of the original World of Color show also staged Winter Dreams. Davison, parades and spectaculars, executive for Walt Disney Imagineering Creative Entertainment, said: “I’m thrilled and amazed to see ‘World of Color – Winter Dreams’ come to life on the Paradise Bay. Each night as we worked on the programming, it was fun to see the magic happen as we blended the new music, animation, lasers and special effects into a dazzling holiday show.”

Adding an element of social media, the voices of singers from all 50 United States appear in the “Glow” carol, which opens the show. The participants signed up on a special World of Color Honor Choir website, operated by the Disneyland Resort and Grammy-winning composer Eric Whitacre, who has joined hundreds of voices online in “virtual choirs” that feature singers performing in front of their computer webcams.

World of Color – Winter Dreams unfolds in seven sequences, each one a dreamlike adventure:
• The Pre-Show: Glow Honor Choir Wonder – Season’s Greetings: features the World of Color Honor Choir singing “Glow,” written especially for this new show. Then Tinker Bell’s traditional greeting from “Wonderful World of Color” summons Old Man Winter and the skating Frost Fairies.
• Snow – A Winter Wonderland: Olaf takes guests on a breathtaking winter sleigh ride, encountering Bambi, Thumper and, from “Frozen,” sisters Anna and Elsa.
• Glow – A Season of Light: The holidays are celebrated with images of holiday cards created by Disneyland Resort guests and cast members.
• Enchantment – The Toy Story Nutcracker: This familiar ballet is danced in some delightful, offbeat renditions by favorite “Toy Story” characters.
• Spirit – Holiday Sing-Along: Snowman Olaf has always loved the idea of a warm summer. He innocently imagines himself enjoying the sunshine, then leads the audience in a holiday sing-along.
• Finale – Merry & Bright Holiday Lights: Olaf welcomes a surprising Santa as 700 newly installed lights blaze to life for a colorful finale around the lagoon.
• After Glow: Finale (Honor Choir)

What does this have to do with Orlando? I’m being serious. Either change your name and focus on other theme parks equally or stick to the Orlando stuff. You know, what your name says.

I’m sorry it upsets you. We’ve always had a column called “Out of the Loop” in our magazine and this is an extension of that. Our focus is on the Orlando area, but we also go “Out of the Loop” for coverage outside the area. Many attractions at Disneyland in some way relate to Disney World, either now or in the future.

Yeah, having a whole show about the D23 Expo and Disneyland stuff is really focusing on the Orlando area.

I would say about 95 percent of our coverage is for the Orlando area.

I live in both orlando and Anaheim,Ca.. Im very happy you have this. i was at the first show and it was GREAT!!!!, but ill be back in orlando in Jan. So its good to be able to keep up on both states.. There are more people on here then just you STEVE!!!

I live in georgia and regularly go to disneyworld. For my recent honeymoon the wife and I went to disneyland for our first ever trip there. World of Color was amazing. It’s the highest thing I can recommend to people going. I happen to have both of my parents going there in february. I looked up this article to find out dates, which sadly I didn’t find. Regardless, it was relevant to me. Were that not the case, the griping here is entirely unnecessary. To dedicate one article in a magazine to let the “immediate family” know about the “relatives” is neither unwarranted nor a detriment. Perhaps you just have a case of envy because it’s not in orlando. I won’t hold that against you. I wish world of color was at WDW. But it’s neat to hear about other things unless you’re close-minded. In fact, by mentioning these other cool things going on, it may compel people to go to the other places too.

Thanks for the article! I wish I was going.

Join us for a chilly ‘Early Night...