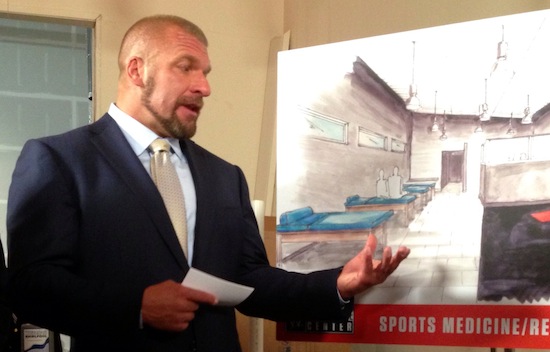 Move over, Mickey … Triple H and his World Wrestling Entertainment (WWE) cohorts are expanding their presence in Orlando.

Earlier today, The WWE, represented by Paul “Triple H” Levesque, alongside Florida Governor Rick Scott, Orange County Mayor Teresa Jacobs and key members of WWE management, held a press conference at the Forsyth Central Commerce Park in Orlando to officially announce the impending opening of the “WWE Global Performance Center”. Conceived to be the new home for WWE talent development, the newly-created 26,000-square-foot behemoth has been designed to match the size and modern training elements of similar facilities used by professional sports teams. 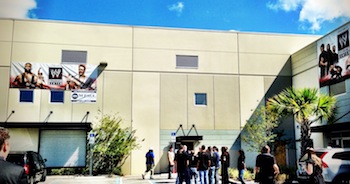 The new Performance Center will replace a smaller, existing developmental facility in Tampa. It will boast seven training rings, areas for strength and conditioning plus physical therapy, and a full soundstage that will allow for TV production training, another important facet of the WWE’s overall product. They will employ approximately 100 people at the location, but only 16 positions will be full-time. The WWE will not be receiving incentives from Orlando for this endeavor,

Although this facility won’t be open to the public, tourists looking to experience the WWE’s unique brand of sports-entertainment can attend a taping for “WWE NXT”, a showcase for many of the up-and-coming superstars (and special guest stars straight from the main WWE roster) that is currently taped every few weeks at Full Sail University, a for-profit college focusing on education relating to various types of media/production careers. Tickets for these tapings can be purchased at the Full Sail Live Box Office, 141, University Park Drive, Winter Park, FL 32792.

A full-scale, TV-quality production utilizing behind-the scenes talents from the WWE alongside aspiring professionals from the Full Sail student body, “WWE NXT” can be seen on WWE.com or through Hulu. This collaboration is part of a relationship between the WWE and Full Sail that includes internships, scholarships, and now, the potential for students to expand their WWE-specialized training via synergy with the Performance Center’s in-house studio and production tools.

Levesque alluded to today’s announcement as just one part of a multi-tiered relationship with the city, fueling speculation that the WWE’s Super-Bowl-sized annual extravaganza, “Wrestlemania” could be returning to Orlando for the first time since 2008. That event drew over 74,000 local fans and tourists to the Citrus Bowl, and future editions are already being bid on by potential “host” cities throughout the country.