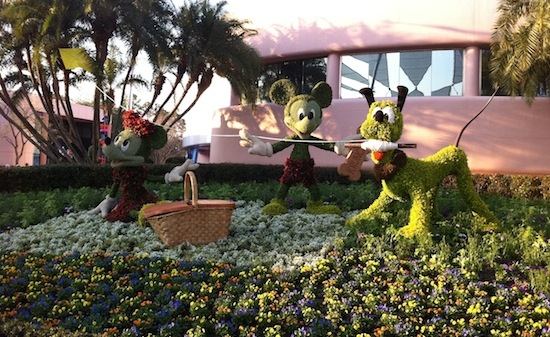 This year’s Epcot International Flower & Garden Festival will be hosted by HGTV, and will run from March 2 through May 15, featuring appearances by HGTV designers and experts. Every weekend of the festival (Friday – Sunday) will feature guest appearances by popular celebrity experts at the Festival Center presented by HGTV, located next to Mission: Space in Future World.

The Festival Center will feature daily seminars, demonstrations, discussions and Q&A sessions. The HGTV Designers’ Stage presentations are dedicated to gardening and design topics, while the Greenhouse Stage will feature expert tips and secrets that guests can use in their own gardens. Planting Pointers will feature experts from the University of Florida’s Institute of Food and Agricultural Sciences, who will offer gardening tips and ideas, as well. 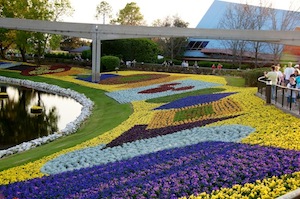 HGTV will also present a new and improved Bambi’s Butterfly House, which is now twice the size it was previously and houses hundreds of native butterflies, as well as several character topiaries inspired by the Disney film.

In addition, numerous other Disney character topiaries and displays will be on display, including characters from Toy Story 3 and Cars 2. The Toy Story display will feature heroes Woody and Buzz Lightyear facing off against the villainous Lotso in the Future World front-entrance garden, and will mark the first time that any Toy Story characters have been featured at the Festival. Cars characters Mater and Lightning McQueen will also be represented in their own display at the World Showcase plaza. In total, there will be over 100 expertly crafted topiaries at the Festival this year.

Some other new displays and attractions include: the Pixie Hollow Fairy Garden, where Disney fairies will

pose for pictures and sign autographs; Rapunzel’s Tower in the Tangled Magical Garden, where guests can meet and pose with Rapunzel from the Disney film, Tangled; a Sustainable Beauty Garden; and Disney Gardening at Home presentations.

Flower Power concerts will also be available every weekend at the open-air America Gardens Theater, and will feature popular songs from the 1960s through ’90s, with performances by Jose Feliciano, Davy Jones, Chubby Checker & the Wildcats, Melissa Manchester, Marilyn McCoo & Billy Davis Jr., and many more.  Here’s the schedule:

The Festival, including all features and presentations, is included with daily Epcot admission. For more information, go to the Epcot website here.

The HGTV celebrities participating are:

Lisa LaPorta, Designed to Sell (March 11-13)
Design It Yourself: Easy-to-follow Tips for Designing Your Favorite Rooms

Kim Myles, Myles of Style (March 18-20)
The 5 DIY Secrets That Can Transform Any Space

Taniya Nayak, Designed to Sell and Destination Design (April 1-3)
Adding Value to Your Home Without Breaking the Bank

Frank Fontana, Design on a Dime (May 6-8)
Beautiful on a Budget: High Style, Low-Cost Secrets to Bringing Indoor Styling Outside

Stars in the Parks: iCarly's Jennette McCurdy in the Wizarding World

Just curious–how crowded is it during the week day, during this entire event? Like say a wednesday or thursday?

Toni – I’ve visited several times during the festival and I haven’t noticed a large increase in crowds on weekdays. Some specific exhibits may be crowded, like the butterfly experience but not necessarily the park itself. If you’ve never been, I highly recommend it. The dispays are beautiful and in particular the topiaries and rose garden are spectacular!