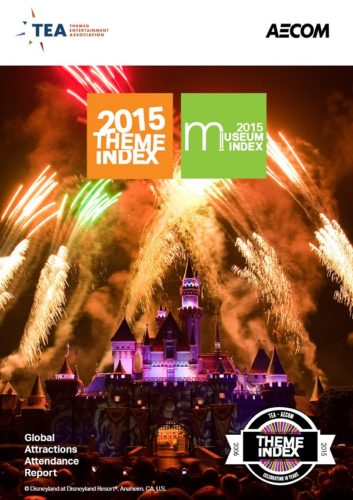 The major theme parks don’t release official attendance statistics, but the newest edition of the next best thing has arrived. The 2015 TEA/AECOM Theme Index report has just been released, revealing the Themed Entertainment Association’s best estimates of how many guests visited each attraction last year.

The attendance study, now in its 10th year, is created and distributed by the Themed Entertainment Association (TEA) and the economics practice at AECOM. The new study, and prior editions dating to 2006, is available freely online at http://www.teaconnect.org/Resources/Theme-Index/ and http://www.aecom.com/themeindex.

Compared to the previous year, attendance grew by over 5 percent at the top 25 theme parks in the world and over 7 percent for the top 10 theme park groups. Attendance at the top 20 water parks grew by 4 percent. Museum attendance held steady globally, but with nearly 3 percent growth in North America.