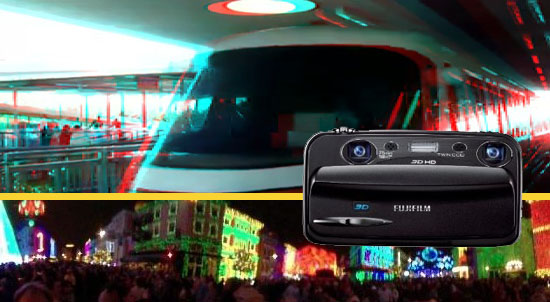 One of the comments we hear most often is that you love our magazine, website, videos and show because they help bring you away from your daily lives and into the theme parks. With that in mind, we’re always looking at the latest technology that will help us immerse you even more. Below are links to the results of our latest tech toys – 360 degree photos, 360 degree video and 3D videos from Orlando area attractions.

All of these photos and videos look best when viewed on their respective websites, so please click on the photos or links below to view them. Then come back here to click through to the rest.

First up let’s look at some 360 degree photos. They’re cheap and easy to make for anyone with an iPhone. But as you’ll see, they don’t produce perfect results. They were created with an app called 360 Panorama. Once the photo opens, click and drag to look all the way around:

to purchase and download the 360 Panorama app for your iOS device.

The effect is especially cool when you look at the photos within your iPhone. Using the phone’s gyroscope, you can stand in one spot and spin while looking at the photo and it’s like you’re really looking around the area. It works even better on an iPad.

To see all our 360 photos, including future ones, bookmark occipital.com/user/a85d-49762/attractions-magazine

Next up, let’s look around 360 degrees, but inside of a video. This product and app also works for iPhones. You snap a special lens on your phone and the app unwarps the video. Because it’s essentially stretching the regular size video, the results aren’t the clearest, but it’s still really cool to click and pan around videos.

Please excuse having to see me in all the videos. The way it works, it’s hard for the person taking the video to not appear.

to buy the GoPano Micro for iPhone.

To see all our 360 videos, including future ones, bookmark gopano.com/person/Attractions

Last are our 3D videos. Depending on how you view them, these produce the neatest and clearest effects. On the YouTube page, click on 3D to change the settings to best fit your set-up. You can use some red and blue glasses you may have lying around, try using the cross-eyes method, or many other options. But you’ll get the best results if you have a 3D television that has access to YouTube.

You can use any 3D camera to produce 3D videos, but we use a Fuji camera.
Click Here

Win an overnight stay in Pandora –...