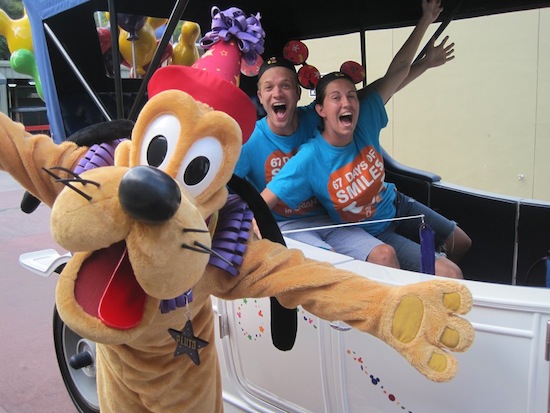 After beating out hundreds of applicants from more than a dozen countries, the former Broadway performer and Harlem childcare worker, were named Orlando’s Smile Ambassadors back in August. The two were awarded $25,000, put up in a luxury condo at The Paramount on Lake Eola in downtown Orlando, provided with a Dollar Rent A Car and equipment to begin their 67-day journey on Aug. 27, 2009.

On Nov. 1, as they served as Grand Marshalls in the parade at Magic Kingdom, Kyle and Stacey completed their final day as Orlando’s Smile Ambassadors. For 67 consecutive days the friends faced something new everyday – from jumping out of an airplane at 18,000 feet and being some of the first to stay at the New Waldorf Astoria Orlando to singing the national anthem at an Orlando Magic game and celebrity encounters including Shaquille O’ Neal, Iron Chef Cat Cora, The Bangles and Joey Fatone. Through the journey Kyle and Stacey documented each experience with updates on Twitter, Facebook and their blog 67daysofsmiles.com. They also developed a final video recapping their entire 67 Days of Smiles experience in Orlando (Below).

“We knew that Orlando has amazing theme parks and great resorts, but what really surprised us was the diversity of things to do,” said Stacey. “We had no idea about the arts and cultural aspects of Orlando and no idea that downtown Orlando was so hip. And the adventure stuff – skydiving, flying a warbird plane, riding Harley’s, parasailing and so much more – that really blew us away.”

“It seemed like almost every day we had at least one, ‘pinch me’ moment where we just couldn’t believe this was happening to us,” said Kyle. “From kissing a beluga whale at SeaWorld to an entire day the The Spa at the Ritz Carlton Orlando, Grande Lakes with a butler, something every day took our breath away.”

Billed as the year’s top social media job by applicant.com, the Orlando CVB created the Smile Ambassador positions to launch their social media sites and showcase the diversity of experiences Orlando has to offer.

“Through the eyes of this fun-loving pair, thousands not only learned more about what Orlando offers, but really became engaged and connected, which is what social media is all about,” said Gary Sain, Orlando CVB president and CEO.

Kyle and Stacey are childhood friends who grew up together in Holland, Mich. They share a passion for theme parks, having taken 30 amusement park trips together to enjoy more than 618 rides, prior to their 67 Days of Smiles Adventure. They took a “friendship honeymoon” to Orlando at the end of college to celebrate their friendship, not knowing where their lives would take them. Kyle then moved to New York City and five weeks later was cast in the Broadway production of RENT. Stacey traveled the world, touring seven countries in three months before also ultimately ending up in New York City to work with underprivileged children in East Harlem.

Vote for us in The Orbbies blog awards