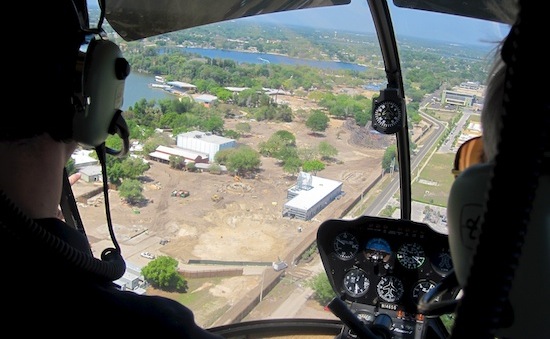 We were invited by Legoland Florida officials to tour the under construction theme park yesterday from ground level and above. We also had a chance to ask some questions about the park. Here’s what we saw and found out.

Let’s start with our video from the helicopter tour:

As you can see, there’s still a lot to be done. Construction Manager Craig Riebel told us they’re on schedule for an October opening but that they’ll soon be doubling the amount of construction workers on site to get it done.

Before our visit, we asked our Facebook and Twitter followers if they had any specific questions. Here are some of their questions and the answers and some of our own. Watch next week’s Episode 18 of Orlando Attractions Magazine – The Show for our interview with Legoland Florida General Manager Adrian Jones.

Has an opening day been set?
No. The opening will be in October but they won’t set a date until closer to October.

The operating schedule for November and December shows the park closed most Tuesdays and Wednesdays. Will it always be this way?
They hope to eventually be a 365-day a year park, but they’re being cautious with the schedule at first.

What are the expansion plans after the park is open?
Their first priority is making the theme park a success. If that happens, they’ll consider a water park and resort on property.

Have any plans been made for transportation to and from Orlando?
Yes, they’ve arranged for a bus to pick up at the Orlando Premium Outlets on Vineland Avenue. The ride will be at a minimal cost and free with some ticket packages.

Will they offer birthday packages?
Yes, Legoland is big on birthday parties. They will be held in one of the restaurants or other buildings at the park. No prices have been set yet.

The park is marketed for ages 2-12. What is there to do for older kids?
Not much. They said they’re not trying to be everything to everyone. They’re trying to market to young kids and do it right.

Here’s a new map of the park they released yesterday. Click on it for a larger look. Also check out our photo gallery below. 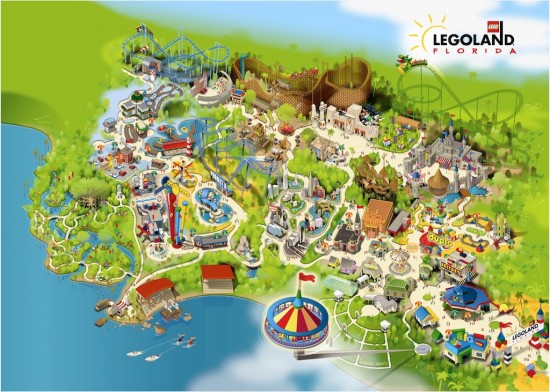 The LEGOLAND Florida theme park located in Winter Haven, FL will be adding an official LEGOLAND Florida Hotel comparable to the one in California but with 5 levels and with 150 rooms in 2015.

Join us for a chilly ‘Early Night...