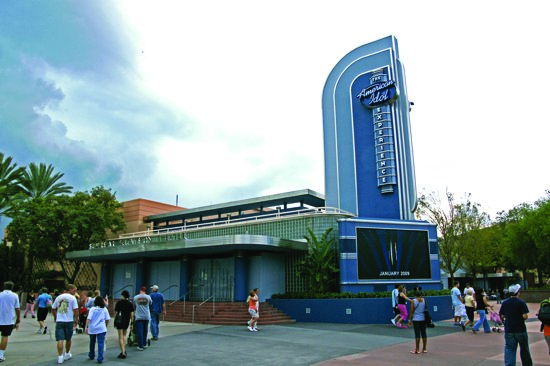 The opening of the new American Idol Experience attraction at Disney’s Hollywood Studios has been pushed back to mid-February with possible Walt Disney World Annual Passholder previews near the end of January.

A sneak preview of the inside of the Idol theater and audition areas was offered to Passholders today (Dec. 14, 2008) during which I learned the basics of how the attraction will operate.

There are two aspects to the American Idol Experience: auditioning/performing and watching from the audience.

Those who think they can sing and want take part in the audition process begin their American Idol experience behind the building in a separate queue from those wanting to simply watch. Auditions begin when the park opens. I estimate the queue for Idol hopefuls can hold around 100 people, though Disney may extend the queue around the building if hundreds show up to audition.

While guests stand in that queue, a Disney cast member will bring a camera around, recording those in line for potential use later on. I would imagine that if the ultimate winner of the American Idol TV show is found at the attraction, they’ll want to have some video to show where they began their journey.

There are four separate and sound-proof audition rooms, so four guests from the audition queue are let into the building at a time. Each is allowed to bring one person in with them for support. It all feels very official and professional inside this area, likely adding to nerves when guests step inside. Gold records from past American Idol TV stars will line the walls, adding to the significance of the area.

Inside each of the audition rooms is a desk in the center, a white macbook laptop on the desk, a Herman Miller chair behind the desk along with an American Idol backdrop. Seated at the desk will be a cast member/judge for whom guests will perform.

Guests may sing any song they would like a capella for around one minutes. The judge at the desk will be trained to both recognize a good singing voice and in the art of guest relations, so they can politely tell guests they aren’t good enough without hurting anyone’s feelings.

If the judge allows the guest to move on, they continue down a nearby hallway to a side area that resembles the red room on the American Idol TV show. Red seats line two walls with small tables between them on which iPods will sit. Guests making it to this stage will use the iPods to select one of more than 100 songs to sing in the next round of auditions. Song lyrics are on the iPod and guests will have a few minutes to get familiar with the song they choose before moving on to the “producer’s” room.

This final audition room is similar to the first but feels more important and professional. It is the equivalent of singing in front of Randy, Simon and Paula in the audition phase seen on the TV show. Inside this room, is a large American Idol red backdrop similar to what is seen on the show. Guests are video recorded during this phase and will sing the song they chose from the iPod. In front of them is a large plasma display mounted on the wall where the lyrics will be shown, so it’s all about the singing at this point, not remembering the words.

The judge in that room will either politely tell guests they aren’t good enough for the stage or American Idol host Ryan Seacrest will appear on the screen and tell them they’ve made it through. Upon making it, guests are given a show time later in the day.

Guests moving on will be given a lanyard that identifies them as Idol contestants for the day. At that point guests are encouraged to walk through the theme park asking people to come to their show and vote for them.

One hour before the show time, performing guests will receive some help from a vocal coach.

For guests simply wanting to sit in the audience, they will enter a queue in the front of the building where they can watch a pre-show video hosted by first season American Idol runner-up Justin Guarini. 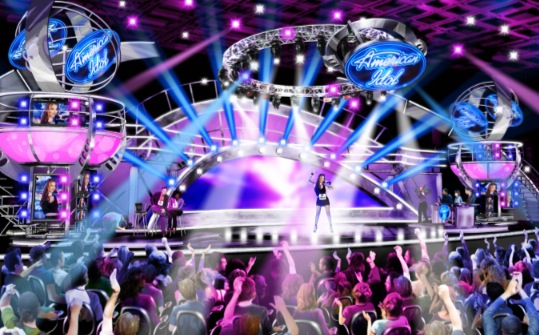 The theater holds up to 1,000 people. The Idol stage is nearly identical to the set seen on TV (and the concept art above), with lots of bright colors, spinning lit-up American Idol signs, a big curved screen in the back of the stage, and plenty of plasma displays. If you’ve seen the TV show, you’ve seen this set. The Disney version was designed by the show’s set designer and is the same width as the real stage. The only difference is that this stage is 1/3 of the height of the real one.

On the right side of the stage is a desk where the judges will sit, facing the audience. These judges are for show and will not effect the outcome of the performances. They will be similar in character to Randy, Paula and Simon, but the Simon-type character won’t be as harsh; he’ll stay very “Disney”.

All three singers during each of seven shows during the day will perform, after which the audience will vote using the numbered keypads on their armrests to choose a winner. The winners move on to the finale show at the end of the day.

The finale will feature the seven winners from the day and again the audience will vote. The winner of each day’s finale will receive a special pass allowing them to skip the line at their next regional American Idol TV audition.

Fans of American Idol will love walking into the theater as it feels exactly like stepping onto the TV show’s set. I would imagine that should some talented singers make their way into Disney’s Hollywood Studios, the performances could be very entertaining. However, if the singers are made up of average (or below) singers day after day, this attraction could be your eardrums’ worst nightmare.

Behind the Scenes: Wheel of Fortune tapes at SeaWorld Orlando