Amusement Musings: To experience life among wizards and witches 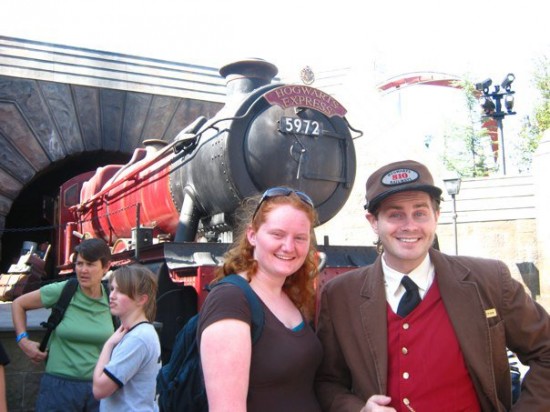 My Hogwarts letter was safely stowed in my bag – my owl was hooting beside me, and I was anxious for my day to start. OK, I didn’t have a letter or an owl, but I was still on my way to Hogwarts in The Wizarding World of Harry Potter. For 12 amazing hours I explored Hogwarts, picked a wand at Ollivanders and munched a chocolate cauldron at Honeydukes.

I arrived at Universal’s Islands of Adventure early in the morning ready to to explore Hogsmeade. Along with a hundred other Harry Potter fans, I marched my way through a deserted park. I will never forget the first moment I saw Hogwarts Castle. The looming structure towered over me and I stared up in awe. I was really here!

Walking through the gates of the castle was like a childhood dream come true. Hogwarts was a real place for me and it existed in that moment. The castle itself was beautiful and the interior was right out of the movies. The Mandrakes squealed, the portraits talked and the Sorting Hat stared at me. I got to gaze into the Pensieve, examine the Defense Against the Dark Arts classroom and wandered through Gryffindor common room. Then it was onto the adventure itself. The ride was incredible! I flew along with Harry and we competed in a Quidditch match and battled Dementors. When the ride was over, I felt like I had flown through my childhood.

The Wizarding World is not simply Hogwarts Castle. The magic continues throughout the picturesque village of Hogsmeade. Even though it was a warm spring day, the snow hanging from the rooftops had me wishing for a hot chocolate from The Three Broomsticks. The Dragon Challenge roller coaster was certainly scary enough, with plenty of twists and turns. However, it did give me a headache, so I only rode it a few times. For a tamer roller coaster, The Flight of the Hippogriff did the trick.

Sure, the rides were great, but they were not the experience. It was the world of Harry Potter alive before my eyes. I had lunch in the Three Broomsticks. I sipped Butterbeer while watching a house elf clean. I explored Honeydukes and found Fred and George’s tricks in Zonkos. Chatting with the conductor at Hogwarts Express and picking my very own wand at Ollivanders are experiences I will never forget. For just a moment, an ordinary Muggle like me got to see what it would be like to live in the Wizarding World. And, that is a memory that will live with me forever.

“…it did give me a headache, so I only rode it a few times.”

It is a wonderful place.