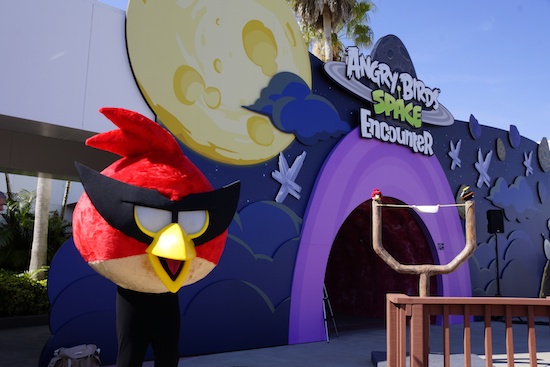 There was a launch this morning at Kennedy Space Center Visitor Complex, but it’s not the kind you usually associate with the Space Center. Some unhappy fowl were launched at a spaceman holding a photo of a pic to officially open the new Angry Birds Space Encounter attraction. 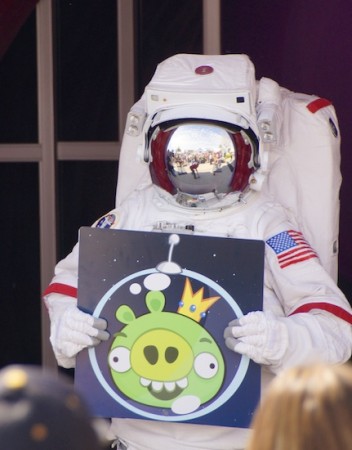 You most likely know Angry Birds from the mobile game that has been a top app store seller for years. This new area is the first comprehensive, interactive Angry Birds attraction in the United States designed for people of all ages. The Kennedy Space Center Visitor Complex partnered with Rovio Entertainment, creator of the Angry Birds franchise, to bring the beloved characters to life.

The 4,485-square-foot Angry Birds Space Encounter, which is included in regular admission, brings to life the space adventures of the Angry Birds as they follow their kidnapped eggs into an inter-galactic wormhole, come face-to-face with Space Pigs and gear up with heroic superpowers. Visitors encounter six interactive stations designed to engage and immerse guests in a new dimension of Angry Birds Space:

• Cold Cuts Tile Puzzle – Guests line up a universe of planets and Angry Birds to solve sliding puzzles, with three levels of difficulty, featuring images of Super Red, Ice Bird, The Incredible Terence and Space King, Pig in a Bubble.

• Create Your Own Angry Bird – Red, green, blue or purple – Guests create their own Angry Bird by choosing from an array of body styles and accessories. When the bird is complete, guests can print their bird as a keepsake.

• Eggsteroids Slingshot – Guests take their best shot – slingshot, that is – at King Pig and Corporal Pig, competing with fellow players using mini Angry Birds launched in a slingshot to zap the Space Pigs.

• Red Planet Lazer Challenge – The Angry Birds need help finding their prized golden eggs! Guests journey to the surface of the Red Planet to search for the mythical eggs but need to watch out for lazer beams that create obstacles along the course, making the mission more difficult.

NASA astronaut Donald Pettit, Ph.D., who previously announced from the International Space Station that NASA and Rovio would partner on the creation of the Angry Birds Space game, was also on hand for the grand opening.

“NASA and Rovio have worked together to teach players about physics and space exploration and energize young people regarding future careers in science and technology,” Pettit said.

Entertainment Design Group of Austell, Ga., developed, built and installed the Angry Birds Space Encounter at the Visitor Complex under the direction of NASA and Delaware North.

The opening of Angry Birds Space Encounter comes a few months before the Visitor Complex will celebrate the grand opening of the new $100 million home of Space Shuttle Atlantis June 29.

Here’s a video walk-through of the attraction:

The process to prepare a space shuttle...

‘Summer of Mars’ kicks off at Kennedy...