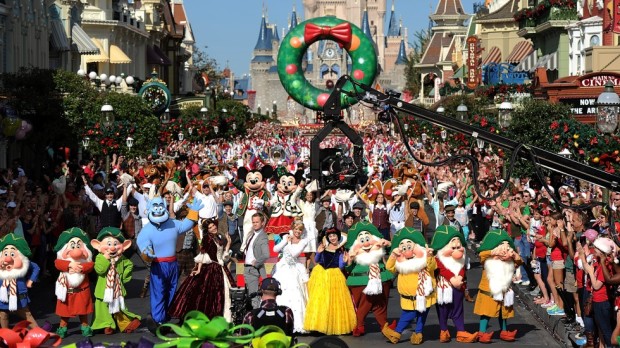 For 32 years, families have come together at the holidays to experience the annual Disney Christmas Special on ABC, both at home on Christmas Day and in the parks during the filming.

This year, the name has changed once again. The “Disney Parks Unforgettable Christmas Celebration” is set to be filmed at the Magic Kingdom for four days, Nov. 10-13, 2015. Disneyland will be filming Dec. 11-13, marking the first big change in years for the filming dates, which have usually been the other way around.
UPDATE: We have heard the Disneyland portions have been canceled, but we haven’t confirmed it yet.

The new name reflects the current ad campaign for Disney Parks, “Unforgettable Happens Here.” No word yet on who the hosts or performers will be, but past personalities included Neil Patrick Harris, Robin Roberts, Ryan Seacrest, Regis Philbin and Kelly Ripa.

Filming is scheduled to happen on Main Street USA and the Castle Stage during the dates. No word on which areas will be filmed on specific dates.

The “Disney Parks Unforgettable Christmas Celebration” will air Christmas Day on ABC. Take a look at the filming for previous years in the videos below:

‘Diary of a Future President’ to premiere...

Suit up for ‘Incredibles 2’ sneak peek...