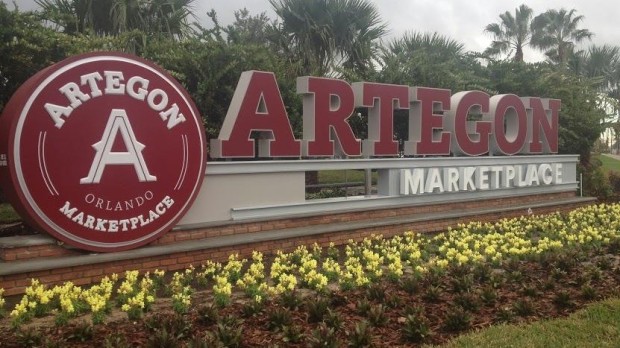 Four food kiosks are scheduled to open this month in the center’s Great Hall:
• At Florida’s first U Roll Express, customers can create their own sushi roll by choosing from a variety of sushi-grade ingredients, toppings, and sauces and flavorings.
• Operated by Belgian owners, The Belgian Waffles kiosk sells authentic Liege or Brussels-style waffles with several sweet topping options.
• Francophiles can get their fix at the Le Petit Café kiosk, serving traditional hot and cold espressos, teas and coffees, frappes, croissants and other pastries, and gourmet sandwiches.
• The Yogen Früz kiosk will purvey nutritious frozen desserts.

Scheduled for an April opening is the nation’s first International Hot Glass, a 4,300-square-foot glass gallery showcasing artists from around the world and a studio where guests can work with a professional glass blower to create their own piece of art.

On track for a June debut is Gods & Monsters. Occupying 19,000-square-feet, the comics and collectibles store will offer the genre’s most sought-after merchandise including new and rare releases, import items and vintage collectibles along with a gaming lounge, a food service center, and a pop-culture, fine art gallery.

This summer will also bring the scheduled opening of Sky Zone, the second Central Florida location for “the world’s first indoor trampoline park.” Guests experience “fun fitness” and the weightlessness of bouncing, flipping and landing in a pit filled with 10,000 foam cubes with trampolines from wall to wall.

Since opening last November, one major dining anchor (Toby Keith’s I Love This Bar & Grill) and several small retailers have debuted, including Beef Jerky Outlet, the national brand’s first store in the region selling more than 200 different kinds of jerky, including exotics like alligator and kangaroo; and bonposh, Orlando’s largest fashion jewelry outlet. A number of artisans have expanded their spaces or taken up residence within The Village at Artegon Marketplace. Examples include the doubling of Florida Soap Company’s footprint to 500 square feet; and the addition of The Paper Airplane Museum & Store.

“We’re off to a great start, with local residents and visitors, alike, embracing our bold new shopping concept for Orlando,” said General Manager Thearon Scurlock. “We continue to curate a rare collection of the area’s most talented artisans along with food and drink purveyors, first-to-market brands in dining and retail, as well as must-experience attractions, making each trip to Artegon Marketplace a totally new shopping adventure unlike any other in the area.”