Disney has announced they have entered into a long term partnership with James Cameron’s Lightstorm Entertainment and Fox Filmed Entertainment to bring characters and settings from the hit movie Avatar to Disney’s theme parks. It will all begin at Disney’s Animal Kingdom in the next few years. 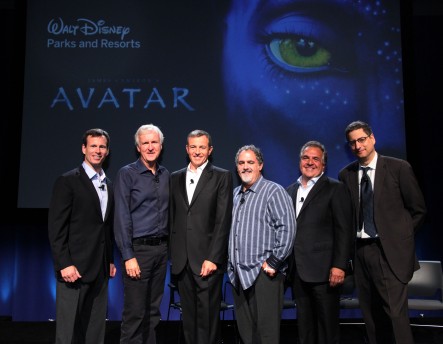 James Cameron, his partner Jon Landau and their team at Lightstorm Entertainment work with Disney’s Imagineers to bring guests into the world of Avatar. Two more Avatar movies are scheduled to be reproduced and released.

Construction is set to start at Animal Kingdom in 2013. Animal Kingdom is listed as the first Avatar-themed land, so others may be announced for other Disney parks outside of Florida in the future. 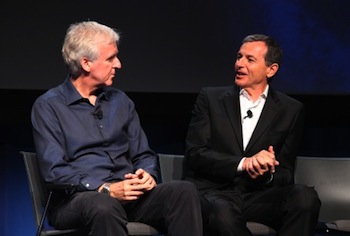 “James Cameron is a groundbreaking filmmaker and gifted storyteller who shares our passion for creativity, technological innovation and delivering the best experience possible,” said Disney President Bob Iger. “With this agreement, we have the extraordinary opportunity to combine James’ talent and vision with the imagination and expertise of Disney.”

“Avatar created a world which audiences can discover again and again and now, through this incredible partnership with Disney, we’ll be able to bring Pandora to life like never before. With two new Avatar films currently in development, we’ll have even more locations, characters and stories to explore,” Cameron said. “I’m chomping at the bit to start work with Disney’s legendary Imagineers to bring our Avatar universe to life. Our goal is to go beyond current boundaries of technical innovation and experiential storytelling, and give parkgoers the chance to see, hear and touch the world of Avatar with an unprecedented sense of reality.”

“Avatar is a uniquely powerful franchise that has global appeal with audiences of all ages. Its spectacular settings, intriguing characters, imaginative creatures and strong themes of family and loyalty make it a perfect fit for Disney,” said Parks and Resorts Chairman Tom Staggs. “We can’t wait to give our Guests the ability to journey to Pandora and explore the incredible immersive world of Avatar in person.”

“This exciting new venture combines the world of Avatar with the enormous reach of Disney and the incomparable talent of Jim Cameron,” commented Fox Filmed Entertainment chairmen Jim Gianopulos and Tom Rothman. “While Jim is bringing audiences further into Pandora with the next two chapters in the Avatar motion picture saga, the theme park attraction will likewise bring a new dimension to the amazing universe he created.”

UPDATE: Walt Disney Parks and Resorts Chairman Tom Staggs answered some questions e-mailed by fans on the Disney Parks Blog. Here are some of his more interesting comments:

“We’ve just begun the design phase on our Animal Kingdom project and we expect to begin construction in 2013. From start to finish, a project of this size and scope takes about 5 years to design and build. We can’t give you an exact date but we know that when it’s complete, it’s going to be a truly unforgettable experience.

“While we’re still in the very early stages of design and planning, we expect this land to be anchored by multiple attractions, entertainment, merchandise locations, restaurants and other immersive elements.

“Disney’s Animal Kingdom is the perfect place for our first Avatar land because at its core, the park gives guests the opportunity to experience the worlds of animals and nature – real and mythical – in whole new ways. 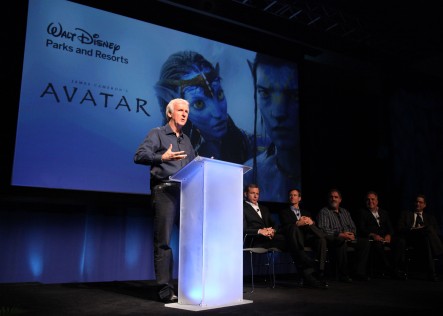 I’m surprised at the “love/hate” reactions I’m seeing about the news. I’m in the “wait and see” camp. Disney hasn’t disappointed me so far, but at the same time, I’m having a hard time seeing how Avatar will fit in.

Yeah it´s not a fit at all.
Wonder if they use the omnimover system again. It seems the only ride system they use effectifly. What I´m saying is I hope they don´t use a existing technolegy but surprises us like Universal did with Spiderman and Harry Potter.
I´m also wondering about the shops and restaurant. Will they be set in the greedy corperation basecamp? It would be so appropriate for Disney Co.

Really!? I am not seeing how this is going to fit in with Animal Kingdom at all. I love Avatar but not feeling it for a place that is filled with animals and places from the natural world; the Pandora landscape feel nothing like things here on planet earth.

Can we say Harry Potter panic? Do the suites really think it’s not obvious? Yet another reason NOT to visit Animal Kingdom.

Now I am obsessed with Disney. I love reading about attractions both lost and upcoming. My one dream/wish has always been that they bring Beastly Kingdom to AK and get rid of that horrid meet and greet (like they need another). This seems to be their way of “updating” their original plan of BK. If Avatar completely wipes it off the 10, or even 40 year plan, I’m not going to be very happy.

I’m sure it’s Disney’s way if competing with Wizarding World of Harry Potter. Wasn’t there supposed to be some kind of fantasy creature land when AK was originally planned. Maybe it’s their way to bring that idea back. I wasn’t a fan of the movie so I’m not so excited about this announcement.

i think they will be pushing the conservation angle put over in the movie caused by the invasive species (humans) basically destroying a whole planet of floura and fauna just to reach an expensive mineral so personally i think the movie fits right into the animal kingdom way of thinking, sort of like the message kali river rapids puts over except this will be on a whole other level

You can say goodbye to Beastly Kingdom ever happening – it just got replaced with Pandora. I’m sure it will be an entire themed land to go head-to-head with Potter. Wouldn’t it be cool if they could do the hanging rocks – that will probably be done with a Soarin’ type attraction. Now they will have to replace the dragon on the AK logo with a Mountain Banshee.

I can’t really see this a “Harry Potter competitor”…by the time the ‘Avatar’ world begins to open The Wizarding World will be 6 years old and the last of the Harry Potter films will have been out for 5 years. I just don’t see there being a HUGE competition factor there.

It would definetly have to be a dark ride semi roller coaster type ride. With the drops coming off the floating moutains and trees houses. Animatronics would be a given and the ride cars would be like the dragons they fly on in the movie.

Really? I am not impressed by this idea at all. Mostly because I really did not like the movie. Then again, when I watched the movie I did feel it was a little too much like Pocahontas for me. (You know, strange man comes into strange land, falls in love with girl from land, war breaks out, man help saves the girl’s people/species…)

I’m totally on the side of “let’s wait and see how this turns out’. I mean, I know in my heart that Disney has the ability to create a truly magical Pandora, and make it come alive like everything else. Let’s see what they’ve got in store for us. Good luck, guys!