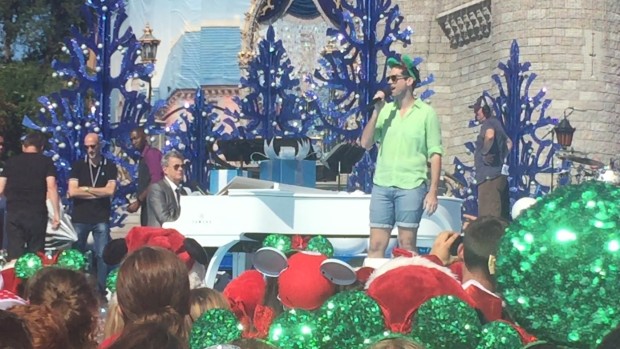 It’s not uncommon for there to be plenty of downtime between performances during the taping for the annual Disney Christmas Day parade every year, but this year during one instance, a truly amazing moment happened for both the crowd and for one lucky individual.

While waiting for Ariana Grande to arrive for her scheduled performances for the Disney Parks Unforgettable Christmas Celebration, composer David Foster, who was playing piano for several of the artists during the special, was interacting with the crowd and asking if anyone would like to sing from the crowd. Several guests got the chance to take the mic and sing songs like Jingle Bells and Let It Go. Then Rhett Wheeler got the mic.

He asked if he could sing one of Foster’s songs, “The Prayer”. When he started to sing, there was an audible gasp from the audience. After about 10 or so seconds, Foster told him to stop and immediately get on the stage to perform the song. The crowd went nuts and Wheeler made his way to the stage.

Below you can see our video of his full performance, as well as video that Wheeler himself recorded when warm-up host Mark Daniel took video of him on stage with David Foster.

It’s an unforgettable moment that no one involved will likely forget anytime soon – fitting with the name of this year’s Christmas Day show: Disney Parks Unforgettable Christmas Celebration is set to air Christmas morning on ABC.