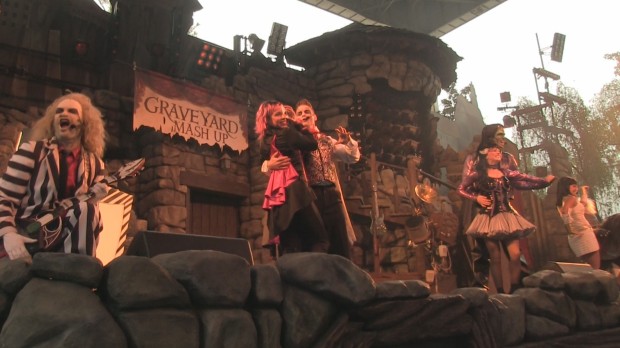 After about a month of downtime, Beetlejuice’s Graveyard Review has reopened at Universal Orlando with an update to the 20 plus year old show.

The original Beetlejuice show ran at Universal Studios Florida from 1992-2002. From 2002-2006 a version ran that originated in Japan, which introduced guests to generic versions of the Hip & Hop characters. In 2006 a third version debuted which made references to the original show and made Hip & Hop fearleaders (cheerleaders). That version ran until earlier this year, when Universal announced it would go down for a short time to be retooled into the version that debuted today, Feb. 8, 2014.

This fourth version takes out Hip & Hop and replaces them with a female Mummy (Cleopatra) and Phantom (Phantasia). The story revolves around a Mash Up party where the Universal Monsters come together to perform a mash up of songs mostly from the ’80s, with a few modern hits thrown in.

You can see a preview of the newest Beetlejuice show below:

For those who don’t mind being spoiled, here’s the full version of the updated Beetlejuice show:

If you miss the version that ran from 2006-2013, you can see that full show below, shot from two angles:

Just watched this show and I have to say I am not impressed at all, why do they insist on changing something that was so amazing already. The new show is terrible compared to the previous version. I used to be able to watch Beetlejuice Graveyard Revue more than once a day and now I don’t think I ever want to see this again. BAD move Universal.

I could not agree with you more, I used to look forward to going to beetlejuice more than once a day aswell. the new show is diabolical and needs to be changed, so I will be writing to universal for them to change it again, I hope you do to along with many other people. IT MUST BE CHANGED

Way off the mark in almost every aspect.
Weaker humor, choreography, singing and song choices.

A little embarrassing to be honest, this was always one of our favorite shows!

This new show is terrible. Every aspect is bad. Cleopatra can’t sing either.

simply awful. everyone needs to write and complain to universal for them to change it back!!!

The new show is embarrassingly awful. I used to love the old show, and would try to see it at least once every visit. This new show is horribly watered down, has ZERO audience participation/interaction and whoever choreographed this new show should be fired. Its a mess, complete and utter mess, the new “talent” cant hold a tune either.

OMG!!! This show was awful! How could they butcher such a great show like that? Everyone around us was in disbelief when the show was over! Worst decision by a corporation since Coke changed their recipe! Universal change it back and go find your old performers and pay them double to come back!

This is so so bad the old show was amazing kept you laughing and participating the whole way through and now beetlejuice might as well not be their as he hardly says 2 words! I used to see every show in the day coz it never got boring and the jokes got funnier every time now I won’t bother going at all. I’d rather they closed the show then see it turn to this humiliating show. They say it’s more family friendly now but that’s what’s disney is for universals the place adults can have a laugh and I doubt the kids even knew what was going on before they just listened to the music bring the old one back or close it but don’t destroy it with this!

Thank you! I thought I was the only one who hated this new show. The old show was so good.