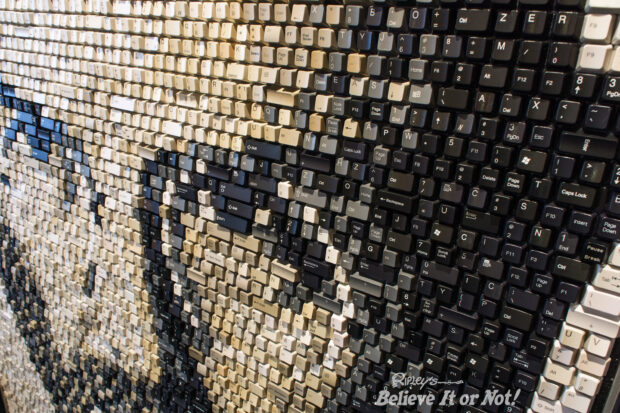 A “key” piece has been acquired for the collection of oddities at Ripley’s Believe It or Not – a portrait of Apple co-founder Steve Jobs made from almost 6,000 computer keys (5,892 to be exact).

The portrait was made by Orlando artist Doug Powell, who spent more than 200 hours creating it. Powell amassed the computer keys by going to garage sales, putting ads on Craigslist and finally discovering a collection center full of discarded keyboards.

Powell had to hose down each keyboard, pry off each key and grind the post off the back. The keys were then sorted by color – black, brown, gray, yellow and shades of off-white. In creating Jobs, he started with the eyes and worked his way up and out from there. 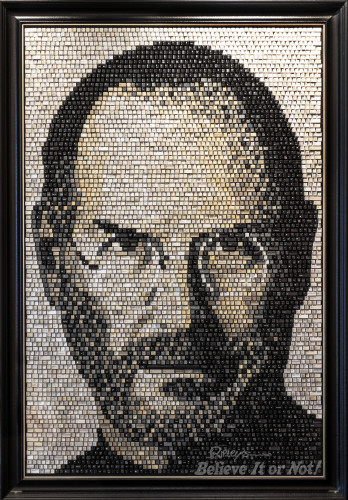 The portrait even contains hidden words – Macintosh, Apple, Pixar, iTunes – as well as a couple of Steve Jobs quotes.

Powell says of his creation: “Steve Jobs said it best when he said, ‘I want to put a ding in the universe.’ I want the viewer to ponder the infinite, profound combination of thoughts, ideas and inspirations that have surely passed through this ‘intellectual porthole,’ and all made possible with just the common computer key.”

“Ripley’s has several of Doug’s mosaics in our museums, some made from jigsaw puzzle pieces and some from computer keys,” said Edward Meyer, Ripley’s VP of Exhibits and Archives. “I think this is his best work yet, as it’s such a large portrait and it captures Steve Jobs perfectly. He really looks like he is staring right at you.”

The portrait is currently at Ripley’s corporate headquarters in Orlando, and will eventually go on display in one of Ripley’s attractions around the world.