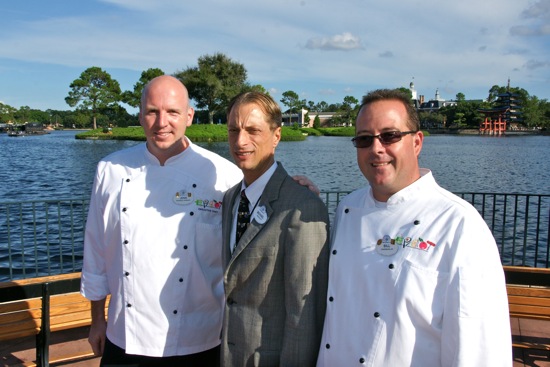 We recently had a chance to take a look behind-the-scenes at Epcot’s International Food and Wine Festival. Disney is gearing up for the festival’s 14th year and is producing an impressive new menu of foods from around the world, with 60 to 70 new items this year.

In today’s sneak peek, we spoke with Epcot Executive Chef Jens Dahlmann (above left), Festival Project Manager Michael Jenner (center), and Special Events and Quick Service Chef Bill Brown (right), all of whom have been instrumental in the event’s preparation in recent years. They walked us through the World Showplace Pavilion and its backstage areas where the festival food is prepared.

Year after year, the Epcot International Food and Wine Festival brings a wide assortment of flavors from around the world to theme park guests. “The whole idea was to be authentic and to be respectful to the cultures,” said Dahlmann. “This year if you walk the promenade or pass a kiosk, it has the aromas, the smells. Once you taste [the food], you’re going to get a real, authentic taste.”

Building upon 13 years of festival history, the chefs decided to retool many aspects of how the event is run and what kinds of foods are offered. “We really retooled the menu this year,” said Brown. “Some of the old favorites have been hanging out for a few years and this is the year that we just said, ‘Let’s take this year to really change it up quite a bit.’ So we kept a few of the standards and everything else is brand new.”

Some of the returning items from the past include the Canadian Cheddar Cheese Soup, which was the most popular item (and biggest seller) last year with around 36,000 sold. Also returning are the escargot from France, sushi rolls from Japan, pot stickers from China and kielbasa and pierogi from Poland, which was the number two seller last year.

To go with this year’s menu of 70 percent new items, three new kiosks are being added: Thailand, Brazil and Champagne and Desserts, which will feature sparkling wines and desserts from all over the world.

Even the event guidebooks and maps have been retooled this year. “We got from our guest feedback that what [guests] would do is get the full festival guide, rip out the center, which was the guide map of all the kiosks, and then throw the rest away,” said Festival Project Manager Michael Jenner. Rather than printing 350,000 full guides as they did last year, only 50,000 of these guides are being printed this year. Most guests will want to pass on these lengthier guides and simply pick up the new weekly fold-out maps which give information about the week’s activities and help easily locate the various foods and kiosks around the World Showcase.

Food preparation for all of the kiosks in the Festival is done in the catering and convention kitchen, located just behind the World Showplace Pavilion (home of the festival’s Party for the Senses). During the rest of the year, the kitchen caters all four Walt Disney World theme parks.

During the festival, an additional 20 to 25 cast members move in to ready the foods to be transported to the kiosks. Most foods are initially prepped in this kitchen but finished off within the kiosks, allowing them to be hot and fresh for each guest. It’s also in this kitchen that the chefs tweak the recipes all the way until the day before the festival begins, both perfecting the ingredients, as well as how they are prepared. “We’re getting more and more guests in. The throughput is really something that we focus on,” said Chef Bill Brown. “Even when we develop items, we look at how many steps it’s going to take to put that plate together and get it into the hands of our guests.”

Not all recipes are developed by the head chefs. Some come from ideas given by cast members. “In some of the kiosks we’ve used our cast members to help us as well,” explained Brown. “They’re from those areas. We’ve gone to them and said, ‘Cook for us. Cook your authentic meal just like your mom has done over the years. Bring those recipes in and let us see them.'” This year, cast member-inspired dishes include the arroz con pollo (chicken and rice) from Puerto Rico, green papaya salad with shrimp from Thailand and the corn and cheese arepa from Chile.

So how are some of the new menu items for this year’s Food and Wine Festival?

Here are just a few that we had a chance to sample today: 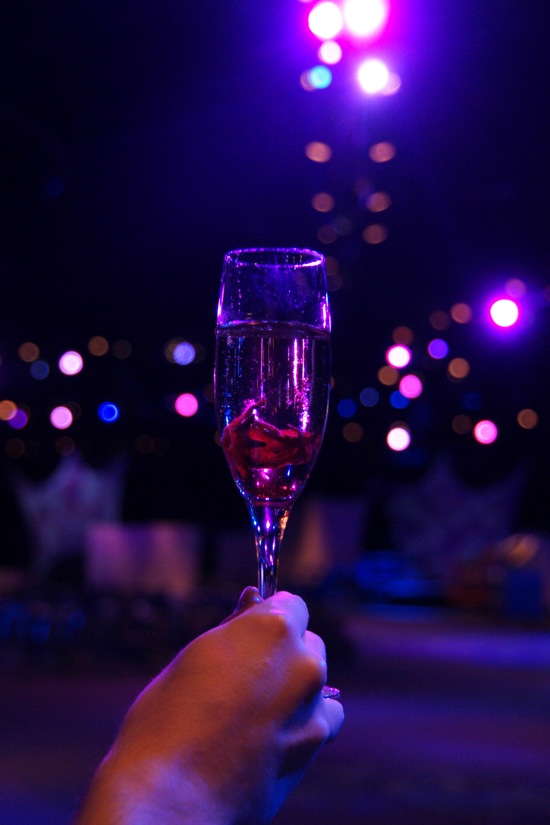 This Wild Hibiscus sparkling beverage is available only at the Party for the Senses in the new Wine View Lounge. It features a candied wild hibiscus flower in Martini & Rossi Prosecco. While I’m not much of a drinker, I did enjoy the sweet flavor of this beverage. The parties are an extra-cost event. While none of the items at the kiosks are free, you can access all of them with your theme park admission. We’ll have much more on the Party of the Senses and the new Wine View Lounge later this week after the first party on Sept. 26. 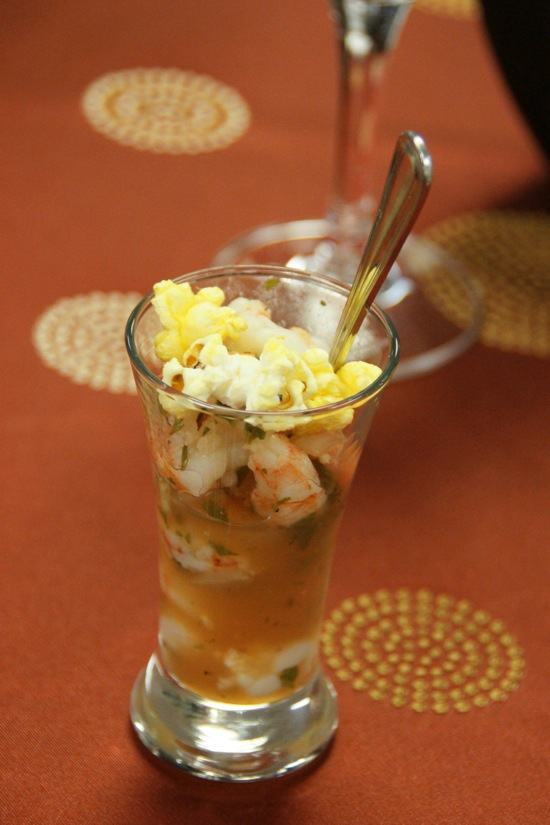 Here’s a look at the Rock Shrimp Ceviche from Chile ($4.75). I generally don’t eat seafood, so I can’t personally comment on this one. 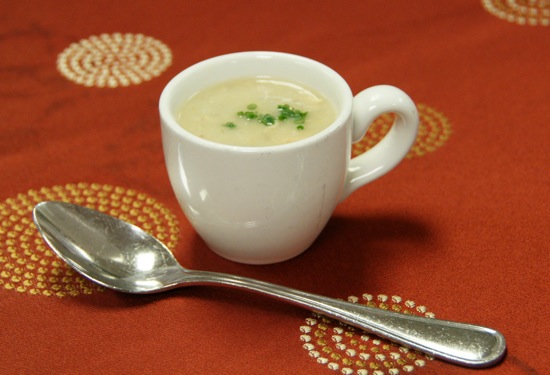 The Chicken and Coconut Soup with mushrooms, lemongrass and ginger from Thailand ($3.25) is a unique take on your standard chicken soup. Infused with the broth comes a subtle hint of coconut and a bit of sweetness from the ginger. If you’re looking for a hearty soup while walking through Epcot, this is a great way to go (that is, if you can pass up the Canadian Cheddar Cheese Soup). 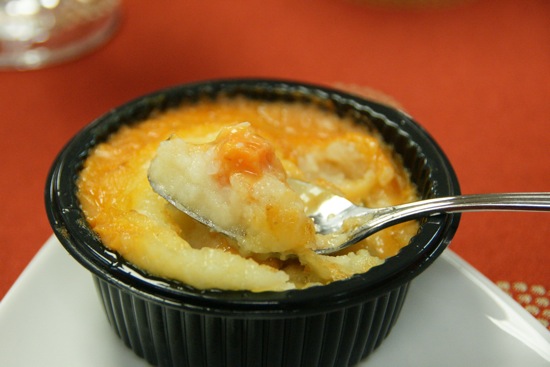 Even with my aversion to seafood, I couldn’t pass up sampling this take-off of Shepherd’s Pie called the Lobster & Scallop Fisherman’s Pie from Ireland ($5.50). The portion size is big and the “seafood taste” is minimal. The chefs believe this is going to be one of the biggest hits for 2009’s festival and I would have to agree. 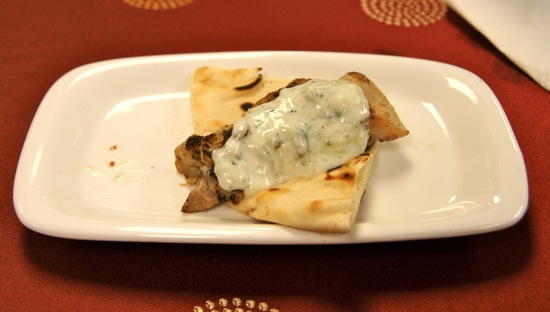 One of the goals for this year’s festival was to improve the Greece kiosk, adding the Chicken Souvlaki with Tzatziki ($4) to bring inviting aromas to guests walking by. This new item will definitely become one of my must-buys each year. The warm pita and cool Tzatziki sauce perfectly compliment the moist chicken within. 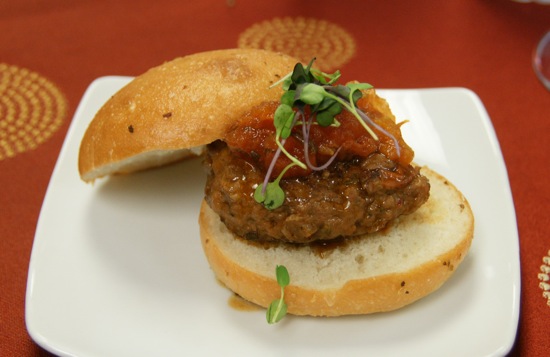 My favorite sampled item of the day was the new Lamb Slider with tomato chutney from New Zealand ($4.50). I’m obviously partial to lamb burgers as it was also my favorite item that I sampled at Kouzzina a few days ago, though I have to say that the Food and Wine Festival variation was even better. From the fresh focaccia roll to the ultra-soft lamb patty, the Lamb Slider is a winner through and through. I could eat three or four of them in one sitting. 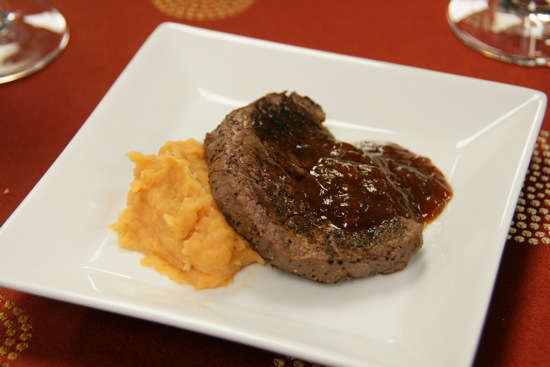 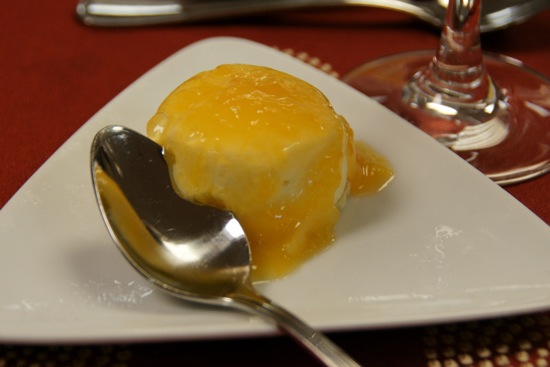 From the Champagne and Desserts kiosk came this Frozen Grand Marnier Parfait with orange coulis ($3.50). I can best describe it as having the flavor of an orange creamsicle but expertly prepared as a sophisticated dessert. This cold treat will be a huge hit during the hotter days of the Food and Wine Festival. 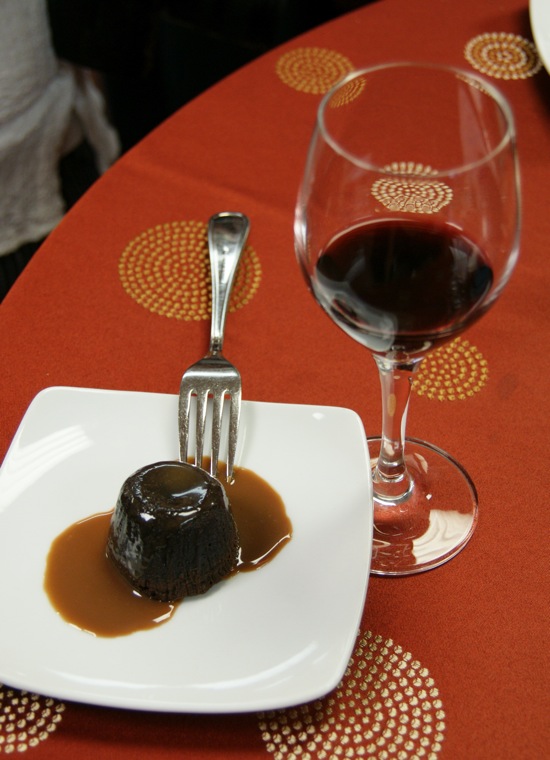 To top it all off, we were served a Chocolate Lava Cake with Baileys ganache which is baked fresh at the Ireland kiosk and served warm to guests. This dessert is quite rich and, while small in size, is more than large enough to satisfy any sweet tooth. 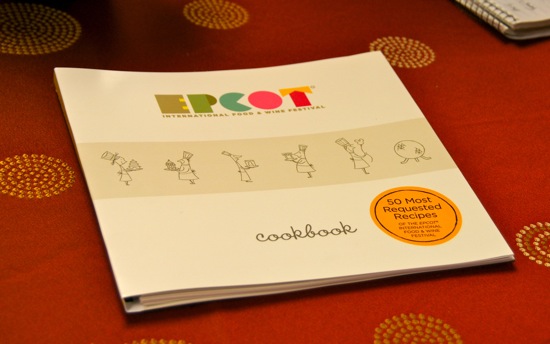 Many visitors to the Epcot International Food and Wine Festival want to know how to prepare some of the unique and flavorful dishes that are served. New this year, 50 of the most popular recipes have been published in a cookbook that is available at Epcot during the festival for around $15. The recipes have been reworked for home kitchens.

In addition to all of the great food the event has to offer, don’t miss the Eat to the Beat concert series, which is included with Epcot admission. Showtimes are daily at 5:15, 6:30 and 7:45 p.m.. Here’s the lineup of this year’s musical acts:

The 14th annual International Food and Wine Festival begins on Sept. 25 and runs daily through Nov. 8.

Is that popcorn in the ceviche? Quite unconventional; puts a twist on “popcorn shrimp”. Next to sushi, ceviche may be one of the best ways to experience fresh seafood since it’s not cooked with heat – citrus acids “cook” it!

Classic attraction to reopen Aug. 15 as...

A who-bilation of holiday fun at the...