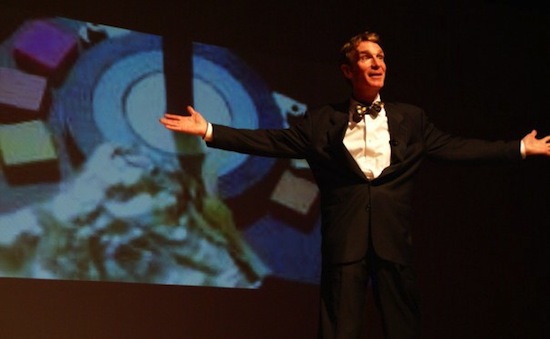 You can see him every day at DisneyQuest helping guests build their own Cyberspace Mountain roller coaster and at Epcot in Ellen’s Energy Adventure. But next Wednesday, Feb. 23, Bill Nye The Science Guy will be live and in person in Innoventions West at Epcot as part of National Engineers Week.

This year marks the 60th Anniversary of National Engineers Week, which celebrates math, science and engineering. From Feb. 21 to 25, Innoventions will be celebrating the many contributions that engineers (and Imagineers) make to our daily lives by hosting E-Week activities. Speakers from Raytheon, Underwriters Laboratories, Liberty Mutual & Reedy Creek Fire Department and Walt Disney Ride & Show Engineering will be hosting interactive presentations on how engineering turns ideas into reality.

Presentations such as “Dancing Spaghetti”, “Polishing Pennies”, “Choke the Smoke” and “Outrageous Ooze” will run continually throughout each day and last approximately 5 to 10 minutes.

Bill Nye The Science Guy will be appearing in the flex space in Innoventions West at 11 a.m., noon, 1 and 2 p.m. on Feb. 23. A mechanical engineer by education, his passion for math and science has been translated into a nationally broadcast television series, five children books and countless personal appearances. Currently, Nye is a Disney Educational Productions (DEP) programming host. All other presentations will be hosted in each sponsor’s venue.

Could booking Disney ride reservations from home work for all?