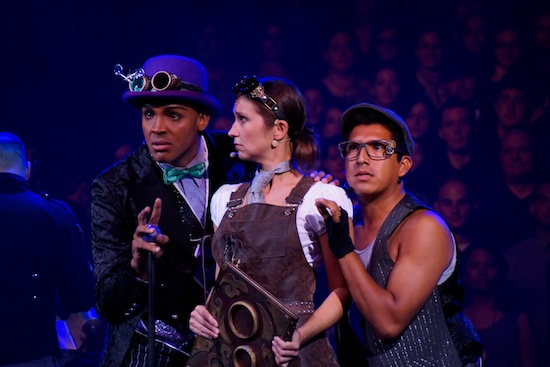 If you’re a fan of broadway style shows and you’ll be in the Orlando area this week, you won’t want to miss the great acting, singing and dancing in the Disney cast member production of Finding Wonderland. Plus it’s all for a good cause.

This year’s show is a celebration of the best moments from the last decade of Encore, and includes many Disney classic songs and Broadway hits. In Finding Wonderland
you’ll follow the journey of Mary Anne as she encounters variations of familiar characters from Alice in Wonderland as she tries to figure out if everything she knows is a dream.

Because every member of Encore is a volunteer, all proceeds from the group’s concerts go directly to a Central Florida charity selected by the group. This year’s charity is A Better Life Pet Rescue, founded by two Disney World cast members. Since the group’s inception, Encore has raised over $175,000 for Central Florida organizations.

While many Encore members work in entertainment professionally, more than half of the group have daily roles in other lines of business at Walt Disney World, from park and resort operations to marketing, public affairs and information technology. But you won’t be able to tell. The show is a full-on professional production.

Remaining show times are 7:30 p.m. on July 16, 19, 20, 21 and 22. The shows are performed at the Premier Theater at Disney’s Hollywood Studios. Theme park admission is not needed. Your Finding Wonderland ticket gets you into the park starting at 6:45 p.m., but parking is not included. Ticket prices range from $15 to $35 for adults. Children under the age of 10 are $10.

Visit encorecentral.org for more information and to purchase tickets. You can also find Encore on Facebook and Twitter.

Here’s a photo gallery from the opening night performance:

Come on Down! The Price is Right Live is coming to Lakeland

I was at the opening night .it was marvelous i will do it again.