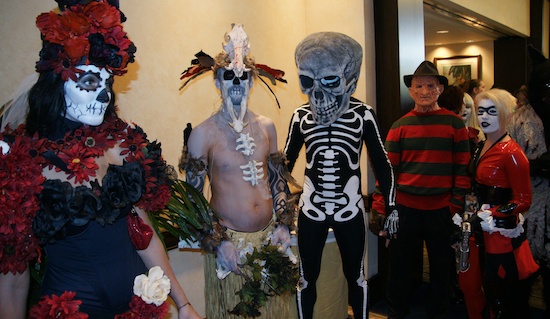 Horror and zombie fans will want to be at the Wyndham Orlando Resort Memorial Day weekend, May 27 to 29. Spooky Empire, the organization behind the annual Ultimate Horror Weekend each fall, has added a second show, May-Hem.

The event will feature a 30th Anniversary reunion of The Evil Dead cast, featuring Bruce Campbell, as well as the Ladies of Evil Dead. Other guests include cast members from Army of Darkness, Evil Dead II, the Boondock Saints films, and the AMC series Walking Dead. Anthony Michael Hall, of Breakfast Club fame and the TV series The Dead Zone, will also be appearing.

In addition to other celebrities, DJs, parties and an original Zombie Costume Contest, panels and Q&As hosted by the celebrity guests will also be held.

Tickets are $30 to $35 for one-day passes and $50 for the whole weekend, with VIP packages priced at $199. The Wyndham is offering a special price of $59 a night for guests who mention Spooky Empire when making reservations.

For more information and to order tickets, visit the Spooky Empire website.