What’s cuter than a baby cheetah? A baby cheetah and a puppy. Even cuter is when they’re playing together like pals. But what to call them? You can help Busch Gardens pick a name. 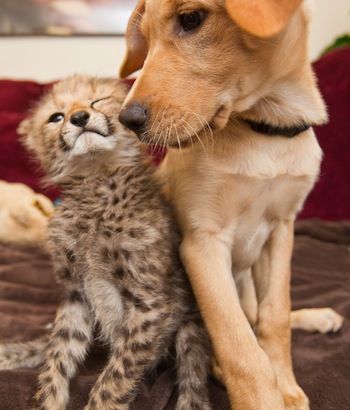 Just a month after Busch Gardens took in a cheetah cub whose mother wasn’t caring for it, the park’s animal care team has identified the perfect four-legged friend for the 8-week-old cat: a 16-week old female yellow labrador puppy.

The two were introduced recently and have been spending supervised play times together each day. Eventually, the pair will live together and even travel together, helping the park’s education team teaching the public about the plight of cheetahs in the wild and Busch Gardens’ conservation efforts.

Although this is Busch Gardens’ first cub-and-puppy combo, it is not uncommon in the zoological community for a single cheetah to be raised with a canine companion. “Male cheetahs are social and often live together in coalitions,” said Tim Smith, one of Busch Gardens’ animal curators. “This social bond will be a very similar relationship, and they will be together for life.” 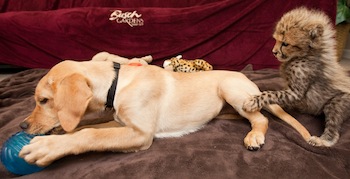 Beginning Saturday, the cub and puppy will move to Jambo Junction in the Nairobi area of the park, where guests will be able to see them at select times throughout the day. Guests are also invited to help name the pair. Starting today, the public can “like” the Busch Gardens Facebook page and vote for their favorite names. The polls will close at noon on Monday, April 18, 2011 and the winners will be announced that afternoon.

Cheetahs are included on both the International Union for Conservation of Nature (IUCN) list of vulnerable species as well as on the US Endangered Species Act list of threatened species. Only approximately 12,400 cheetahs remain in the wild.

OK, I didn’t know the pup was female. so name them Felice (the puppy) and Oscar (the Cheetah.

I have gone ahead and published https://attractionsmagazine.com/blog/2011/04/14/busch-gardens… at Digg so my friends can see it too.
I simply used Busch Gardens’ baby cheetah gets a puppy pal and you can help name them – Orlando Attractions Magazine as the entry title in my favourite bookmark, as I figured if it is good enough for you to title your blog post that, then you probably would like to see it bookmarked the same way.