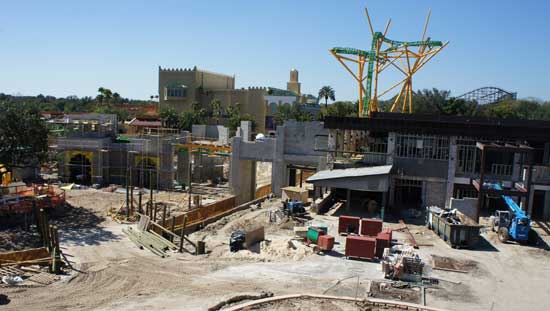 Track installation for the new Cheetah Hunt roller coaster at Busch Gardens will soon be done. This doesn’t mean the ride is ready, but the track will be in place so work on landscaping and theme elements can continue. Full ride construction won’t be complete for several more weeks, as you can tell by the state of the construction site at the Cheetah Hunt station above.

It’s been great fun to visit Busch Gardens week after week and see the coaster be assembled. Every week there’s another surprise to admire and savor. We’ve been collecting photos so you too can see the week to week changes at a glance. This article is going to move from north to south along the coaster. From the Rhino Rally area in Nairobi, back to the station area near Morocco. 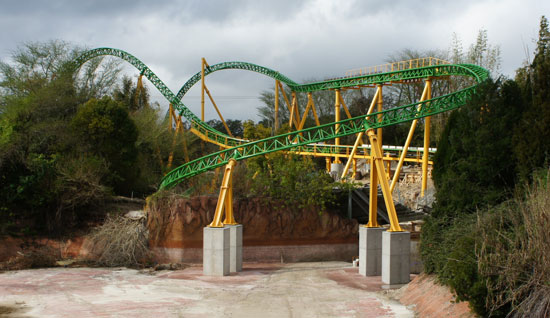 This is the far north end of Cheetah Hunt, over what used to be a water element of the Rhino Rally ride. 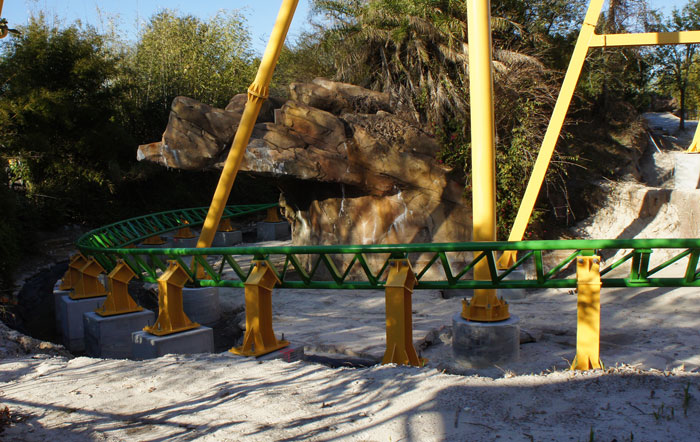 The track zips past this rock overhang. 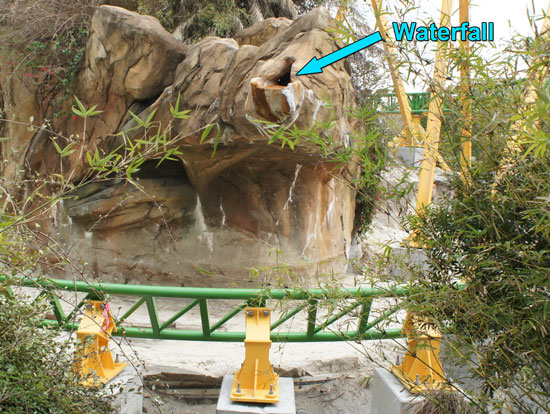 There is a chance the waterfall from this overhang will carry in the wind as the coaster cars speed by.

Get your bearings now. See how the Cheetah Hunt track in the foreground is diving low and underground to the right? 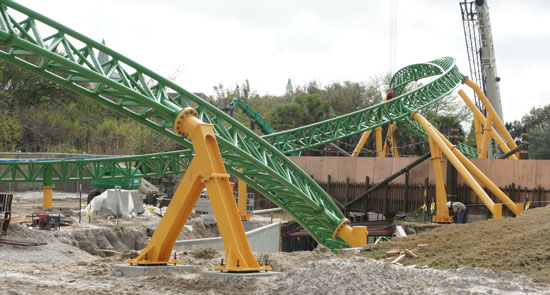 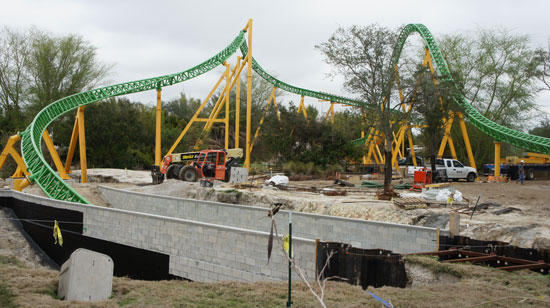 Another view of the track that dives under the pedestrian bridge, looking back toward Rhino Rally. 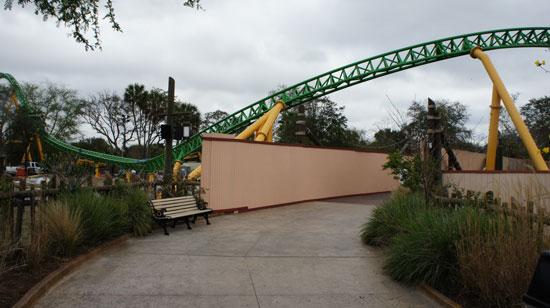 This shows the other track element, rising over the pedestrian bridge.

Now comes a series of photos that show some track installation, and week to week changes. This track element is about to be raised by the crane. 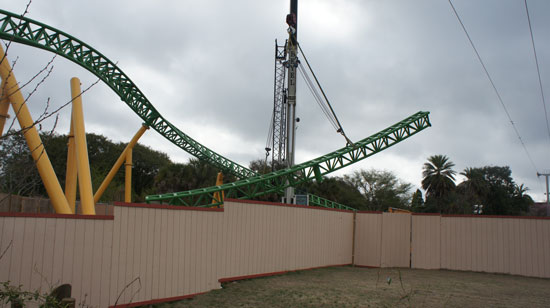 The track has been raised and is now being positioned. Several minutes after this photo was taken, the track was no longer in view. It was behind the wall and below, to be connected with track already under the bridge. 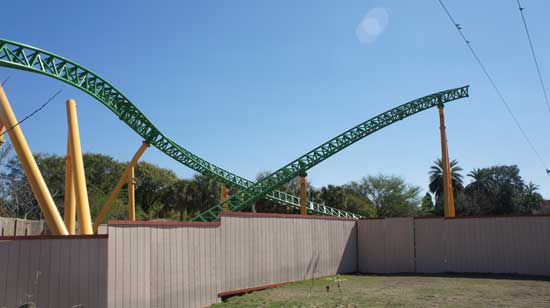 In the week that followed, a few more sections of track were added. Do you see where the track is going?

Another teaser of where the track is going. Note the skyway tower … 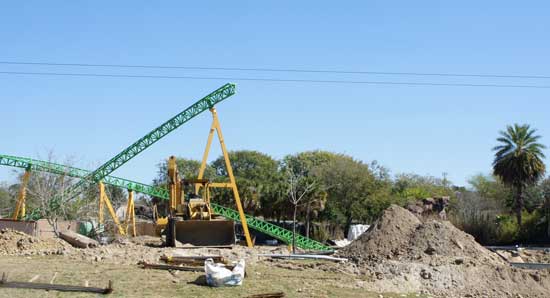 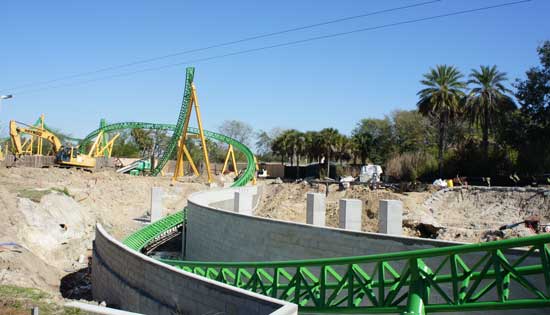 This area of track has been especially interesting to watch week after week. This is the view from Feb 13. 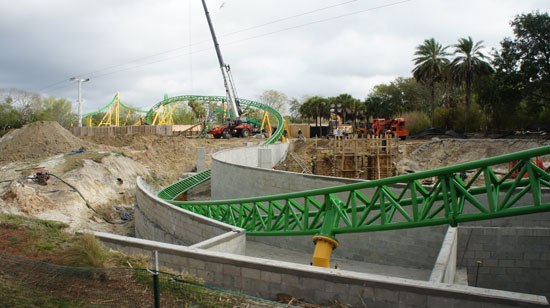 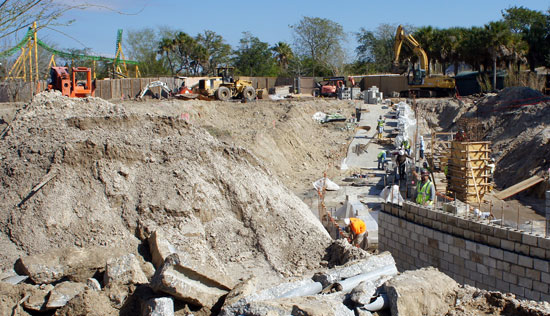 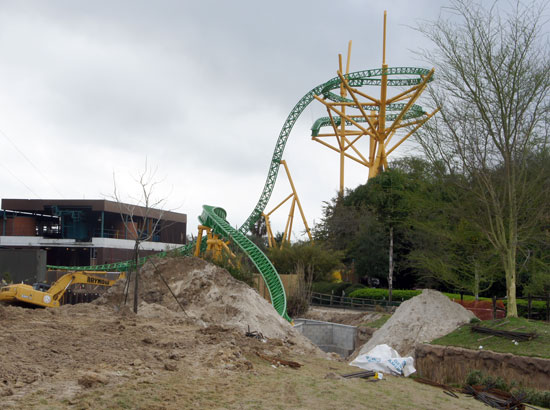 Looking back south again, note the track rising from the ground. That was the last below grade section of the ride. This track is returning to the Cheetah Hunt station. 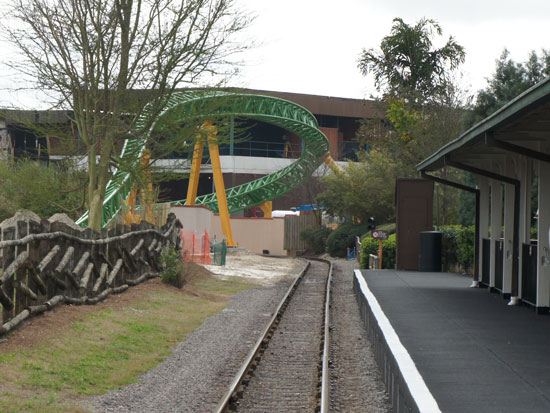 Same track, on its way into the Cheetah Hunt station, as seen with a zoom lens from the train pedestrian crossing. 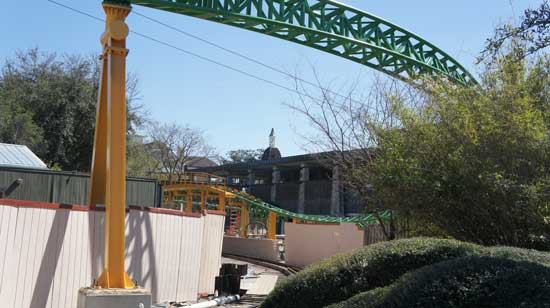 The final section of track into the brake run. 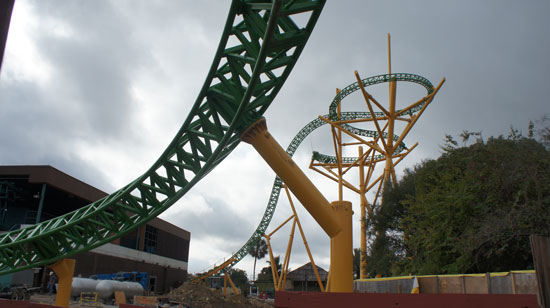 View from the steam train, as the roller coaster track passes overhead. 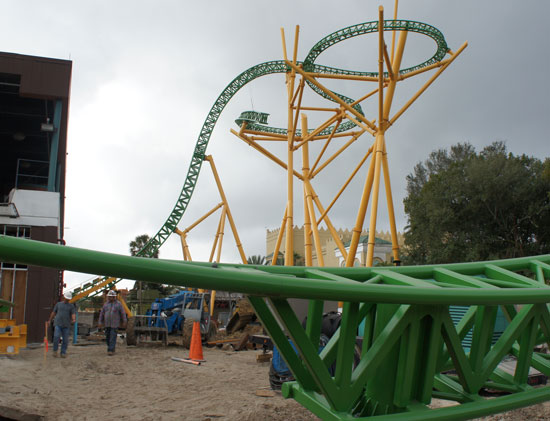 An interesting shot capturing how the track changes format/structure before entering the station. 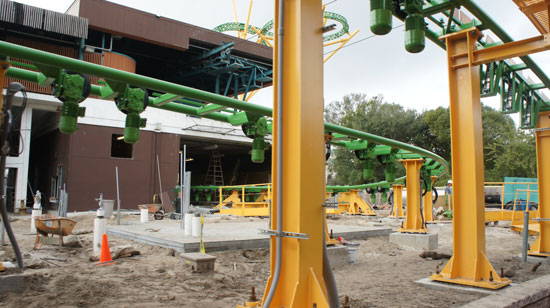 The track overhead is returning to the station. Descending to the lower level is track for the trains to access a service area below the skyway boarding platform. Note the ovals below the track. These are electric motors attached to rubber wheels (also visible) that transport trains to and from the service area. 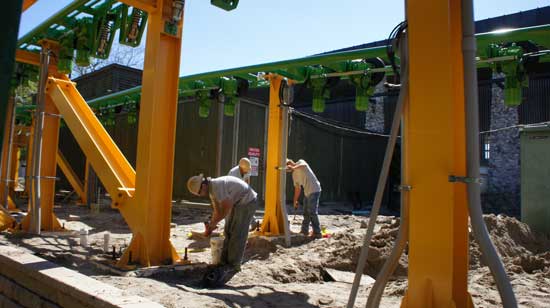 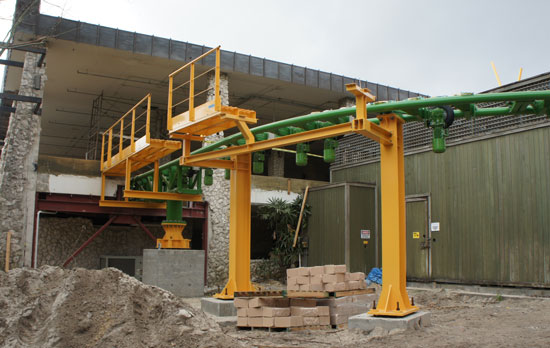 The track enters the station. 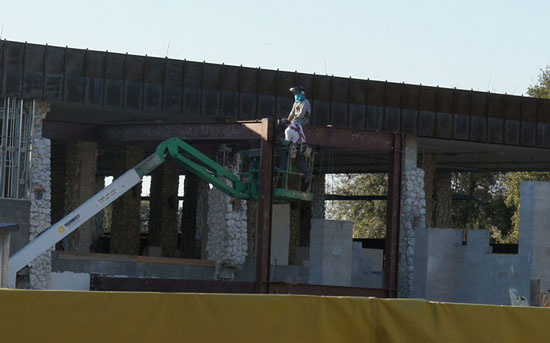 Two weeks ago a welder was connecting these I-beams at the Cheetah Hunt station. 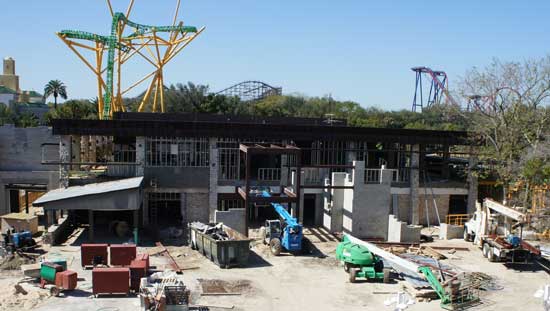 The current state of the Cheetah Hunt station.

Now we’re at the station, ready to imagine the riding starting. Follow the arrows for how Cheetah Hunt begins, especially how it immediately dives below grade. 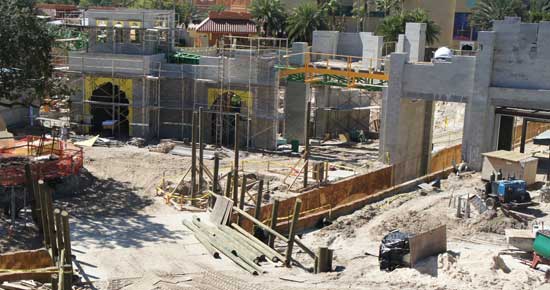 Detail look at the below grade area. 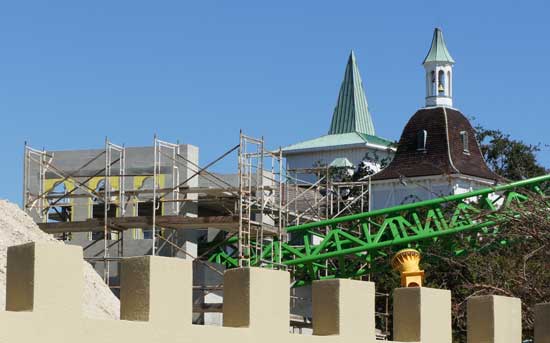 An opposite side view of the theming in the station area. 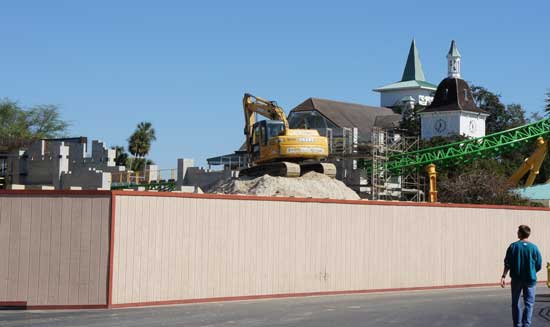 There was a surprise at the site this week – a big pile of dirt. 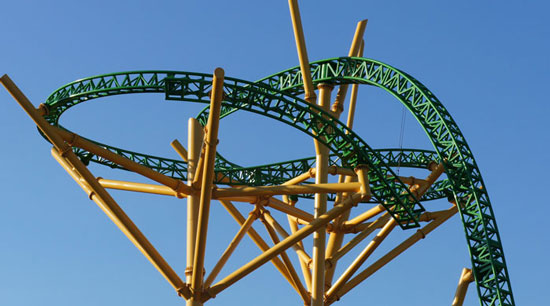 It’s likely they are working toward the elevated figure eight for a topping off ceremony. In roller coaster construction (and building construction in general) they often raise the final piece of structure with all of the workers present to witness the moment. 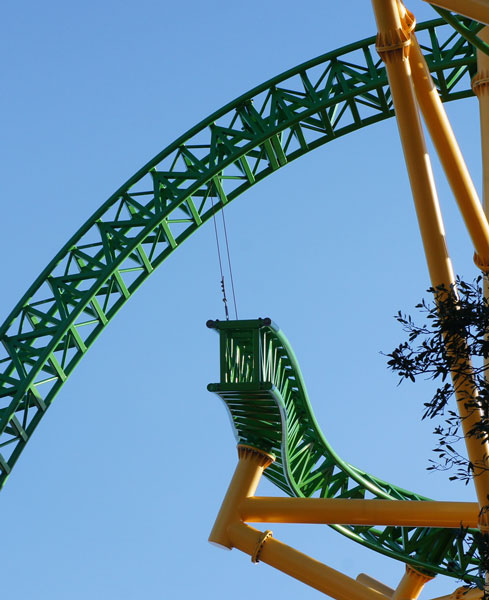 A temporary cable that will eventually be removed. 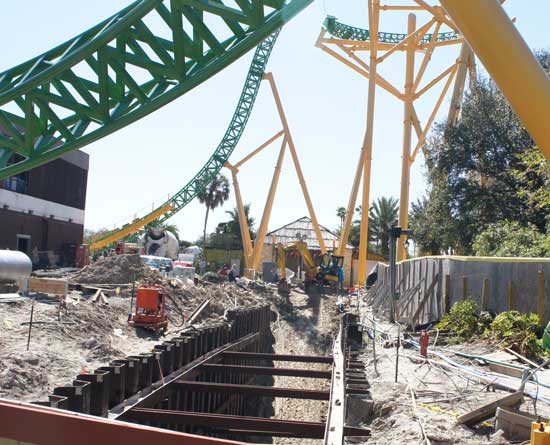 The drop from the elevated Figure eight seems to be headed into this excavation. 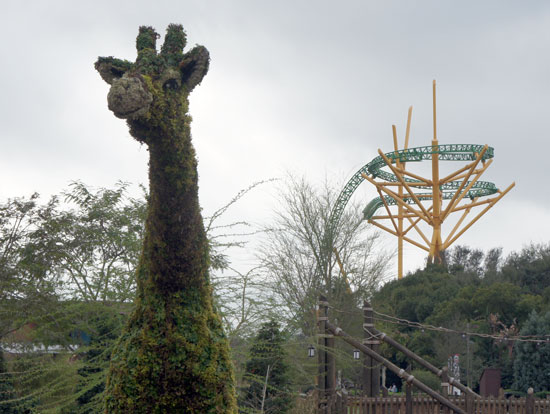 This giraffe seems to be smiling – knowing the fun we’ll soon be having while riding Cheetah Hunt!